Many of the same challenges are faced by compact waterproof cameras and other compact electronic devices. It is not always easy to fit strong components into limited places. If you want to do more than mere waterproofing, it will be a very difficult task. 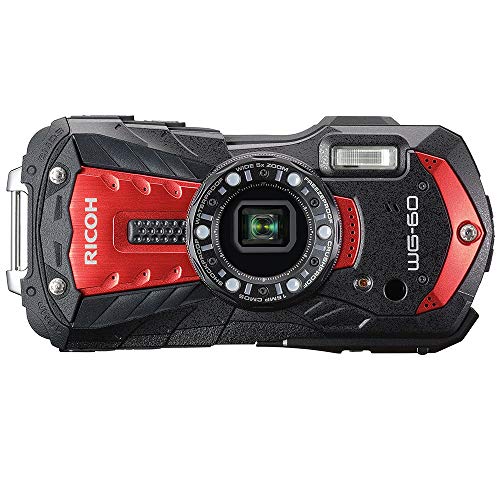 There are occasions when consumers choose waterproof cameras because they are afraid that their camera may be exposed to even a trace amount of water at some point.

On the other hand, sometimes consumers purchase waterproof cameras since they are aware that their camera will be exposed to water regularly. It may seem like a trivial difference, but in reality, we are comparing two cameras that couldn’t be more different.

When you manufacture a camera that does not appear like every other model currently available, it tends to stand out from the competition.

Regardless matter how you feel about the Ricoh WG-60, you cannot deny that it possesses a look that is all their own. The red model, in particular, has a design that makes it appear more of a fashion item than a camera. It has a shape that is similar to that of some high-end clocks.

The WG-60 Waterproof Digital Camera has dimensions of 4.8 by 1.2 by 2.4 inches, which places it in the same ballpark as a smartphone in terms of portability. It weighs around 6.8 ounces when you factor in both the battery and a memory card, which is a weight that competes favorably with that of a smartphone.

There is a red and black version of the WG-60. The red variation is primarily black, but it uses red accents to give it a trendy appearance.

The black model appears to be more like an everyday camera, despite the fact that it is still covered with angular and grooved detailing. In both cases, the chassis is made of a combination of aluminum and a type of plastic called ABS that has been treated to make it more durable.

Combined, these materials make it possible to create a design that is not only lightweight but also resistant to crushing and can endure forces of around 100 kg. If you were to smash the WG-60 Waterproof Digital Camera with a hammer, you might generate around 50 kilos of force, according to some rough calculations.

Even while you definitely shouldn’t start whacking your camera with a hammer, there’s no need to flinch in abject terror if you drop the camera on some cement by mistake.

A big LCD panel measuring 2.7 inches across covers almost the entirety of the backside of the WG-60. If you want a larger viewing space for previewing your footage, you can link the camera to a larger monitor using a Type-D HDMI connector if you want something bigger than it offers. However, it does give a great viewing space for previewing your work.

If the camera weren’t very good, there wouldn’t be much purpose in putting in all that extra effort to protect yourself. In point of fact, for a compact that is water resistant, the performance is rather astounding. The 1/2.3-inch CMOS sensor has a resolution of 16 megapixels and makes it possible to take a broad variety of low-noise photos.

You can take still photographs, as well as videos in high HD at 30 frames per second. Several high-speed and slow-motion modes, in addition to an underwater option, are included in this video recording software.

In addition, each of them can make use of the movie shake-reduction tools that are available to improve the watchability of handheld shots.

The WG-60 is equipped with a 5x optical zoom that starts at 28mm. A digital zoom, roughly 7 times stronger, enables you to get more out of each photo you take.

In addition to that, the WG-60 comes with several different effective focus modes. Macro, 1cm macro, pan focus, infinity, manual focus, and standard are some of the other types that are included.

It is not rare for a small camera to have fantastic photo modes in this day and age; what is unique is having so many of those photo modes also operate on movies. That is one of a kind.

Cameras with an extensive feature set, such as the Ricoh WG-60, provide great versatility. This package comes with a total of 25 different shooting modes.

Flower, pet, fireworks, portrait, sport, cuisine, night scene, underwater, landscape, kids, snow, and high dynamic range (HDR) are some categories available. Each mode, as you might be able to see by now, has been fine-tuned to work in harmony with a certain kind of activity.

For instance, switching to the underwater setting will make the colors that are seen underwater look more realistic. It does this mostly by introducing various hues of red into the scene. This is because reds tend to look muddy or washed out in photographs taken underwater.

The bulk of these modes are rather easy to understand on their own, and each one can be customized to cater to your own needs and preferences as far as inventiveness is concerned.

In addition, the Ricoh WG-60 Waterproof Digital Camera has built-in movie editing capabilities. They will be able to assist you in creating stills from the various frames of your film or in separating them. It is not a replacement for a full-fledged video editing application, but it can help you with some of the more fundamental aspects of the editing process.

The camera layout is largely standardized, and with very few exceptions, it seems to be the same on virtually every camera. The button that operates the shutter is located just where you’d expect it to be, but right next to it is the button that controls the power. Because the power button is smaller than the shutter button, you won’t accidentally hit the wrong button even if you aren’t paying close attention. Both are textured to assist signal when your finger is in the correct position and to offer you greater control over the pressure-sensitive shutter. This is done so that you may take better pictures.

On the right-hand side of the WG-60, most of the remaining controls are crammed together. Anyone who has used a camera in the last thirty years should be able to immediately recognize the symbols used for each button since their placement is organized and logical, and the icons themselves are easily recognizable. The typical suspects are there, such as a button for the flash, a button for the menu, buttons for zooming in and out, and so on.

The Ricoh WG-60 Waterproof Digital Camera is powered by a lithium-ion battery that can be recharged and switched out for a fresh one in a few seconds. A single battery should be able to power approximately 300 still images or 260 minutes of video recording before it needs to be replaced.

These estimates are based on the assumption that the temperature was constant. If you begin taking pictures in a chilly environment, it is important to keep in mind that the battery capacity will decrease. To keep everything running smoothly at this point, you should probably start carrying about a few spare batteries with you at all times.

The WG-60 produces low-noise photographs with a broad dynamic range that appear stunning even as prints because of its high-performance image processing engine and back-illuminated CMOS sensor that boasts exceptional optical efficiency and an effective 16 megapixel.