Also, we have prepared a list of mirrorless cameras that are under the range of $500. It starts from here:

Check Out: Best Lenses for Sony A6000

Sony A6000 24 megapixels CMOS sensor and the image processor can produce some high-quality images. Along with the images, the camera is suited really good for video applications such as Full HD recording. Sony A6000 intelligent fast hybrid Auto-Focus system use phase and control detection method to acquire focus as soon as the camera is placed on an individual or an item. 1080p recording can go up to 60 frames per second. Continuous shooting mode can capture them at 11 frames per second which is quite a useful feature in this price point.

Fujifilm X-A5 camera comes with a 24.2 Megapixels camera while weighing only 1.1 pounds, including the lens kit. The exceptional video capturing skill of the camera makes it stand out during comparisons with other cameras in the same price range. Fujifilm X-A5 is able to record a 4K video with 60 frames per second. The feature is not common in every other even in today’s time. The tilting 3 inches LCD touchscreen can be turned 180 degrees to take selfies. ISO sensitivity goes up to 12,800 and the battery life is capable of taking 450 pictures in a single charge that is outstanding. The camera kills every other DSLR in terms of its battery life and video recording.

The cameras perform outstanding while going through the videography content. The 4K content is captured at 30 frames per second just like every other modern tech camera. The electronic viewfinder is present for its enthusiasts. The camera performs absolutely well in low light situations as the ISO can shoot up to 25600. Like other modern-day cameras, it also comes with Wi-Fi. Below extension in the ISO can be observed to a number of 100. When talking about mirrorless cameras, the Olympus E-M10 Mark III is one good choice. The camera is a great package for the people who are looking to buy a camera under $500 and provides both well still and video capturing.

The CMOS sensor is rated at 24 megapixels. The continuous shooting rate exists at 8 frames per second. The whole system of the camera is speedy and accurate because it utilizes a 79 phase-detect Auto Focus. The camera has been noted widely for its video recording at multiple frame rates depending upon the situation. The translucent mirror technology is the exceptional feature of the camera because it allows the mirror to reflect the light on to the image and the auto-focus sensor to provide a precise performance.

It comes with a variety of new features that are normally not present in most of today’s camera. The price point and the feature play a fair game. The camera comes with a 24.2 megapixels CMOS sensor and the sensitivity of the ISO goes up to 25600. The camera offers video capturing at a resolution of 1080p with 60 frames per second. The LCD screen provides touch autofocus feature as well as the touch shoot feature. The built-in Wi-Fi provides a direct connection with mobile phones and printers. The camera uses a 77-point contrast-detection system. The camera comes with a relatively long battery that can capture more than 400 pictures in a single charge. 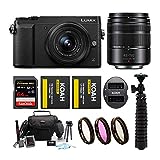 Panasonic Lumix GX85 comes with a Live MOS sensor with 16 Megapixels. The ultimate feature of this camera is the Ultra HD recording with 30 frames per second. The continuous shooting can go up to 10 frames per second with single-shot autofocus. The 5-axis stabilization cancels the camera shake and provides really stable output. If you are looking for a camera that has a sleek design and utmost performance, then this is the best choice in the market to make. The maximum shutter speed is about 1/4000 which is quite extraordinary at this price point. This enables the user to have wider aperture settings in bright conditions.

The 4K video recording at 24 frames per second is due to the sensor and the processor both. The camera goes exceptionally well in Full HD and HD video recording as it can capture 60 frames per second for 1080p video and 120 frames per second for a 720p video. Many cameras nowadays have a continuous shooting mechanism that allows them to capture a limited time period in slow motion with extraordinary capability. In Canon EOS M50’s case, 10 frames are recorded for continuous shooting. The dual pixel CMOS Autofocus allows fast focusing just like a camcorder. The camera is rated best for shooting and tracking the objects that are moving at a fast rate like cars and airplanes. 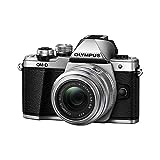 It features a high resolution with 16 megapixels lives MOS sensors. The top sensitivity of the camera goes up to ISO 25600. There is also an electronic viewfinder and a 3 inches tilting screen present which can capture and display the captured images. Besides the great classical look an exceptional appeal of the camera, the main asset lies in the versatility of performance that other cameras lack. The camera has been remarkably suited for long exposure photography because of the Live Bulb and Live Time modes. 12-bit RAW images can be captured in a single burst with the total number of images being 22. A total of 36 JPEG images can be captured too in a similar model.

The 179 phase-detection point with 25 contrast detection delivers an accurate yet fast focusing capability. Continuous shooting mode captures 6 frames per second with the sensitivity of ISO 25600. The camera provides the convenience of capturing the everyday shooting. The 180 degrees tilting screen allows the user to capture selfies and touch focus. 5 types of focus mechanisms are available in this camera. One is single-shot AF, another one is Automatic AF, the third one is continuous AF, fourth is a direct manual focus and the last one is manual focus mode. The camera is noted worldwide because of this functionality.

It is a digital camera from Fujifilm that comes with a 24 Megapixels CMOS sensor that features a fast lens and high sensitivity of ISO. The camera features some exceptional qualities like its size which can easily fit into the pocket. The depth and field control goes beyond another camera as it excels in low light situations because of the high ISO which can reach 51200. The camera also provides an option to record 4K Ultra HD video at about 15 frames per second. A majority of the buyer’s population prefer buying this camera because of the filters and simulations. Bluetooth connectivity provides old-school wireless communication by pairing it with a smart device.

Canon EOS M10 is a replacement for Canon EOS M2. The former provides 18 megapixels CMOS sensor with a 3 inches tilting LCD screen. The Wi-Fi and NFC are present for wireless connectivity just like any other modern tech camera. Canon’s mirrorless camera has been highly praised by the public. The 1080p video recording comes with 30 frames per second. The viewfinder is absent but an extension in ISO is observed. The ISO can go to a maximum of 25600. That makes low light movie capturing exceptionally easy. The camera has been praised very well by the selfie lovers as it captures some stunning selfies. The self-portrait mode helps the user to catch the incredible looking selfies. With the Canon Camera Connect application installed on the camera, it could be easily connected to any smartphone or tablet in the designated range.

For photography, it features a 24.2 megapixels CMOS sensor that is enhanced by the precise autofocus system. The SR+ Auto settings are enough to deliver an accurate depiction of a variety of scenes. The camera goes exceptionally well for those traveling enthusiasts which find viewfinder at their ease. The 3 inches LCD screen can go best for beginners who are not well familiar with the working of the viewfinder. The lithium-ion battery offers about 450 shots per its full charge.

Talking about video recording, Canon EOS M6 can go up to 60 frames per second while recording at a resolution of 1080p. For dark scenarios, the ISO can go up to 25600. For low light capturing, the ISO can go as low as 100. The 5-axis image stabilization can provide shake-free recording just by minimizing the camera shake. The large 3 inches screen can display exceptional quality images and videos at the capturing instance. It also enables multi-angle recording just like any other expensive camera. NFC and Wi-Fi make it a wireless connector with smartphones or tablets.

Old school Bluetooth is also present for devices that don’t have the functionality of Wi-Fi and NFC. However, the camera is not a full–frame camera.

Choosing a mirrorless camera under $500 can be a complex task because of the pros and cons of every other camera. From video capturing to sensor size, everything matters before making the purchase. Here we will try to cover all of them. Buying a camera under $500 would be an exciting experience for you, once you’ve gone through each and every detail of this buying guide.

The interchangeable lens is the only thing that is different in compact cameras and mirrorless cameras. If one has never used a camera that has this functionality, then the user would be quite amazed by the fact that how it will change your photography skills. For a mirrorless camera that is under $500, you will be able to found a decent size lens like the 18mm to 55mm. Make sure it features at least this. Some cameras under $300 also keep this size of the lens.

Mirrorless cameras come with various sensor sizes. And many individuals are confused, which one to consider while buying a mirrorless camera that is under the range of $500. Mirrorless cameras have a sensor size that lies in the middle of DSLRs and point-and-shoot cameras. Under the range of $500, a 17.3 x 13 mm sensor is quite common and you would be finding it a lot in Panasonic and Olympus’s manufactured mirrorless cameras. Both of these manufacturers use the Micro Four Thirds standard. When buying a camera that has the mentioned sensor, you should keep in mind that Panasonic has stabilization in its lens and in-camera stabilization is utilized by Olympus.

Larger sensors perform better in lower light and produce less image noise in photos taken with higher ISO sensitivities. If low-light photography is important to you, you might want to consider one of the full-frame mirrorless cameras, or at least one with an APS-C sized sensor. If you are more concerned with a smaller camera size and don’t require the best in low-light performance, a Micro Four Thirds camera might be a good fit for you. This is not to say that cameras with smaller sensors are not suitable for low-light shooting, rather, it is one of the main benefits of larger sensor sizes.

EVF also consumes battery life. This is minimal, and usually not a huge concern, but just another thing to take into consideration. But if you wish to purchase a camera with a viewfinder, you should always go for that mirrorless camera that has longer battery life.

The wireless capabilities that have been included in many of the mirrorless cameras on the market are truly incredible. Most cameras with Wi-Fi also have a partner app for either iOS or Android that allows you to control the camera from a smartphone or tablet.

Number of shots in a single charge

Battery life matters a lot when shooting with a mirrorless camera. Before buying the camera, you should always keep track of the total battery life. For a camera under $500, you will be easily able to get about 400 to 500 shots in a single charge. So, buy one that features at least this number of shots.

Best Camera for YouTube in 2020 : Perfect Cameras for Getting...

Best Point and Shoot Camera Under $1000