In this review, I’ll be using both Blackmagic Studio Cameras for a live shot and talking to you about how to use the Blackmagic Web Presenter 4K to broadcast video from any camera to platforms like YouTube, Twitter, Facebook, and others. 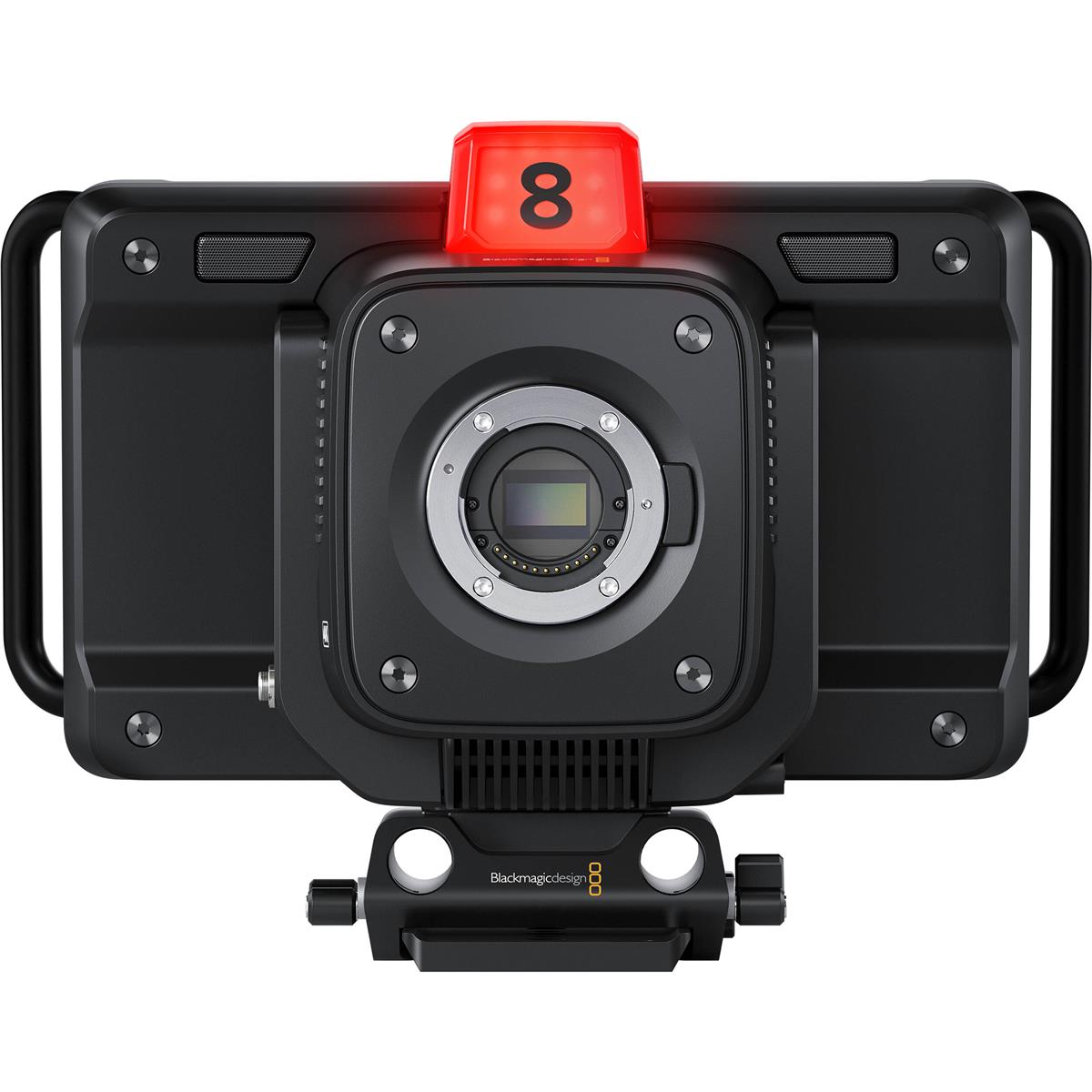 With the Blackmagic Studio Camera 4K Plus, you can use any lens that can be converted to the MFT mount on a lightweight camera body with a 7-inch 1920×1200 color screen and a micro 4/3 lens (not included). You can shoot in 1080p at frame rates ranging from 23.98 to 60, and you can use the same frame rates in 3840 by 2160 for Ultra High Definition, for a total of eight distinct frame rates in HD and eight different frame rates in UHD.

With Blackmagic Zoom Demand and Blackmagic Focus Demand, users may manage the zoom and focus of lenses on the Blackmagic Studio Camera 4K Plus, making it even more studio-friendly. For this evaluation, neither item was accessible, but it will be soon.

The micro 4/3 lens may be attached to the front of the Blackmagic Studio Camera 4K Plus. An HDMI Out port, a 12V input, two USB-C 3.1 A and B ports, a microphone input, and a headphone output are all located on the side of the device.

Foldable sunshades on the back shield the seven-inch LCD display from glare. The settings dial, which controls the active feature selected, the Back button, ends menu settings and brings back a live image to the LCD, the F1 button, which controls the focus zoom, the F2 button, initiates autofocus, and the F3 button, which activates auto iris, are all located on the left side of the LCD screen.

Of course, these function buttons can be changed. Lower than the function controls is the power switch. You may adjust the screen’s brightness, contrast, and peaking settings on the right side.

You can choose the characteristics you want to change from the LCD screen’s top menu. Touching the shutter speed, iris, timecode, gain, and white balance icons changes the settings for each of those elements while touching the frame rate symbol opens a slider to adjust the frame rate.

The slider bar below or the settings dial on the left can be used to alter any of these settings. A second menu with the record, monitor, audio, setup, presets, and LUTS appears when the last icon is touched. There isn’t a camera out there that is easier to operate.

The right side of the camera, when facing the front, features two 12V inputs, an HDMI output, a 12G-SDI output, an SDI input, and a 10GigE port (one being a 4-pin). The two USB-C 3.1 inputs, two XLR audio inputs, a five-pin intercom port, a connector for a microphone and headphone output are located at the top of the left side.

You can connect a camera to the Blackmagic Web Presenter 4K’s SDI input if your goal is to transmit live content. The entire process is handled by the 5.51×6.90-inch rack-mountable device.

We used the Blackmagic Studio Camera 4K Pro (equipped with an Olympus M.Zuiko Digital ED 60mm f2.8 Macro Lens) as a second camera during the audition to frame the medium close-up.

HDMI connections were used to connect the cameras to an ATEM Mini Pro live production switcher, and a 48-inch Samsung UHD monitor was used to see everything. A SanDisk Extreme Pro 2Tb SSD drive attached to the ATEM Mini Pro was used to save the 1920×1080 footage.

Although the cameras could shoot in UHD, I opted to shoot in 1080p due to its smaller file size. Less than 15 minutes were needed to complete the setup. Additionally, mounting the cameras on tripods rather than pedestals simplified the assembling procedure.

HDMI connections were used to connect the cameras to the ATEM Mini Pro live production switcher, and a 48-inch Samsung UHD monitor was used to observe everything.

The big touchscreen, red or green tally light that denoted a Program (Live) or Preview shot, and ease of usage of the cameras had the crew’s freshmen pupils in awe the whole evening. The actors would focus on the Live camera instead than the tally lights, which they preferred. A floor manager would previously indicate which camera was live.

Adjusting the iris was simple because some actors wore light-reflective white garments and others light-absorbing darker colors. The size of the team was reduced by allowing the operator to manage the shooting specifications without requiring an additional person in the control room to video shade. For the auditions, we used multiple cameras for the first time in ten years. The future will see a move toward this new two-camera method.

If we had wanted to use just one camera with our current switcher in the control room, the Roland Switcher and the Blackmagic Studio Camera 4K Pro with its SDI outputs worked flawlessly together.

The ATEM Mini Pro was a superior option since we preferred having the technical director actively involved in the TV studio action as opposed to isolating him in our control room. We used the HDMI outputs from both cameras because the ATEM Mini Pro only accepts HDMI inputs.

Using the Blackmagic Studio Cameras switching live also significantly reduced the amount of time it took to upload the content to the Internet; after removing the hard disk, all of the actor files were complete and prepared for viewing and uploading.

Three pedestal-mounted 3 CCD 1080i $65,000 cameras with a 4-inch B&W viewfinder are connected to our Roland Switcher via fiber optic cable in our studio.

It was never easy to tell which camera was live if the tally lights on top of each camera weren’t working. Three tripod-mounted Blackmagic Design cameras with 7-inch color viewfinders, the capacity to film in 4K, operator-controlled touch screens, and working tally lights could be added to our studio for about $6,000. Regardless of how awful your arithmetic is, $6,000 is a lot less than $195,000!

I linked an Ethernet cable to the Live Stream port on the Blackmagic Web Presenter 4K and connected our 48-inch Samsung UHD monitor with an HDMI cable.

The actual setup is quite user-friendly and has a straightforward menu. I selected Live Stream, 1080p 24 as the Stream Standard, Auto Mode as the Video Output, and YouTube as the Platform by pressing the Menu button.

I turned the dial to Setup, scrolled down to the Protocol, IP Address, etc., and selected Ethernet as my Connection Priority rather than Mobile.

I saw the Samsung monitor as the talent practiced her blog and noted that the image was good and the stated auto levels were accurate. (Credit for photo: Chuck Gloman)

I could see on the Samsung monitor whether I was On Air or Off. I observed the monitor as the performer practiced her blog and noted that the image was good and the reported auto levels were accurate. The Live Stream I was utilizing, the Video Input and its settings, the Data Rate in megabytes per second, and the Cache were all also shown.

Pressing the On Air button will instantly make the feed live. The moment you see the words “On Air” flash in red, you start moving. They took out their phones, just like students did, and viewed the YouTube feed—instant gratification!

A setup with numerous cameras and a switcher used to take a few hours to set up, including running cable, timing the switcher, setting up the monitors, and recording the finished product on tape. The outcome could not be streamed.

I did acquire useful engineering skills, though. The pupils quickly learned out the touchscreen without my assistance, just like they do with their phones.

Blackmagic Studio Camera 4K Plus: Features a seven-inch color touchscreen, sliders for all settings, green and red tally lights, support for Blackmagic RAW, a small connector audio input and headphone connection, HDMI output, HD or 4K capability, and the option to record to media via a USB-C port.

Blackmagic Studio Camera 4K Pro: Features a seven-inch color touchscreen, sliders on the touchscreen that can be used to adjust all settings, green and red tally lights, Blackmagic RAW support, a mini connector audio input, and headphone jack, HDMI output and SDI outputs, XLR audio inputs, HD or 4K capability, and the ability to record to media via a USB-C port.

SDI input, HDMI output, user-friendly menus and setup choices, and the ability to stream in HD or 4K are all features of the Blackmagic Web Presenter 4K.

In any size TV studio where one or more cameras are required, the Blackmagic Studio Camera 4K Plus may be used. Connects quickly and easily to Blackmagic’s ATEM Mini series of live production switchers via HDMI.

any size TV studio that requires the usage of one or more cameras may use this. Includes SDI capability, allowing users to connect it to switchers like the ATEM Constellation 8K, and has XLR audio ports. It is simple to connect through HDMI to Blackmagic’s ATEM Mini line of switchers.

Connect any SDI input to the Blackmagic Web Presenter 4K and stream live to a variety of Web sites using Ethernet or a mobile device.

The Studio Cameras or Web Presenter 4K may be operated quickly and easily by someone with almost no experience.