There are many different types and sizes of cameras suitable for studio and live event production work, but none is as distinctive as the Blackmagic Design Studio Camera 4K. 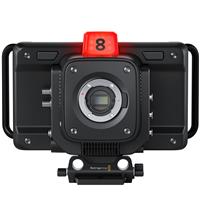 The camera is truly in a league of its own.

There are many different types and sizes of cameras suitable for studio and live event production work, but none is as distinctive as the Blackmagic Design Studio Camera 4K. The Studio Camera 4K Plus and Studio Camera 4K Pro are the two available models of this camera, with the pricing and I/O being the key distinctions between them.

They have the same distinctive physical factor as earlier studio cameras from Blackmagic Design, which means they resemble monitors with front-mounted lenses more than actual cameras. From the perspective of the end user, this appears to be a daring design decision at first, but it’s actually rather excellent. In a pelican case, the design is well suited for productions that require frequent setup and breakdown.

Other cameras can’t make that big of a claim if any. All the advanced functions, such as talkback, tally, camera control, and CCU color correction, that we have come to expect from studio-style cameras may be delivered to the camera via a single connection. The camera is truly in a league of its own.

The Studio Camera 4K Pro excels in the I/O department; it is furnished with two USB-C 3.1 Gen 1 ports, two XLR inputs, HDMI, SDI in/out, 10Gb/s Ethernet, a five-pin intercom connection, a 3.5mm microphone jack, and a 3.5mm intercom. It connects to just about anything.

One of the best features of this camera’s video outputs is that they don’t all have to have the same overlays, gridlines, status information, focus peaking, or even false color. They can all have distinct ones instead.

Beyond that, the numerous links may potentially represent distinct resolutions that are unrelated to one another. As a result, the HDMI may output 1080p with a LUT while the SDI outputs 2160p with false color, the LCD may display focus peaking and clean Blackmagic RAW 4K may be recorded directly to a hard drive via USB-C. A mind-boggling opportunity for application and workflow is created by all of these alternatives.

Three distinct power sources are available for the Studio Camera 4K Pro: a 12v DC adapter, a typical 12v four-pin XLR, and Power Over Ethernet (POE) when used in conjunction with the soon-to-be-available studio converter.

That connection carries power, tally, talkback, program return feeds, camera control, and video from the camera. Alternatively, you may use any of the larger ATEM switchers to control color correction, tally, and lens control through the inherent camera control protocol in the SDI connections. You can use HDMI from any other ATEM Mini in a similar manner.

The user interface of the seven-inch high brightness (2000 nits) LCD viewfinder is similar to that of other common studio viewfinders. Focus peaking, brightness, and contrast adjustments are on one side, and the program return feed and three programmable function buttons are on the other. The controls are the same as viewfinders in a whole other tax band.

Modern carbon fiber reinforced polycarbonate was used to construct the chassis, making it both light and sturdy. The viewfinder’s touch interface makes it quick and simple to delve deep into the menu selections, and the tally light is clearly visible.

Prior iterations of this Blackmagic Studio Camera were quite constrained since they lacked the necessary zoom and focus features. In a studio setting, you shouldn’t use any camera that makes you squirm around it and take your hands off the tripod handles. This model surpasses its predecessors in every way by adding that feature.

Sincerity is told, I struggled to identify problems with the Studio Camera 4K Pro. The sunshade on the back feels a little fragile is the first of the two drawbacks I could identify. However, despite being fragile, the sunshade folds away for storage and serves to shield the monitor screen when lowered.

The second is that there are just a few lenses that can meet both the zoom and focus requirements. One exception is the Panasonic Lumix G X Vario PZ 45-175mm f/4.0-5.6 Zoom, which is a medium zoom that typically ranges from 14mm to 52mm. I would like to see a few more possibilities beyond 175mm and a quicker fixed aperture, but these lenses also have variable apertures.

Since camera settings in churches typically are too far away for 40-50mm lenses to function, anything in the 70-200mm f/2.8 range would be preferred. A fast fixed aperture telephoto lens would easily cost over $1,000, but on the plus side, all of the lenses are fairly priced at under $400.

This camera is a wonderful steal with its MSRP of $1,795; even at its combined price of $2,200 for the camera and lens, it represents a fantastic deal. The overall price jumps to $3,580 when you include the zoom and focus requirements ($245 each) as well as the studio converter ($895), which is still less than I have previously spent on only lenses.

The Studio Camera 4K is a wonderful choice for churches wishing to enter the broadcast or IMAG markets due to its affordable price. When you consider that these cameras can be linked through SDI for a signal while utilizing HDMI to ATEM Mini for control only, even churches with massive production switchers can profit.