The Blackmagic Design URSA Mini Pro 4.6K G2’s general layout and functionality were covered in the first section of my evaluation. This time, I want to concentrate on my thoughts regarding its usefulness, picture quality, and much-hyped slow-motion features.

With a body weight of 5.07 lb (2.3 kg), the G2 is slightly heavier than the Sony FS7 and lighter than, for example, the Sony PXW-500 ENG camcorder. That’s quite a feat considering the solidity of the entire thing and the all-metal body structure.

As a result, the G2 is really fairly portable to use, with your choice of lens and battery determining a large portion of the final weight and balance. In relation to that, Blackmagic doesn’t list the camera’s power consumption. 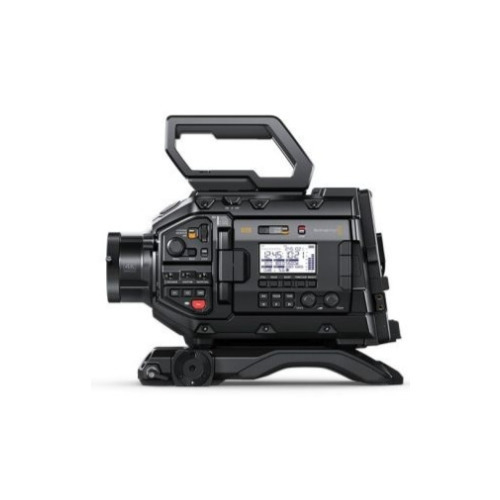 However, the Anton Bauer Cine 90 that came with it lasted for just over two hours, so it is probably drawing between 40 and 45W, which is a reasonable amount.

Officially, a Panasonic Varicam LT, which serves as a decent reference camera, draws 47W at a minimum. Yes, I am aware that on RedShark we don’t typically compare cameras, however, it’s useful to have a benchmark.

It balances fairly well while using the URSA G2 off the shoulder with the optional shoulder kit, with all parts properly set fore and aft. If I had to complain about anything, it would be that the shoulder pad could be much softer, especially if I intended to use it that way for lengthy periods of time.

It also balances well when used on a tripod. In this setup, the two main record buttons are either directly in front of the large LCD or next to it when the screen is folded in.

The forward record button has two raised lines for a tactile sensation, but in my opinion, it is too close to the other buttons. It should be situated on the bottom front of the body and be much larger, like the white balance switch on ENG cameras, in my opinion.

It would also be handy and helpful if the camera had an additional button on the top.

But they are only minor complaints. The Ursa Mini Pro G2 is a device I had a great time using from a user perspective.

One of the G2’s key selling points is slow motion, and it immediately caught my attention. The camera can shoot in HD at up to 300 frames per second. This is windowing the sensor, yet oddly, when it is chosen in the configuration options, it doesn’t show up as “windowed.” However, there is a minor price to pay for such a high frame rate that may be captured in BRAW.

Aside from that, I find myself wondering whether Blackmagic could develop a mode like this for the BMPCC 4K to enable marginally greater frame rates than 60P in 4K.

By depressing a button on the side of the camera, you can activate HFR mode. A slider on the touch screen allows users to choose the exact frame rate, with modifications possible in 1fps steps. Obviously, there is less light in every frame the faster the speed. You will require a lot more light than 120 at 300 frames per second.

With the 300 frames per second available, it was possible to barely make out the movement of a flying insect’s wings.

I took a risk and chose to capture flying insects in macro to explore some of its capabilities. I used a lens reverser and a 50mm Pentax Super Takumar f/1.7 lens.

Because I would need to increase the aperture to roughly f/11 or so in order to have a chance of deepening the focus, this test would push the camera to some of its limitations.

By doing this, you further limit the light that reaches the sensor you already have by filming at a fast frame rate. As a result, I had to set the camera’s maximum ISO setting of 3200 even in clear daylight. It’s standard procedure in macro.

Such images require tripod mounting, which adds to the task’s already masochistic nature. I then carried them handed. Moving the camera a few millimeters takes care of the focus with a reversed lens.

I did say it was masochistic, after all. The resulting images were far from flawless, but they were still very exciting to create and allowed you to watch the movement of the insect’s wings.

Although this particular shot actually went beyond what the G2’s frame rate could handle, it nevertheless demonstrates the range of potential creative possibilities.

Additionally, I put it to the test alongside some kayakers on the Severn River’s minor rapids (thanks to the Telford club members who allowed me to film them). Most of these photos were captured in 2.40:1 mode at 150 frames per second since they were much easier to handle. The movements they make are really clear to see.

The following remarks are my personal opinions because we don’t perform dynamic range tests on RedShark, as we’ve already explained. All of the videos were captured in BRAW 8:1.

Amazingly, unless you truly require the greatest, both 8:1 and 12:1 are excellent choices for the majority of jobs. However, in order for your storage to have any hope of keeping up with the G2’s top frame rates, you will need to reduce the aspect ratio to at least 8:1.

I used Resolve 16 to apply the Extended Video V4 LUT, making just minor exposure tweaks to an earlier node. I could have used different LUTs or started from scratch to grade the film, but I wanted you to see the BRAW footage as it is straight out of the camera with the most recent V4 LUT.

When compared to the BMPCC 4K, the G2 closely matches it in terms of color. The G2 has a somewhat “deeper” color right out of the camera when both are set to record ProRes Extended Video.

But you have to pay close attention. Additionally, the G2 has a somewhat wider dynamic range, which is expected. Yet again, close inspection is required. Therefore, the two cameras get along famously.

The G2’s maximum ISO setting is ISO3200 since it lacks the dual native ISO of the BMPCC 4K. As you could assume, the picture grows noisier after you reach ISO 1600, but not to an unusable extent.

Although I haven’t altered the film below, Resolve’s noise reduction feature makes it quite simple to remove. On these tests, including several of the darker, underexposed images I didn’t include, I did not detect any FPN.

Red clipping has been brought up in the comments. I didn’t notice any problems like these with the URSA Mini Pro series (for example on the poppies or bright red kayak).

It is excellent to know that you can utilize these high frame rates and still get a high-resolution video with little to no artifacts because the resulting 1080p video, even if it is windowed, doesn’t seem to display any aliasing or resolution issues at 300fps.

From the brief time I spent with it, it appears you can protect the highlights during initial exposure but be assured that you will have a lot of flexibility to draw back the dark areas. Playing around with exposure in Resolve, I could see that the G2 reaches fairly deeply into the shadows.

Last but not least, the rolling shutter was excellent. The screenshot below was captured during the very rapid back-and-forth panning at 25p, and as you can see, the amount of skew on the telegraph pole is really small.

For me, the URSA Mini Pro 4.6K G2 checks a lot of boxes as a camera. It’s no secret that I appreciate BMD’s use of color science, and the G2 has just served to confirm my opinion. It creates amazing-looking colors right out of the box. Similar to the BMPCC4K, although not to the same extent, it can be inclined toward the “warm” side of things. However, the image is highly appealing to the eye.

The G2’s capabilities are most closely matched by a camera that costs roughly $10,000. For $5995, the G2 offers better frame rates, in-camera raw recording, a substantially higher peak resolution, and more. It’s hard for me to come up with anything I don’t truly enjoy about it, with the possible exception of my wish for dual native ISO functionality.

The G2 is a camera that can handle any project you throw at it and is reasonably priced so that even production companies with modest budgets can get one.

In fact, I believe it would be crazy not to think about the G2 if you’re looking for a camera that enables you to capture anything from events to corporate and industrial, as well as cinematic drama and sports.