The Canon T6 is a simple-to-use camera that covers all of the fundamentals for beginning photographers. It doesn’t offer a slew of features that would be overwhelming to new users.

With a quicker CPU than Canon’s previous entry-level camera, the T5, the T6 is a more capable camera. The Canon T6’s smart positioning of controls, as well as its relatively lightweight design, are significant advantages. This camera is a simple-to-use entry-level DSLR that may help you move up from point-and-shoot cameras and smartphones to a higher quality of photography.

The Canon T6 is an excellent entry-level DSLR camera for those new to the world of digital photography. With its wonderful combination of wireless connection and intuitive design, this camera is the epitome of fundamental excellence all in one package. A novice will find the camera to be ideal if you are upgrading from a simple point-and-shoot camera. Despite the fact that the T6 is an entry-level camera geared at enthusiasts rather than professionals, it produces images of exceptional quality that can compete with more advanced models.

With an 18-megapixel sensor, the Canon T6 falls below comparable entry-level cameras in terms of image quality. Cameras with a sensor resolution of 20 MP or above are the norm for entry-level models. However, megapixels aren’t everything, and the camera captures some quite stunning images with them (especially considering its price point.) The 485g camera is lightweight and comfortable to carry, making it an excellent travel companion for photography and urban exploration. In the majority of situations, the T6 is shipped with a kit lens, which is great for a starting photographer.

When shooting in 1080p, the Canon T6 offers good photos and video quality; but, it does not have the newest 4K video recording capabilities. Its 9-point autofocus mechanism is very excellent for tracking moving objects in low-light conditions. Even when shooting at the highest ISO settings allowed, it’s very hard to avoid noise while shooting long exposures with the T6. This is particularly visible in night photography or in sky photography taken at higher ISO settings, for example. Improve image quality by reducing your ISO and lengthening your exposure time, or by cleaning it up in post-processing.

Because of the DIGIC 4+ processor, which is both better and quicker than its predecessor, the battery life is even greater than before. T6 has adequate battery life to last up to 500 single freeze frame photos, which is more than enough to endure a whole day of shooting outside.

Despite the fact that the T6 is a camera aimed at novices, it makes no concessions in terms of image quality, battery life, or processing speed in any way. When used in conjunction with Canon’s software, it is possible to fine-tune images while still in the camera.

The design of the T6 does not in any way depart from the standard pattern for entry-level SLR cameras. It measures 4.0 inches in height, 5.1 inches in width, and 3.1 inches in depth (HWD), and it weighs 1.1 pounds without a lens attached. The body is black, and the outside is made of plastic.

There is only a little handgrip, but it is covered in a rough material so that the user may have a more secure grip on the body. The D3400, which can be purchased for $499.00 from Dell Technologies (Opens in a new window), has dimensions of 3.9 by 4.9 by 3.0 inches and weighs 13.9 ounces less than its predecessor.

Wi-Fi connectivity is already incorporated. The T6 is compatible with the Canon camera connect app, which is available as a free download for iOS and Android devices. With this app, you may transfer photographs to your smartphone in order to share them on social media.

You can connect via near-field communication (NFC) if your device allows it; alternatively, you can connect using a password if you are using an iPhone or another handset that does not support NFC. If you choose to connect using a password, the app will require you to access the menu in order to do so; however, it will guide you through the procedure.

It would have been nice to have a button or link that took you directly to the connection from the image playback interface, but you’ll just have to keep in mind that the option is buried deep within the menu system.

Excellent performance for an entry-level single-lens reflex camera, the T6 turns on, verifies focus, and records an image in approximately 0.4 seconds. Additionally, in high light, its 9-point autofocus mechanism locks onto subjects and fires in roughly 0.13 seconds, making it neither the quickest nor the slowest of its kind.

While the majority of APS-C SLRs, including as Canon’s most recent midrange T7i ($699.96 at Amazon)(Opens in a new window) model, have upgraded to image sensors with 24 megapixels, the T6 continues to employ an imager with only 18 megapixels. It is an old sensor, very much like the one that can be found in Canon models dating all the way back to the T2i from the year 2010.

I used Imatest to analyze the amount of noise in the photographs that I took. When taking JPGs with the T6’s default settings, the camera maintains a noise level of less than 1.5 percent up to ISO 3200. Even at low to moderate ISO settings, image detail is significantly reduced because of the intensive noise reduction that is taking place behind the scenes.

Fine lines begin to get significantly smudged at just ISO 800, and they become extremely fuzzy at ISO 3200 and the highest possible ISO sensitivity of 6400. You have the option to use ISO 12800 as an extended setting, but we do not recommend doing so. This setting is disabled by default, and you will need to navigate the menu in order to turn it on.

Overall, the Canon T6 is an excellent travel companion for anybody looking for a small, lightweight camera for traveling, exploring, or taking personal photographs on the road or at home. Its rapid speed, along with its excellent image quality, may result in some very stunning photographs. It unquestionably falls somewhere in the middle of the entry-level DSLR camera spectrum. The wireless features of this camera allow you to easily and rapidly upload RAW and processed photographs to your smartphone or laptop for further editing and fine-tuning. 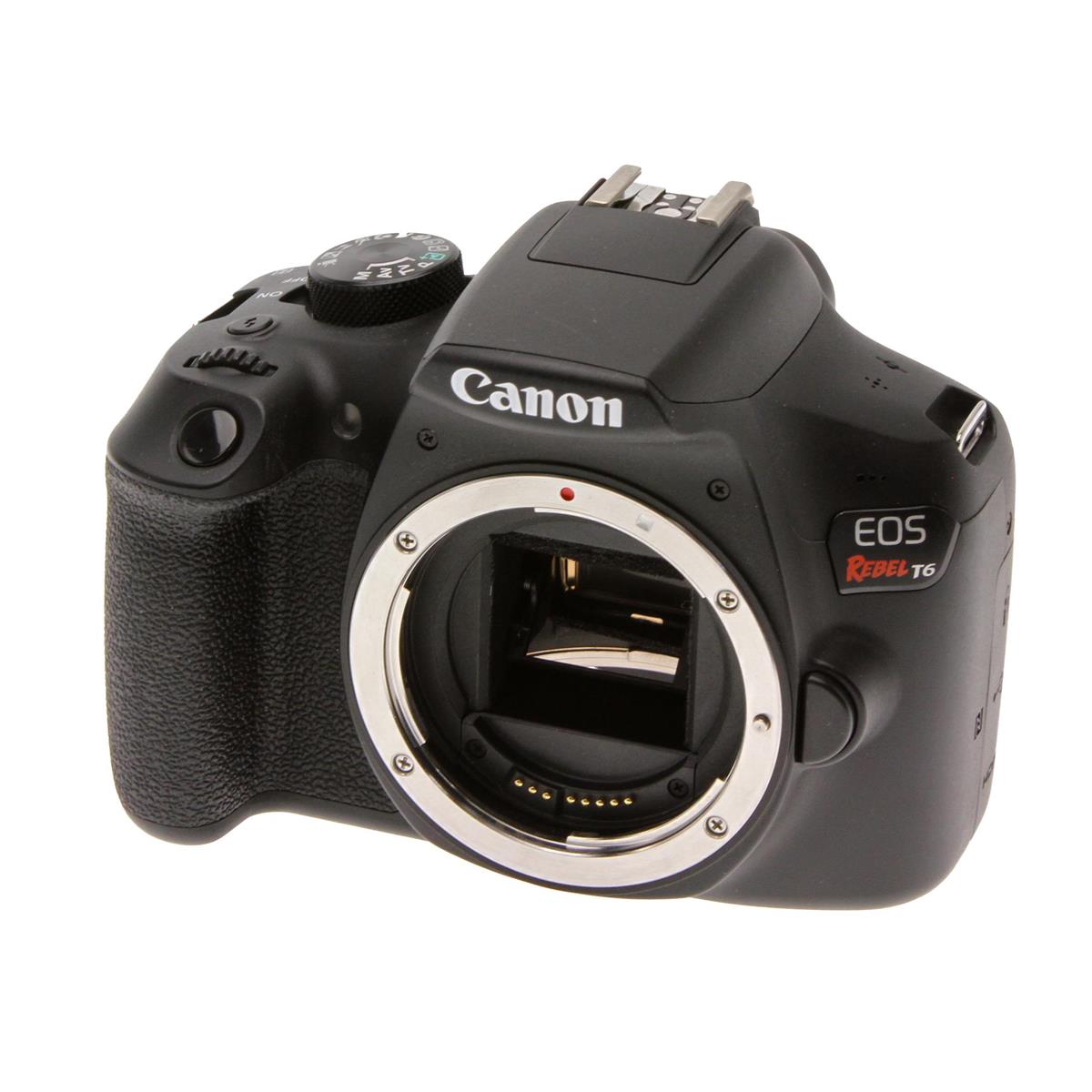 Load more
The Canon T6 is a simple-to-use camera that covers all of the fundamentals for beginning photographers. It doesn't offer a slew of features that would be overwhelming to new users. With a quicker CPU than Canon's previous entry-level camera, the T5, the T6 is a...Canon EOS Rebel T6 Review