Despite the fact that it was first introduced in February 2017, the Canon EOS Rebel T7i (also known as the EOS 800D outside of the United States) continues to rank at the top of the company’s entry-level DSLR lineup.

Featuring a comprehensive feature set housed in a compact and portable design, the Canon EOS Rebel T7i DSLR provides excellent photographic capabilities as well as a handy variety of settings and connectivity options. 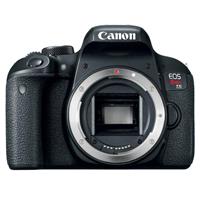 Canon’s Rebel T7i digital SLR camera features a 24.2MP APS-C CMOS sensor and a DIGIC 7 image processor, allowing it to produce high-resolution stills and video in a wider ISO 100-51200 range to accommodate shooting in a variety of lighting settings. Working with moving subjects is made easier with the sensor and processor combination’s 6 frames per second continuous shooting capability.

Additionally, in addition to the imaging characteristics, the sensor’s architecture allows for Dual Pixel CMOS Autofocus, which employs phase-detection autofocus to provide rapid, accurate, and smooth focusing performance while recording movies or taking stills in live view. For still photography with the optical viewfinder, a 45-point cross-type phase-detection technology is employed to achieve rapid and precise focusing in a range of shooting situations.

Essentially a re-imagined version of the classic EOS Rebel T6i / EOS 750D from 2015, it brings together all of the traditional characteristics of a Canon DSLR (excellent handling and image quality) with some impressive technical specifications, such as a 6fps burst mode and a 3-inch vari-angle touchscreen.

In terms of shooting performance, it has since been surpassed by the Canon EOS M50, which is the mirrorless version of the camera. That camera, on the other hand, has its own limitations, including a battery life of just 235 shots, which pales in contrast to this camera’s 600 shots from a single charge.

While the EOS Rebel T7i / EOS 800D has the same 24.2MP resolution as the Rebel T6i / EOS 750D it replaced, the sensor has been completely redesigned and now employs the same technology as the EOS 80D.

It’s unclear what precisely changed, and Canon declined to disclose, but we may surmise that it makes use of the same onboard digital-to-analog conversion technology that we saw in the EOS 5D Mark IV in order to cope with noise more effectively.

The new sensor is paired with a Digic 7 image processor, which is a first for the company. This technology has subsequently been replaced by the Digic 8 chip, which we first saw in action on the Canon EOS M50, but it continues to be a strong performer, allowing the EOS Rebel T7i / EOS 800D to give better high-ISO noise performance and autofocus than Digic 6 cameras such as its predecessor.

In terms of sensitivity, the Rebel T7i / 800D has a range of ISO100-25,600, which is an extra stop higher than the T6i’s expanded 12,800 ISO ceiling, with a Hi setting equivalent to ISO51,200 also available. We’ll get into the autofocus system in more detail later, but for now, let’s look at the ISO range. All you’ll have to do is pick this option in the custom settings.

This year, Canon has chosen to keep the same 3.0-inch vari-angle touchscreen display with a resolution of 1,040,000 dots that it used in the previous model. A minor increase in resolution or an increase in screen size to 3.2-inches (to match the Nikon D5600) would have been appreciated here, but it’s possible that Canon believed changes were unneeded because the touch interface is already one of the most refined on the market.

With 4K video capture now being a regular feature on cameras, particularly on mirrorless competitors, it’s a bit disappointing to see just Full HD video recording provided on this model.

Video can be taken at up to 60 frames per second, which is an improvement over the T6i / 750D’s 30 frames per second. Additionally, Canon has fitted the Rebel T7i / 800D with a 5-axis image stabilization system for filming hand-held footage. The technology, which is meant to operate with video but not still images, is intended to counter unintentional camera movement, and IS-equipped lenses will also function in concert with it.

Another notable absence from this camera is an audio monitor port, which is usually seen on cameras in this price range. There is also a 3.5mm stereo microphone connection, but no headphone port to listen to the audio.

The T7i is similar in design to the Rebel T6i, with an aluminum alloy and polycarbonate body. However, Canon has managed to reduce the weight of the camera by around 20g, making it weigh 532g when equipped with a battery and SD card.

However, while we have no doubt that the quality of the construction of this camera is excellent, the largely matt plastic exterior finish of the camera does not feel very pleasant to the touch, as a result of the matte surface. If we’re being harsh, it appears to be a bargain, especially when compared to contemporary mirrorless competitors such as the Panasonic Lumix G90/G95 and Fujifilm X-T30, which are also excellent cameras.

While it won’t compete with most mirrorless rivals in terms of size, the T7i / 800D is still a very small body, and the textured hand grip is pleasingly deep, allowing you to maintain a strong grip on the camera even while shooting handheld.

Aside from that, the design is nearly identical to the T6i / 750D, with the same control arrangement as the previous model. This is not always a negative thing, since the T6i / 750D is a pleasant camera to operate.

Canon has been able to increase the continuous shooting speed of the T7i to 6 frames per second, in part because of the Digic 7 image processor.

Though just a little improvement, with mirrorless competitors, now providing quicker burst shooting, Canon should have been tempted to attempt to squeeze even more performance out of the new camera.

The T7i / 800D’s battery life, on the other hand, has significantly improved, and many mirrorless competitors would struggle to match its 600-shot capacity.

With one caveat: if you shoot only with the back display, the battery life drops to 270 photos, putting it below its closest competitor, the Nikon D5600, which can take a further 220 shots (820 total) before needing to be recharged.

Getting to grips with creative photography may be intimidating for new users, which is where the graphical Guide Mode on cameras such as the Nikon D3500 has done really well in the past. It’s thus encouraging to see Canon release something similar on the T7i / 800D in the future.

With the introduction of a simple-to-use graphical user interface, Canon hopes to assist customers by explaining settings and providing advice on the consequences each option will have on the final photo.

For example, if you’re shooting in Aperture Priority mode, the display will show you which settings are required for a blurred or sharp backdrop, as well as extra information to help you understand what’s going on.

This will undoubtedly be of use to beginning users, although more experienced users may disable this option in the menu if they choose to continue with Canon’s more traditional menu structure instead.

The new 24MP APS-C CMOS sensor in the EOS Rebel T7i / EOS 800D produces excellent results. While there isn’t much of a difference between this new sensor and the one used in the T6i / 750D in terms of out-and-out resolution, with both cameras functioning well, it is the enhancements made in other areas that distinguish this new sensor.

The way this camera dealt with noise was maybe the most significant improvement over the previous model. Images seemed quite clear and saturated at low sensitivities, but it is only as the sensitivity range is increased that significant gains become apparent.

Raw files processed with Adobe Camera Raw appeared to be of high quality, with photos seeming to be exceptionally clean even at ISO 6400.

Despite the presence of some luminance (grain-like) noise, the structure of this noise is extremely fine, and there is little discernible chroma (color) noise to be seen here. Saturation, on the other hand, has taken a slight hit, but it is still extremely good.

As you might anticipate, image noise becomes considerably more obvious at ISO 25,600, with saturation and detail deteriorating as a result of the increased amount of visible noise.

Despite this, the results are still rather good when all aspects are taken into consideration. We’d recommend avoiding this option whenever feasible, although it can allow a little amount of versatility if you’re in a pinch and need to capture an image in low light.

There’s no denying that the Canon EOS Rebel T7i / 800D feels a little out of date when compared to some of the most recent mirrorless cameras on the market. Having said that, it is currently a decent value for money and continues to be a viable alternative for novices or smartphone upgraders who prefer the advantages of DSLRs, such as greater handling and battery life.

The sensor continues to amaze, with excellent performance at high ISOs and producing photos that are rich in detail (though to get the most out of the camera, you’ll need some good glass).

Furthermore, the graphical user interface will make the camera even more appealing to first-time users; when paired with the logical control structure and the polished touchscreen, it results in a hassle-free shooting experience for all users.

Load more
Despite the fact that it was first introduced in February 2017, the Canon EOS Rebel T7i (also known as the EOS 800D outside of the United States) continues to rank at the top of the company's entry-level DSLR lineup. Featuring a comprehensive feature set housed...Canon EOS Rebel T7i Review