This 10.1-megapixel digital point-and-shoot camera from Canon has an impressive 12x zoom, which is the equivalent of a 28-336-millimeter telephoto zoom lens on a 35-millimeter camera.

With numerous forms of image stabilization, which is also employed during 720p HD video recording, and hundreds of useful shooting settings, the camera is an excellent all-around performer.

The ELPH 520 HS is equipped with a 10.1-megapixel picture sensor that can shoot photographs with a maximum resolution of 3648 x 2736 pixels and movies in 720p. This provides you with the opportunity to expand or crop a piece of your photograph for printing or publishing on the internet, among other things. 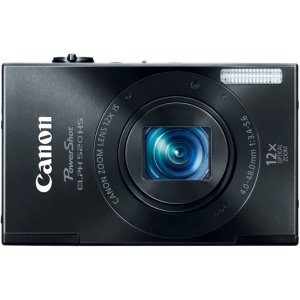 In low light, with the camera shaking, or when shooting a fast-moving subject, the Intelligent IS image stabilization technology guarantees that photographs and videos are as clear as possible and are not blurred by the camera.

It will assess the scene and the subjects included within it in order to decide the most appropriate stabilization approach to use for every particular situation.

View your photographs on the 3.0″ PureColor LCD display, which may assist you in composing your shots before you shoot and reviewing them afterward – even in direct sunshine. You may also notice that the photographs you take have better color representation and a more accurate portrayal of the scene.

With innovative features such as Smart Shutter, Face ID, and Tracking AF, it will be simpler to snap the photographs you desire without having to touch a button on your phone or camera.

Smart Shutter allows you to take images just by strolling within the camera’s field of vision – the camera will take a shot as soon as it detects your face.

Simply use the Face Detection function to identify and register your face, as well as the faces of up to 12 other people. The Tracking AF option, which tracks your chosen target and keeps them in focus no matter where they move inside the frame, may also be used for more precise shots.

Why would manufacturers continue to produce low-cost super zoom cameras when the majority of the demand in the current market appears to be for more expensive products? Are they hoping to lure consumers who are knowledgeable with their finances away from their smartphones? It would appear to be the case with the release of two new models in the Canon PowerShot lineup: the 16-megapixel SX520 HS, which is currently being reviewed on this site and is available for purchase at a suggested price of £299; the SX400 IS, which is scheduled to follow on later and will be an Argos exclusive model in the UK; and so on.

The PowerShot SX520 HS has a 16-megapixel back-illuminated CMOS sensor and a Digic 4 CPU; this is why the name of the camera indicates that it has ‘High Sensitivity.’ In contrast, the Canon SX400 IS has a 16-megapixel charge-coupled device (CCD) sensor.

Both cameras are equipped with optical image stabilization, which is something we would anticipate given the comprehensive lens ranges available in both models.

The molded, rubberized grip on the SX520 HS certainly feels comfortable when the camera is held in the palm of your hand, supporting Canon’s assertion that this iteration of the handgrips has been engineered to be more ergonomic and comparable to those found on DSLRs. Additionally, and this is somewhat unique for a bridge camera in this price range, the power source is a rechargeable lithium-ion battery, as opposed to a handful of conventional AA batteries.

When you take up the SX520 HS, you’ll notice that despite being a bridge/super zoom/all-in-one device, it feels surprisingly lightweight. Even with the memory card and batteries installed, the device may claim to weigh 441 grams, but in our experience, it is noticeably lighter than that.

This is a camera that, for obvious reasons, you’ll want to grab with both hands in order to produce blur-free images when shooting in daylight. If you do so, you’ll be able to attempt shots toward the telephoto end of the available zoom range.

Even though the majority of the lens can be retracted back into its housing when it is not in use, the optics here obviously dominate proceedings, meaning that this is still a bulky-ish camera. However, it does take up less space than a DSLR proper would with an eye-level viewfinder, which is a feature that this bridge camera does not have.

The back panel, which has a resolution of 461k dots and measures 3 inches, is similarly fixed. This means that there is no way to tilt or swivel the screen in order to obtain more creative framing angles. While this could have been a desirable feature, considering the low-ish price, it is not a deal breaker.

If you are interested in street photography, the telephoto setting makes it simple to capture candid close-ups of individuals who are unaware that they are being photographed, while the widest angle option, 24 millimeters, still enables us to fit a lot into the frame.

The all-encompassing nature of the lens reach also makes this one an ideal camera for visitors, as it enables us to frame our shots in a variety of ways without requiring us to go either forward or backward in our position.

The SuperFine JPEG setting at 16 megapixels was used to capture each of the sample photographs included in this review. This setting results in an image that is around 6 megabytes in size on average.

Even without selecting any of the “Super Vivid” color options, when there is a lot of available sunshine, the colors that are captured by the Canon PowerShot SX520 HS absolutely “pop,” particularly the blues and greens that are captured in landscape photographs.

There is also sufficient detail in the highlights and shadows to satisfy, and despite the fact that we could always use more detail still, we are talking about a camera with a small-ish, typical 1/2.3-inch sensor here. This means that there is enough detail in the highlights and shadows to satisfy. Because of this, the manufacturer of the camera has decided that the highest ISO setting that can be selected is just 3200, which may sound like a little number but is actually quite high.

There is also the possibility of selecting the fully automatic low light mode; however, doing so causes the resolution to decrease to four megapixels and produces some pretty unsettling effects when used in almost complete darkness, so it is recommended that this mode be avoided whenever possible.

Sticking at ISO800 – or ISO1600 if you have to – is still the best way to avoid grain and image noise. The maximum ISO3200 level, while not dreadful and potentially more forgiving if you want to turn the result into a black-and-white image, is only really worth accessing in the event of an emergency.

A maximum lens aperture of f/3.4 may not be something to write home about, and it progresses to a so-so f/8 while shooting at infinity telephoto, but at this price, it’s a case of horses for courses.

The results and level of detail, on the other hand, are surprisingly good for a camera that costs less than $300. In addition, all of this needs to be examined within the framework of a zoom reach that gives us a significant amount of leeway in terms of how we frame still photographs and movies.

Even though the SX520 HS will never be able to take the place of a DSLR or a CSC, it may still be a good choice for a family that is looking for an affordable all-in-one alternative.

Putting a large 42x optical zoom into a compact body with a small-ish sensor is never going to make for the best of bedfellows if the ultimate in image quality is your aim. However, we’d argue that the 16-megapixel Canon PowerShot SX520 HS is more about convenience, flexibility, and value for money all of which it largely delivers. It also has a lot of room for improvement in terms of image quality.

Load more
This 10.1-megapixel digital point-and-shoot camera from Canon has an impressive 12x zoom, which is the equivalent of a 28-336-millimeter telephoto zoom lens on a 35-millimeter camera. With numerous forms of image stabilization, which is also employed during 720p HD video recording, and hundreds of...Canon PowerShot 520 HS Review