It is equipped with a 5x optical zoom lens with a focal length equivalent to a 28-140mm focal length in the 35mm format. This is a flexible autofocus lens that can be used for everything from broad angles to telephoto photography.

The greatest aperture available at the wide-angle end of this lens is f/2.8, which will allow for crisp pictures even in low light. 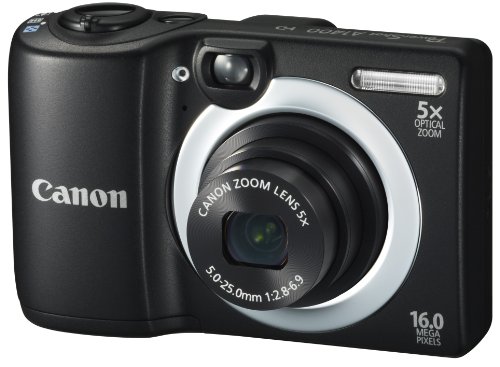 Aside from that, the ISO sensitivity is up to 6400, and the camera has digital image stabilization, which minimizes the influence of camera shake and aids in the production of clean photographs in low light conditions.

With a dedicated movie button, 720p HD video is easy to access and is always ready to be played when you need it. Along with 720p video at 25 frames per second, the A1400 can shoot 640×480 VGA video at 30 frames per second, which is a significant improvement.

It has an optical viewfinder for creating photographs as well as a 2.7-inch LCD screen for composing images and seeing them after they have been captured.

The new ECO mode helps you save money on batteries by darkening the LCD when it’s not in use. There is a Smart AUTO mode that allows the camera to handle all settings depending on 32 predetermined shooting conditions, and Scene Modes such as the Fisheye Effect and Toy Camera Effect provide additional creative possibilities. The A1400 is powered by four readily available AA batteries.

The A1400 is slightly more cumbersome than other compacts, although the difference is not significant. It weighs 6.1 ounces and has dimensions of 2.4 inches by 3.7 inches by 1.2 inches (HWD). The Samsung DV150F is more compact with dimensions of 2.2 by 3.7 by 0.8 inches, whereas the PowerShot has a greater depth because it uses AA batteries as its power source. The focal length range of the 5x zoom lens is 28-140mm at f/2.8-6.9 (in terms of 35mm equivalent).

When zoomed all the way into stronger light, the f/2.8 aperture on the wide end only collects a small amount of usable light because the aperture gradually decreases as you zoom in. This limits the utility of the wide end of the zoom range. The absence of optical image stabilization, which is a function that can be found in more costly cameras that compensates for movement when taking photos without the use of a tripod, makes this problem even worse.

The camera’s optical viewfinder zooms in and out in tandem with the lens, but the image it displays is only a rough estimate of what the camera will actually record. Because the lens takes in somewhat more information than what is displayed in the viewfinder, you should anticipate having to crop the photographs slightly in order to get them to look like what you are seeing.

Due to the optical property of parallax, you will see a region that is to the top and right of the real image frame while looking through the viewfinder of the camera when taking close-up macro shots, so you should avoid utilizing the optical finder for these kinds of shots. The display on the back LCD measures 2.7 inches, which is less than the 3 inches that can be found on the Olympus VR-340.

It has a resolution of 230k dots, which is not as clear as the displays seen on more costly cameras, which can have 460k or 920k dots respectively. There is an option in the menu to make it even brighter than the default setting, which is already quite luminous. When the sun is shining so brightly that even the best LCD screens are difficult to see, the optical viewfinder is there to make it possible for you to take pictures, even in these conditions.

Because the camera is pre-configured to operate in the Auto mode, which takes care of the majority of settings, the only two flash options available to you in this mode are “no flash” and “automatic flash.”

When Auto mode is disabled, you gain access to the camera’s Program mode and the ability to choose from a wide variety of pre-configured Scene modes. There is no option to use the manual, shutter priority, or aperture priority modes, which are typically more appealing to more experienced photographers.

Click the “Help” button if you aren’t familiar with much photographic jargon or if you discover that your photographs aren’t turning out the way you’d like them to. The button is shaped like a large question mark, so it is impossible to miss. It opens an online guide that not only explains the many functionalities of the camera but also offers advice on how to take better pictures.

Program mode does provide you with some degree of control when you have reached a more advanced skill level. You have the ability to make changes to the Metering pattern, ISO, White Balance, Exposure Compensation, Focus Range, and Drive Mode when you are in this mode. The Function button is used to bring up an overlay software menu, which is how each of these features may be accessed.

Other control buttons give you the ability to adjust the flash, begin recording video, change what is displayed on the back LCD, and activate Canon’s new Eco mode, which is a function that promises to enhance power management and extend the battery’s life.

The fact that the A1400 operates on AA batteries is either a strong advantage or a weak point, depending on how you look at it. If you just use your camera sometimes, you probably won’t mind spending money on a new set of alkaline cells every so often. However, if you use your camera more frequently, you may want to consider using rechargeable batteries instead.

It is almost certain that you will be able to purchase AA batteries almost any place, which means that you will not be prevented from shooting photographs even if you forgot to charge a battery or if you are located a significant distance from a power outlet. (You should only make sure that you bring along a few additional sets!)

The A1400 is not a very quick camera, but its performance is not significantly worse than that of other cameras in the same price range. It takes 2.1 seconds to start up and take a picture, has a shutter lag of 0.2 seconds, which is quite acceptable and can take a picture once every 1.4 seconds when set to continuous drive mode.

The comparable Canon PowerShot A2600 takes a picture every 1.4 seconds, starts up and shoots in 1.7 seconds, records a shutter lag of 0.3 seconds, and is faster to start up and shoot than its competitor.

Imatest was the tool I used to evaluate how crisp the photos captured by the A1400 were. The image has a score of 2,060 lines on the test, which means that it is sharper than the minimum requirement of 1,800 lines per picture height. This performance is even more amazing when compared to the 1,755 lines per picture height that the Samsung DV150F was able to achieve.

Imatest does a check for noise in images, which is a graininess that is not desired in photographs and can obscure detail. The A1400 utilizes a CCD image sensor, just like the majority of other inexpensive cameras; as a general rule, CCD sensors do not perform as well at higher ISO settings as more expensive CMOS sensors.

A CMOS model like our Editors’ Alternative superzoom Sony Cyber-shot HX30V is a better choice if you’re searching for a tiny camera that performs well in low light; however, it costs around four times as much as the A1400.

It should come as no surprise that the camera is only able to maintain noise levels below 1.5 percent at its most sensitive setting, ISO 100; increasing the sensitivity to ISO 200 results in noise levels of 1.6 percent. Photos taken at ISO 400 have an average graininess of 1.9 percent, but they still have a significant quantity of detail.

Because the image quality begins to degrade at an ISO setting of 800, you should avoid increasing the ISO setting to that level and instead make use of the flash. When we examined the Olympus VR-340, a budget camera with a long zoom lens and a CCD sensor, we found that it kept noise below 1.5 percent to ISO 800; nonetheless, the clarity was poor enough at that setting that we recommended keeping it at ISO 400 or below.

The video is captured in QuickTime format with a 720p25 quality setting. It should come as no surprise that 1080p recording is not an option because cameras that use CCD sensors are typically unable to capture video in that resolution.

The video has a grainy appearance, and the camera can only perform a digital zoom while it is recording footage. Memory cards of the SD, SDHC, and SDXC standards are all supported.

The Canon PowerShot A1400 is not the camera that we’ve found to have the most comprehensive set of features. Do not anticipate being able to snap images in low-light conditions without the assistance of the built-in flash on the inexpensive compact camera; it can compete favorably with other models when there is sufficient natural light.

It is compact enough to fit into the pocket of a shirt, it has an optical viewfinder that is adequate, and the shutter lag is quick enough that you won’t lose any shots because of it. Help mode is an excellent tool for casual photographers, and for slightly more than one hundred dollars, it is not difficult to justify making the investment.

If you are a professional photographer or simply have more money to spend, you should think about purchasing a higher-end camera with a longer zoom such as the Sony HX30V. On the other hand, if you are looking for a cheap camera that is suitable for beginners, the A1400 is a fantastic option.

It receives our Editor’s Choice award for budget cameras as a result of its low cost, high image quality when exposed to adequate light, and optical viewfinder.