Canon Powershot A3400 IS Review

In addition to a stylish appearance, the PowerShot A3400 IS Touch Screen Digital Camera from Canon also features a huge 3.0″ touch screen LCD that allows you to snap photographs with the tap of a finger on the screen. The A3400 IS is equipped with a CCD image sensor with a resolution of 16 megapixels, which is the 35mm equivalent of a 28 – 140mm lens.

The camera also makes use of powerful image stabilization technologies and processes to ensure that your high-definition films and photographs are neither unsteady nor blurry. This helps you to capture photographs that are sharper and more true to life without the use of undesired blur or camera shake. 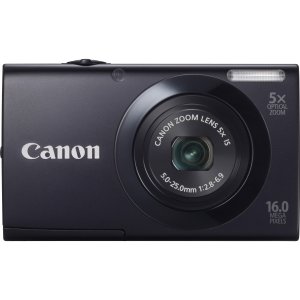 The PowerShot A3400 IS is equipped with touchscreen technology, which makes operating the camera even more convenient and pleasurable. Make your selection by pushing the screen and watching as an AF box appears on the screen. If you have a moving target, the box will even track them around the frame as they move around.

Simply releasing your finger will cause the shutter to open, capturing the captured image. Using the A3400 IS’s intuitive touchscreen features, you can also adjust camera settings, record and view movies, and do a plethora of other tasks.

As the brain of the camera, the DIGIC 4 Image Processor drives all of its innovative systems and functions, ensuring that you enjoy quick, dependable performance while still conserving battery life.

When used in conjunction with the camera, it can provide improved image quality, in addition to capabilities such as HD video, high-speed continuous shooting, and a Face-Detection Self-Timer.

Using a variety of image stabilization techniques, the camera finds the best and most appropriate approach for capturing your shot or video without annoying camera wobble throughout the capture.

With its 720p HD video resolution, the A3400 IS may also be used as a high-definition camcorder that can be carried about in your pocket. Capture more than just a picture of your memories by capturing them all in stunning high-definition (HD) resolution.

When you consider that it has video capabilities in addition to dozens of photographic options, it is a feature-packed camera that is likely to take up the same amount of space as your mobile phone.

Canon Powershot A3400 IS Image Quality

The 16 megapixel Fine JPEG preset, which results in an average image size of about 4Mb, was used to capture all of the sample images included in this review.

Canon Powershot A3400 IS Specs

Canon Powershot A3400 IS Conclusion

The Canon PowerShot A3400 IS was a joy to use. Because of its small size, we didn’t have to worry about it getting in the way when we weren’t using it. We could simply tuck it away in a pocket. Although the screen is bright, we believe that it enhances the appearance of the photographs thus keep a watch out for that.

Because of the greater size of the buttons, we had no issue using them, so photographers with large hands might want to consider this camera, with the touch-screen LCD offering a genuinely practical alternative.

Although we believe there is room for a slightly greater zoom, the Canon PowerShot A4000 IS’s specifications show that the only significant difference between the two cameras is the zoom, and it appears that Canon chose that as the deciding factor in place of the zoom.