Canon Powershot A3500 IS Review

The Canon PowerShot A3500 IS appears to be a touch broader than the normal digital compact camera in terms of width. It’s possible that this is done to fit the large screen on the rear of the device. On the other hand, the only version that can be found on any camera has a 3-inch screen. 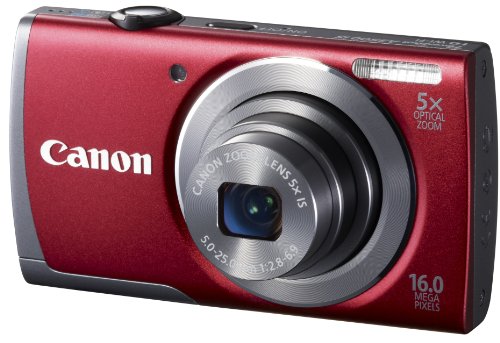 On the rear, it looks like the camera has been expanded broader in order to accommodate more space on the back of the device. However, this is not for the screen. In fact, it’s for the buttons that are slightly larger than usual and are located adjacent to the screen.

They consist of standard buttons such as direct Video record, User help, Main menu, Playback, and a command ring that may be used for a variety of functions ranging from flash options to wi-fi settings.

On the front, the tiny lens is contained within a large bezel, creating the impression that the camera is larger than it actually is. The AF emitter is located on one side of the lens, while a thin flash is located on the other.

In that there are just two buttons on the top of the Canon PowerShot A3500 IS, it takes a straightforward approach to design.

The power button is a long, thin button, but the shutter release button is bigger than the power button and rests significantly higher on the camera’s body. Shooting in the dark is made easier by the zoom switch being wrapped around it, which is easy to identify and use with the index finger.

Canon Powershot A3500 IS Image Quality

The Canon PowerShot A3500 IS often produces files that are around 7 MB in size, but we have also seen photographs that were as small as 3 MB at the same resolution, depending on the settings.

Canon Powershot A3500 IS Noise

As expected, the Canon PowerShot A3500 IS produces excellent images at low ISO. Even when viewed at full magnification, the image is smooth with no hints of noise, and the edges are sharp. Unfortunately, it is where the story ends if we continue to view it at maximum magnification.

At ISO 200, very faint noise traces start to appear. To be honest, it largely resembles salt and pepper noise and only appears in the picture’s darkest regions. The highlights and midtones are still good. However, it is clear that noise reduction software is in use, suggesting that the issue may be more serious than we initially think.

As we move up the settings, the noise issue gradually gets worse. At ISO 400, detail starts to deteriorate as noise reduction software tries to repair the damage.

At ISO 800, noise starts to weaken edges, causing them to suffer. There is almost no longer any detail in shadows or other darker areas. Additionally, noise begins to be audible at regular viewing distances.

Canon Powershot A3500 IS Specs

Canon Powershot A3500 IS Conclusion

The Canon PowerShot A3500 IS doesn’t shout, “BUY ME,” yet it’s not overflowing with cool features, either. Nevertheless, every manufacturer needs to offer a selection of cameras that cater to customers who aren’t looking for the newest feature. Some folks are merely interested in a camera.

A camera like the A3500 IS is one such. It utilizes technology that has been handed down from higher-end cameras and has seen some general programming upgrades to maintain the image quality at the level we have come to expect.

The Canon PowerShot A3500 IS’s primary weakness is actually its image quality, which is true of many compact cameras with small sensors. Even with noise reduction technology, the noise will still be visible if you use it at an ISO level higher than 100.