The Canon PowerShot G5 X Mark II is a powerful compact camera with a big sensor, rapid processing, and a versatile zoom lens. It is designed for professional photographers.

The layered architecture of the 20.1MP 1″ CMOS sensor, along with the DIGIC 8 image processor, allows for rapid AF performance, high-speed full-resolution photography at up to 20 frames per second, and UHD 4K30p video recording.

A 5x zoom lens, which spans a 24-120mm equivalent focal length range for wide-angle to short-telephoto fields of view, is included as an additional feature to complement the sensor and CPU. 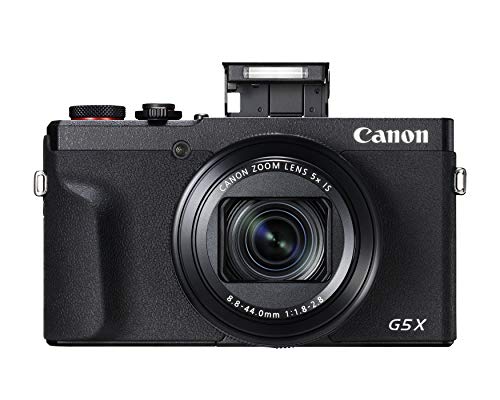 A maximum aperture range of f/1.8-2.8 is ideal for working in challenging lighting circumstances, and an Optical Image Stabilizer, which compensates for the impacts of camera shake, is also included.

The G5 X Mark II’s design is completed with a pop-up 2.36 million dot electronic viewfinder, a 180-degree tilting touchscreen LCD, and the ability to connect wirelessly to a mobile device through Bluetooth and Wi-Fi.

To look at it, the G5 X Mark II is a complete departure from the previous model. It’s significantly smaller now that the permanent viewfinder fixture has been removed.

In spite of the fact that it is concealed within the body, the camera still has a viewfinder, which can be activated by pressing the side of the camera’s trigger. The element must be manually moved into place in order for the camera to function properly.

Hiding the finder has resulted in a smaller overall camera, but other design considerations have also contributed to this reduction: the LCD screen, for example, is now a tilt-angle design rather than an on-a-hinge vari-angle design as was the case with the previous edition.

Although this means that the screen of the Mark II cannot be folded inwards for protection, the 180-degree upwards (and forward for selfies) and 45-degree downwards tilts will be sufficient for the majority of users.

Best Gimbal for Sony Alpha a1

According to reports, the Leica Q3 full-frame camera will finally add...

ABOUT US
DSLR Camera Search provides you with the latest news and reviews about Nikon, Canon, Sony, Pentax, and Fujifilm cameras and their lenses. We find the best cameras and lenses for beginners & professional photographers who are always looking for new photography gear.
FOLLOW US
© 2022 DSLRCameraSearch
Go to mobile version