The iconic box and circle form of the Canon PowerShot SD770 IS digital camera has defined the Digital ELPH aesthetic for more than ten years. This 10-megapixel model, according to Canon, has the slimmest body of any optical image stabilized ELPH model ever created, with a thinner yet larger battery pack. 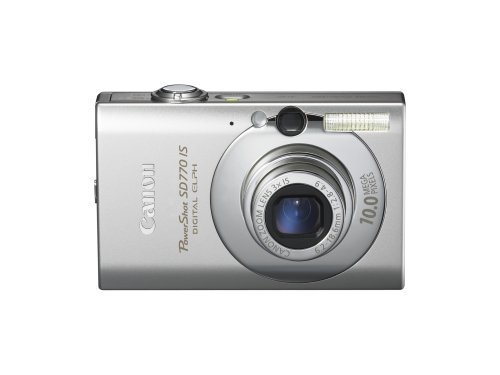 The Genuine Canon Face Detection Technology found in the Canon SD770 IS Digital ELPH helps to ensure that up to nine forward-looking faces in the frame are in focus and properly exposed, with or without flash, whether they are being posed for a family portrait, captured candidly with friends having fun, or are being spontaneously captured by a toddler grinning triumphantly as they take two halting steps.

The SD770’s LCD screen now has a new optional “AF Point Zoom” feature that digitally enlarges the face of the main subject to make it simpler to judge when to press the shutter to capture the moment.

Users can evaluate recently taken photos on the 230,000-pixel PureColor LCD II display of the SD770 by zooming in to check that the subjects are in focus and to look for such picture-damaging elements as closed eyes or improper expressions using Canon’s Image Inspection Tool.

Additionally, owners of the SD770 may trim pictures using the Trimming Function, centering them and producing classic close-ups of happy faces or famous cityscapes.

The exclusive DIGIC III imaging processor made by Canon is the “brain” of every new Canon digital camera. The camera’s stated better performance levels, which include speedier start-up, quicker autofocus, and quicker shutter response times that significantly outpace competitors with substantial lags, are attributed to this unique microprocessor.