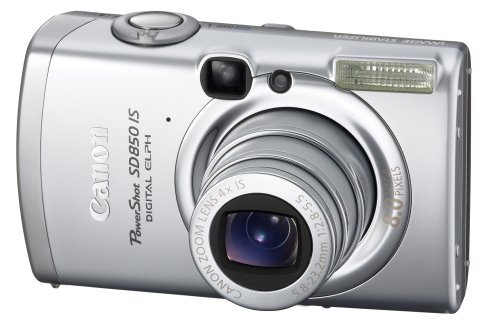 The SD850 also has a 2.5″ “PureColor” display, optical image stabilization (thus the IS suffix), and other features “Face detection and LCD monitor for AF, exposure, and flash optimization (up to nine faces). The red-eye reduction can also be accomplished in playback mode by using Face Detection. The SD850 also offers a “spy camera mode” with a frame rate of one second (well, time-lapse).

Compact cameras are more prone to camera shake while taking handheld pictures, particularly in low light. Canon’s optical progress over the past 70 years has made it possible to create lens elements that are ideal for the demands of compact photography.

Canon’s lens-shift optical Image Stabilizer (IS) technology is employed in the Digital IXUS 950 IS to reduce camera wobble brought on by unintentional hand movements. enabling the use of shutter speeds as high as

The optical Image Stabilizer is especially helpful when utilizing full magnification or the 2cm Macro mode, allowing for shutter speeds that are 3 stops slower than would otherwise be possible. The Ultra-High Refractive Index Aspherical (UA) lens is incorporated into the 4x optical zoom lens to produce a focal length range of 35-140mm (35mm equivalent) without compromising the camera’s thin profile.

Users can benefit from a variety of visual advantages because of PureColor LCD screens’ high resolution (230k pixels). 30% more colour tones have been added for more rich, lifelike replication.

Anti-reflective coating and the screen’s broad viewing angle make it simple to compose and review photographs even in strongly illuminated environments. Additional defense against bumps and scratches is provided by a scratch-resistant coating.

The LCD now shows shutter speed and aperture settings while taking pictures. The LCD will also show the ISO speed when using Auto ISO and High ISO Auto. For evaluation during playback, these camera settings are now saved as EXIF data.

The Digital IXUS 950 IS features ISO 1600 to enable flash-free interior photography, making it perfect for low-light settings like concert halls or galleries when using a flash is neither desirable nor appropriate.

When the camera detects a camera shake, a new Auto ISO Shift function gives users the option to increase the ISO setting and, as a result, shutter speed, with a single button click. This prevents blur.

There are a total of 18 shooting options available, including the new Creative Light Effect, which creates user-selectable designs around spots of light in the background of night images using the Image Stabilizer and longer exposure. These shapes can include stars, hearts, and flowers.

A scene that lasts two hours can be compressed into a smooth eight-minute or four-minute movie file by taking pictures at one-second or two-second intervals. Additionally, users have the option of recording QVGA and normal VGA videos with sound at 60 frames per second.

For easy access to settings for direct printing, the Digital IXUS 950 IS has a dedicated Print menu. Users who have full PictBridge support can print without a computer to any PictBridge-compatible printer. One-touch printing and quick uploads to Windows or Mac computers are made possible via a Print/Share button.

The Digital IXUS 950 IS supports the SDHC format for high-volume shooting in addition to SD and MMC memory cards. It has a 32MB memory card in the box.

The following Canon Software is included with the Digital IXUS 950 IS:

Customers who purchase the camera are eligible to join CANON iMAGE GATEWAY, which offers 100MB of online “personal gallery” space for sharing still images and video with loved ones.

For compelling underwater shots, users can submerge the camera up to 40 meters with the optional Waterproof Case (WP-DC15). To control camera buoyancy, there are weights (WW-DC1) that have been specially designed. Some additional accessories are:

The SD850 IS is a typical illustration of what makes Canon so great; it’s a beautifully built, well-designed, and the capable compact camera that doesn’t invent anything new but does it with the finesse that comes from years of fine-tuning and a refusal to scrimp on quality in order to achieve the lowest price.

Most importantly, it is a pocket camera that produces excellent images with the least amount of human effort.

For a camera in this category, image quality is excellent. The outcomes at base ISO are incredibly clear and precise.

Moving up the sensitivity range naturally causes noise reduction artifacts and blurring, but because of Canon’s smart noise reduction strategy, the camera consistently manages to keep a respectable degree of detail.

The lens plays a significant role in the overall “package” of image quality, and the SD850’s zoom does its fair share. The measured resolution is exceptionally crisp from edge to edge.