The Canon SD870 IS Digital ELPH has a retractable lens and a casing that is both beautiful and small. The horizontal sides of the case are rounded off, and the case itself has rounded corners. The Canon SD870 has a usable wide angle all the way up to a modest telephoto, covering a range that is similar to 28-105mm thanks to its 8-megapixel imager that is 1/2.5″ in size and its 3.8x optical zoom lens. 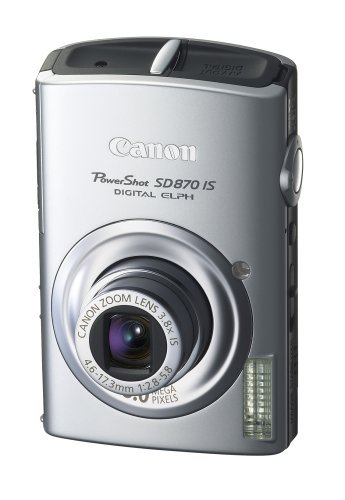 The camera has a fully automatic exposure mode, but the user has the ability to adjust it with 2.0EV of exposure compensation and four different metering modes to handle challenging lighting conditions. Additionally, there are a generous twelve Scene modes that make the camera user-friendly for novices.

Since the Canon 870 IS does not have an optical viewfinder, the only way to frame and examine photographs is by using the huge 3-inch LCD on the back of the camera. A long-exposure mode is included in the Canon SD870 IS ELPH, and it allows you to manually set exposure periods of up to 15 seconds.

The Canon ELPH SD870 features a relatively large ISO sensitivity range, ranging from 80 to 1,600, which allows it to operate more effectively in low-light conditions. Canon not only produces cameras but also a line of photo printers. The company takes great pleasure in the high degree of synergy between its cameras and printers.

Because it is a PictBridge-capable camera, the Digital ELPH SD870 is able to print straight to any printer that also supports PictBridge, eliminating the need for a computer to act as a middleman in the process. When connected to a Canon printer, on the other hand, you have the ability to specify paper size, print quality, and a number of other characteristics, but standard PictBridge connections do not provide this functionality.

The Canon SD870 is an improvement on the Canon SD800, which was the previous wide-angle model in the ELPH line. This improvement comes in the form of an increase in the number of megapixels from 7.1 to 8.0, as well as an increase in the size of the LCD from 2.5 inches to 3.0 inches. In addition to that, they increased the screen resolution from 207,000 to 230,000 pixels.

Both cameras make use of the same fundamental lens design, which is a 28-105mm (35mm equivalent) lens with a minimum aperture of f/2.8 at the wide end and f/5.8 at the telephoto end of the zoom range. In addition, Canon revised the design of the SD870, resulting in a camera that is both heavier and smaller than before. The SD870 does not have an optical viewfinder since the huge LCD made it impossible to include one in the design. This is the most noticeable difference in the design.

The Canon SD870 had results about autofocusing that were quite inconsistent. In photographs where the subject was staged, I discovered that the camera had no issue determining the apparent areas of focus; nevertheless, in pictures taken more “at the moment,” the camera occasionally failed to focus on the subject.

When I used face detection on a subject facing me, I never had any issues with the camera’s ability to get excellent focus on the subject. However, face detection would fail to “lock on” to the target in conditions with insufficient light, mainly if the subject’s face was even slightly turned away from being directly in front of the camera.

The camera could correctly focus in an environment with as low as 1/16 of a foot-candle of light, as indicated by the laboratory setup. There is always a focus-assist lamp, which you can turn off, and it does an excellent job of helping you get the focus where it needs to be.

Photos taken with the Canon SD870 have excellent exposure and a good saturation level. When looking at the photographs taken at our testing facility, the colors appear to be slightly oversaturated, with the red and blue tones being pushed to their limits.

Naturally, these are just the settings set by default; you can adjust the way colors are presented by going through no less than eleven different colors presets. These color presets include Vivid, Neutral, Sepia, Black and White, Positive Film, Lighter Skin Tone, Darker Skin Tone, Vivid Blue, Vivid Green, and Vivid Red, as well as Custom.

The user can modify the amount of color and the quality of the color in the photographs that they will take, thanks to all of these choices. To make matters even better, you should not settle on these color settings before you begin shooting. Instead, you may go into playback mode and pick a different color profile.

Then, you can either overwrite the existing one or make a new copy with the updated color settings. The route a little bit is confusing to take. You do this by selecting the menu button while the track is playing and then selecting the My Colors option. This will offer you the options described above, with the noticeable exclusion of the custom profile.

When assessing the picture quality of the photographs that were taken with the SD870, I will take several factors into consideration, including sharpness, ISO noise, noise reduction, image characteristics that are inherently associated with the lens, and flash performance.

The Canon SD870 maintains the characteristics that contributed to the PowerShot SD800’s status as an excellent camera. These characteristics include a high-quality wide-angle lens with a focal length of 28 millimeters, face-detection autofocus, optical image stabilization, an abundance of scene modes, and a few key improvements to the overall operation of the camera. Even in movie mode, you can use the wide-angle vision, which makes taking up-close and intimate films with your family very simple and enjoyable.

An outstanding accomplishment certainly is the fact that the 8-megapixel sensor of the SD870 can offer a resolution that is capable of providing high-quality 11×14-inch prints up to ISO 400. The LCD size has been expanded, but the optical viewfinder has been eliminated. Since optical viewfinders are somewhat of a joke on most digital cameras with exceptional optics, most users won’t miss having one. The absence of a viewfinder is more than compensated for by the 3-inch LCD, which also performs admirably in direct sunlight.