The Canon SD890 IS is a 10-megapixel point-and-shoot camera with a 5x optical zoom lens integrated with Canon’s image stabilizer. This image stabilizer moves the lens elements when movement is detected, which helps to prevent fuzzy shots.

In addition to the simple point-and-shoot options that are available on other cameras, the Canon SD890 IS provides the user with the ability to make adjustments to the camera’s sharpness, contrast, and saturation levels, as well as a plethora of color options that allow the user to emphasize specific colors, lighten or darken skin tones, and more. The Canon SD890 IS is a versatile camera that performs admirably indoors and out because of its inclusion of both a 2.5-inch LCD and an optical viewfinder, which is unusual in modern cameras. 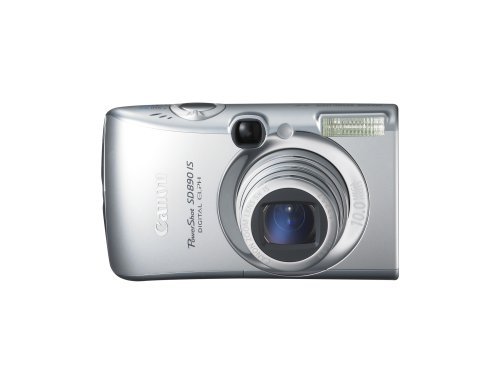 The Canon SD890 can capture photographs even when there is very little available light because of its image stabilization and high ISO performance that is above average.

Face Detection is a feature included in the Canon SD890 IS that, when activated, scans the surrounding area for faces and then makes automated adjustments to the camera’s exposure, flash output, and white balance settings. This feature helps to guarantee that you shoot the best shot possible. The camera also has a Face Detection & Track function, which allows you to zero in on the subject of your photograph and keep the face in focus even if the subject moves while you are shooting the image.

The Canon SD890 IS a 10-megapixel digital camera that is second from the top in Canon’s Digital ELPH line. It is only surpassed in terms of resolution by the Canon SD950 IS, which has 12 megapixels. Still, the Canon SD890 IS has a 5x optical zoom, which distinguishes it from its siblings and the majority of the other models available on the market.

Compared to the Canon SD870, which has a wide-angle lens with a focal length of 28 millimeters, the Canon SD890 IS, which has a focus range of 37 millimeters to 185 millimeters, can handle the majority of photographic situations and completes Canon’s Digital ELPH product line. This point-and-shoot camera is small enough to fit in a pocket and doesn’t require any instruction making it even more tempting to users.

There is a good range of scene modes and other point-and-shoot fundamentals available for easy shooting, but there are also enough choices for tweaking to satisfy amateur photographers who want a little bit of control without having to upgrade to a camera with complete manual exposure controls.

As was to be expected, the Canon SD890 IS produced photographs that were attractive to the eye, with richly saturated colors while maintaining a natural appearance. The exposures were, for the most part, absolutely perfect, and the camera performed well under some challenging conditions.

When I was photographing the columns at the Jefferson Memorial, I found myself shooting from the inside, looking out. Even though the sky was a slate grey, the Canon SD890 IS managed to balance the light-colored columns against the atmosphere very well.

The Canon SD890 IS also able to catch the delicate marbling in the stone columns, even though marble columns aren’t the most engaging or colorful subjects to photograph.

It’s true that there was some purple fringing around the edges, but when I blew up the image on my computer to 100 percent, the effect wasn’t all that noticeable. As the lens’s focal length was extended, chromatic aberration was reduced.

In general, the lens of the Canon SD890 is pretty good. It produces clear photos and exhibits less blurring in the corners than the lenses on other small models. The fuzziness was often relegated to the extremities of the corners alone. Canon deserves praise for designing a tiny camera with a lens of such excellent quality.

The image stabilizer on the Canon SD890 IS worked very well, and as a result, I could easily capture sharp images at a shutter speed of 1/60 of a second. This is a shutter speed that I typically would not dare attempt to handhold under any circumstances, even when I haven’t been buzzed out on caffeine.

However, because of the image stabilization in shooting mode offered by the Canon SD890 (as opposed to continuous or panning methods), I was able to shoot at a hand-held shutter speed that was far slower.

You shouldn’t have any trouble producing prints of any size up to around 16 by 20 centimeters with the Canon SD890 IS since it performed an excellent job of capturing details, particularly in regions with a solid contrast. It is essential to keep in mind, however, that although fine details are not nearly as evident in areas of a subtle difference, the Canon SD890 IS is still superior to its competitors in this respect.

You’ll be relieved that despite the high ISO, you can still produce some high-quality prints. Even while the noise may be more noticeable on the screen of your computer, the photos will look great. Images captured at this ISO will produce pleasing-to-the-eye 8×10 prints, except for slight shadow noise at ISO 400. However, this noise is unlikely to be discernible while examining the photo.

If you increase the ISO to 800, 8×10-inch prints will look fine when presented at standard viewing distances, such as hanging on the wall or placing them on a table; nevertheless, you may find that the quality of a 5×7-inch photo better suits your needs.

When the camera is set to ISO 1,600 or pushed to ISO 3,200, things start to go south pretty quickly, and you probably won’t be thrilled with even 4×6 prints by the time you’re done. However, compared to most of its rivals, the Canon SD890 IS has superior high ISO performance overall.

The Canon SD890 IS is a compelling camera that has a few oddities that should be easily outshined (for most people) by its finer features, most notably its 5x optical zoom with a focal length of 185mm; it is great for long pictures that the majority of pocket digital cameras can’t reach.

The lens also benefits from Canon’s powerful optical image stabilization technology, which makes capturing pictures in low light easier and improves the quality of telephoto images as well. High ISO performance is also pretty good, allowing 13×19-inch prints to be feasible at the lower ISOs; if you keep below ISO 800, you can even print good quality 5x7s. Both of these capabilities are due to the camera’s image sensor.

The Canon SD890 IS is an advanced point-and-shoot camera with a feature set that can adjust colors, sharpness, saturation, and contrast. Additionally, the Canon SD890 possesses innovative Face Detection technology that identifies up to nine faces concurrently and follows a moving face while in the frame. The Canon SD890 IS a joy to use overall, and I highly recommend it. It’s a cute small camera that may be an excellent travel companion everywhere you go, thanks to its portability.