The SD900, introduced along with a few other PowerShots just before Photokina, is positioned at the top of Canon’s highly successful ELPH / IXUS range. It features the highest resolution available to date, 10 megapixels (on a 1/1.8″ CCD), and was announced alongside those other PowerShots. It also has Canon’s brand-new DIGIC III processor and another first: a body made of solid titanium, which, in addition to lending an air of sophistication, allows for a camera that is both more lightweight and more resistant to wear and tear. 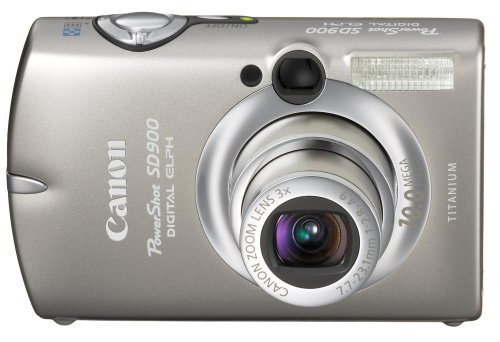 Aside from the body material (which is replete with a ‘TITANIUM’ logo), the SD900 is externally quite similar to the SD550 (IXUS 750). It also has a strong familial resemblance to all of the other models in the current line. Externally, it oozes quality, as one would expect from a small point-and-shoot camera priced at $450, and it is well made, with an exceptional fit and finish, much like its predecessor. There isn’t much in the way of a grip, there aren’t any anti-slip surface textures, and the approach to the external controls is pretty minimalistic. All ELPH and IXUS cameras are designed according to the principle of “form first, function second,” with few concessions made to operational or ergonomic concerns.

Canon’s finely-tuned user interface (which has been honed over many generations of compacts) is one of the best. The simple, straightforward FUNC menu and dedicated buttons for ISO, flash, drive, and focus mean that – for the average user – all of the commonly needed controls can be used quickly and easily. In all honesty, this is a “point and shoot” camera, but one that has a few nifty tricks under its sleeve. However, it does have a few ingenious features up its sleeve.

The pebble-smooth exterior, combined with the lack of any discernible ‘grip,’ means that it can feel a little precarious held in one hand but is perfectly usable. The SD900 weighs approximately 194 grams when it is fully loaded, which is just heavy enough to feel solid and stable in the hand. The placement of the shutter release and the zoom rocker makes operation with one hand simple; nevertheless, you should still ensure that the strap is wrapped around your wrist if the camera escapes your grasp and begins to move in the wrong direction.

Even if you turn the camera off, it will remember the custom white balance setting you had previously set. When shooting normally outside, the auto white balance serves its purpose admirably (as confirmed by our studio tests). Indoors, the results are a bit more hit-or-miss, as we’ve found that incandescent (tungsten) lighting causes a fairly strong orange color cast with the majority of Canon PowerShots (though switching to manual gives a pretty neutral result)

Exposure is generally excellent (a little on the underexposed and warm side, which is no bad thing). Flash recycling is quite speedy (particularly if you turn the red-eye reduction off). Up to approximately 2 meters in the distance, the AF illuminator performs exceptionally well.

The macro mode of the SD900 is most effective at the wide end of the zoom, as is typical for most compact digital cameras. At this end of the zoom, you can get as close as 5 centimeters, which is not bad for an “ultra-compact,” which captures an area 52 millimeters across. There are cameras that have better macro performance than the SD900 (even in the range of SD/ELPH cameras), but the capabilities of the SD900 are sufficient for the typical user of a compact “point and shoot” model.

Even though the performance is less impressive at the long end of the zoom (a subject distance of 30 centimeters captures an area just over 10 centimeters wide), it is still quite helpful. When filming significantly closes up at the wide end, there is unavoidably going to be some degree of distortion. Still, it is not overly severe, and it is certainly less powerful than with many of its competitors.

The SD900, like other contemporary DIGIC II or III IXUS/SD devices, has a highly responsive feel to it, and its performance is essentially comparable to that of the other models in the line, with the exception that playing is little slower due to the bigger 10MP files (not that you’d notice). Although the focus speed is outstanding when there is sufficient light, it does unavoidably slow down significantly in settings with less light, when using the macro mode, and when using the extended range of the zoom. The shutter lag is reduced while using the viewfinder, but using the screen results in video lag; nonetheless, this is not a significant difference for most shooting situations.

It takes the SD900 around 1.7 seconds to process and save a 4.7MB 10MP/Super Fine JPEG file, which is not terrible going at all for a camera of this sort; however, the SD900 will most likely benefit from utilizing faster cards. Playback is also quite quick, taking less than half a second for full-sized photographs to appear after being loaded (if you use the fancy transition options, it takes a little longer to scroll through images, but it sure looks nice). If you hold down the left or right arrow key, the SD800 will cycle through low-resolution previews of the photographs stored on your card at a rate of roughly 10 per second. This is useful if you want to look through hundreds of shots that have been recorded quickly.

The battery life, like that of most models in the SD line, is nothing spectacular; nonetheless, with around 230 shots (according to CIPA standards) per charge, it is comparable to that of many of its competitors and is not much poorer. If you turn off the screen and look through the optical viewfinder instead, you may prolong the battery life to as many as 700 shots on a single charge. This is because the beautiful big screen consumes most of the power.

When it comes to compacts, the choice of an exotic material is not nearly as much about reducing weight or increasing resistance to corrosion as it is about achieving a higher level of elegance and exclusivity. There will always be a market for over-engineered, premium-priced products, and the SD900 does have a certain ‘feel’ that distinguishes it from its numerous steel, plastic, and alloy competitors. There’s nothing wrong with that – it’s just that there will always be a market for such products.