The Canon PowerShot SD960 IS Digital ELPH is a digital point-and-shoot camera that follows the trend toward more colorful and expressive digital camera bodies. It features smooth contours for a very comfortable hold, along with a compact body and capable exposure system, both of which recommend it well for use while traveling. 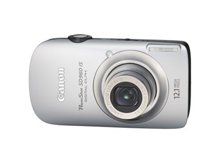 The PowerShot SD960 is designed to appeal to the aesthetic preferences of both men and women with its range of muted pastel colors, including blue, pink, gold, and silver. The PowerShot SD960 Digital ELPH delivers HD video recording and advanced automatic processing technologies capable of handling any problem. The camera is equipped with a CCD with 12.1 megapixels and a lens that has a 4x optical zoom.

The 4x optical zoom lens of the PowerShot SD960 Digital ELPH has a tremendous maximum wide-angle option at its corresponding 28mm, which provides a bit more versatility than the typical 35mm. The Canon PowerShot SD960 features a genuine optical image stabilization system, which can assist in eliminating blur while shooting in low light or with a telephoto lens set to its maximum magnification.

The camera is equipped with several helpful automatic features, such as a Smart AUTO mode, in which the camera chooses the optimal settings based on 18 different predefined shooting situations, as well as Canon’s improved DIGIC 4 processor, which includes evolved Face Detection for subject tracking.

The PowerShot SD960 Digital ELPH is a digital camera that can capture high-definition video at a resolution of 1,280 by 720 pixels and is equipped with a mini-HDMI port for making a direct connection to an HD monitor. Active Display, which allows you to flip between photographs during playback by shaking the camera in a manner reminiscent of Apple’s iPhone technology, is yet another exciting improvement included on the PowerShot SD960 (as opposed to simply scrolling with the arrow keys).

Aside from these changes, most of Canon’s basic digital camera capabilities are included in the PowerShot SD960. These features include user-adjustable exposure compensation, metering, ISO, My Colors, and iContrast, as well as user-adjustable white balance.

The Canon SD960 has a charming feel in the hand because of its streamlined design and diminutive dimensions. It is compact enough to fit in your pocket and has a minimum number of controls for you to fiddle with. Because of its excellent shine, similar to nail polish, the glossy finish on the front panel has to be protected by a protective cover as soon as possible. Scratches will be pretty noticeable on this surface.

Color: The Canon PowerShot SD960 has increased the saturation of blue solid and red tones only a tiny bit, but not to the point where these colors predominate in the images it produces. The accuracy of the hues appears to be quite excellent generally, with cyans being somewhat pushed toward blue, reds being made toward orange, and oranges being pushed toward yellow. Lighter skin tones tend to hint at pink, whereas deeper skin tones have a little bit of an orange undertone to them. However, impressive outcomes overall.

Noise and Detail: The level of detail is pretty good at ISO 80 and 100, but it begins to soften at ISO 200, even though it still retains a considerable amount of its strength. Detail definition is hindered at an ISO setting of 400 due to the presence of luminance noise and efforts to minimize noise. When using an ISO of 800 or 1,600, the photographs take on the appearance of being seen through a hazy window. The resolution of the image is reduced when the camera is set to 3,200 ISO in an effort to maintain some level of detail; nonetheless, the final product is still somewhat grainy.

The flash of the Canon PowerShot SD960 retains its full brightness at an ISO setting of 100, and its wide-angle coverage extends only to a distance of around 8 feet before it begins to fade. Even at a distance of six feet, the intensity is insufficient when the telephoto is set to its maximum setting.

The tungsten lighting test was far more easily handled by the Canon PowerShot SD960’s Incandescent and Manual white balancing settings than it was by the camera’s Auto mode, which generated a solid warm cast that looks almost sepia-like. The results from both the Incandescent and Manual exposures appear extremely decent, if just slightly lukewarm.

Canon PowerShot SD960 IS a Performance

The Canon 960 IS takes the concept of small pocketability to a new level by including a screen that can be viewed from a wide angle and a set of controls that have been significantly reduced. It’s not that the Canon 960 is particularly thin from front to back; instead, the widescreen LCD makes the camera quite a bit shorter than the majority of its rivals.

The Canon PowerShot SD960 is a capable camera that excels in many different performance categories. The quality of the image is acceptable when using the wide-angle and telephoto settings, with significant blurring occurring in just one corner of the picture at each stage and just moderate blurring happening in the other corners. The lens distortion of the Canon SD960 is fairly low, and although being somewhat high and brilliant, chromatic aberration does not significantly detract from the quality of the camera’s photographs.

The noise suppression is very average in the middle-range ISOs, but the color reproduction and exposure are pretty satisfactory. Although the duration between shots in the cycle is a little slow, the shutter lag is quite good.