Touchscreen technology has at long last been included in Canon’s products. In a move that was only right, they chose to introduce this innovative new feature on the PowerShot SD980 IS, which is one of the Digital ELPH line’s models that stands out for its particular characteristics. Because it is the first ELPH camera to sport a 24mm lens, the Canon SD980 is a one-of-a-kind device. 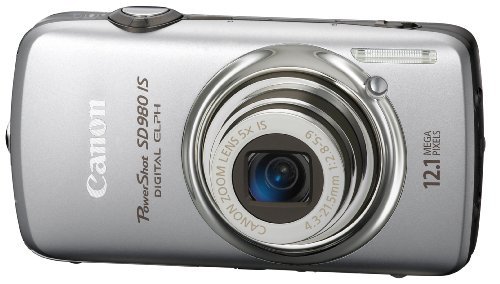 The Canon SD980 boasts several great features, including a CCD image sensor with 12.1 megapixels, a 5x optical zoom lens, a DIGIC 4 image processor, and the most recent iterations of Face Detection, Blink Detection, and Motion Detection. It also has a lot of other great specs.

Because of its streamlined design and compact size, the Canon PowerShot SD980 is very convenient to store. A wrist strap gives a little more security when you’re on the go, and the SD980’s strap includes a small pen to assist you with the new touchscreen if necessary. Gentle curves guarantee that it won’t snag on pockets, and a wrist strap provides a little added protection when you’re on the move.

When you don’t have the time to figure out exposure settings, you can still get fantastic pictures with the Canon SD980 IS thanks to its variety of intelligent automated settings, which can be used in conjunction with the camera’s minimal external controls. There are no fewer than 20 different shooting modes available for selection, or you may use the user-friendly Smart Auto mode, which chooses an exposure mode for you based on one of 22 different shooting scenarios that have been specified.

Even though we aren’t often fond of touchscreens, we think Canon did an excellent job with this one by restricting the touchscreen’s functions and still providing some control buttons. The Canon PowerShot SD980 IS is the first Canon’s Digital ELPH line model to have an LCD touchscreen.

The Canon SD980 delivers the same fantastic usability and performance that we have come to expect from the PowerShot family of cameras. This model is relatively small and features an easy-to-learn point-and-shoot interface.

The Canon SD980 IS one of the most compact PowerShot models, and because of its streamlined design, it fits well in hand and is an excellent choice for carrying in pockets.

Because the Canon SD980 has such smooth curves and is too small to have a handgrip, I highly recommend attaching and utilizing the wrist strap to avoid the camera slipping through your fingers while you’re using it. This will also save your hands from getting tired.

However, the Canon emblem on the front panel is slightly elevated, which provides some grip for the fingers as they cradle the right side of the device. However, this is about all you get.

The color appears to be somewhat accurate as a whole, with tiny variations in saturation and hue. Bright reds are oversaturated, but the PowerShot SD980 IS does an excellent job of keeping bright blues closer to how they appear in real life.

In terms of color, the cyans are visibly pushed toward blue, and some of the yellows are pushed toward green, but the effects are positive. Tones of red and pink have been subtly added to lighter skin tones, while yellow-orange undertones have been brought out in deeper complexion tones. Performance that is, on the whole, better than average here.

Noise is discernible at ISO 80 to 200, with substantial blurring beginning at ISO 400. Detail is well-defined at these ISO settings. At ISOs 400 and above, luminance noise becomes the primary concern, and at ISOs 800 and 1,600, fine detail becomes significantly more obscured.

At an ISO setting of 3,200, the camera is required to lower the maximum resolution in order to maintain whatever level of detail it can, however, the resulting images are still rather grainy.

The lag time for the full autofocus shutter is quite good, coming in at 0.46 seconds while shooting at wide-angle and 0.42 seconds when shooting at full telephoto. The prefocus shutter latency is 0.085 seconds, which is a very respectable time.

In single-shot mode, the cycle time is reasonable, with a picture being taken once every 2.29 seconds. The continuous mode of the SD980 is rated at 0.8 frames per second by Canon, which is a somewhat sluggish pace.

After a discharge at maximum power, the flash of the Canon PowerShot SD980 IS recycles in around 8 seconds, which is on the lower end of the spectrum.

Combining the well-known Canon Digital ELPH brand with cutting-edge LCD touchscreen technology is, without a shadow of a doubt, a potent combination in and of itself. The PowerShot SD980 IS is a very competent camera since it has a CCD with 12.1 megapixels, a strong DIGIC 4 engine, a 5x optical zoom lens, and image stabilization.

The Canon SD980 IS provides a high level of quality despite its little size by virtue of its excellent exposure and color in general, its small number of settings, and its overall ease of use. The Face, Blink, and Motion Detection technologies, together with the 22 different preset circumstances, may be used in conjunction with the Smart Auto mode to achieve the ideal exposure in a wide range of shooting scenarios.