The Canon PowerShot SD990 IS digital camera from Canon has taken the position of the company’s previous flagship model, the PowerShot SD950 IS, in the company’s Digital ELPH product line. The Canon SD990 keeps the same 1/1.7-inch CCD image sensor size as its predecessor, but it packs in more pixels, increasing the camera’s resolution from 12.1 to 14.7 megapixels.

Additionally, the camera’s processor has been upgraded from a DIGIC III type to a DIGIC 4 type, which enables servo-AF tracking. The Canon SD990 maintains a 3.7x optical zoom, which provides an equivalent focal length range of 36mm to 133mm. Across the whole zoom range, the maximum aperture ranges from f/2.8 to a relatively dark f/5.8.

The focusing mechanism of the Canon SD990 now has better face identification capabilities. Additionally, the camera is equipped with a Face Detection self-timer that snaps a picture automatically two seconds after an extra face enters the frame. The Canon PowerShot SD990 IS LCD has a resolution of 230,000 dots, measures 2.5 inches diagonally, and has a better contrast ratio than previous models. 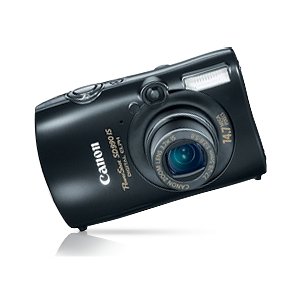 The ISO sensitivity may be adjusted anywhere from 100 to 1,600, and there is also a high-sensitivity scene mode that increases the sensitivity to increase to 3,200. There is no change to the shutter speeds, which now range from 1/1,600 to 15 seconds. Evaluative, center-weighted, and spot metering are the several modes available. Furthermore, a program mode is available on the Canon SD990, in addition to a completely manual way in which the aperture and shutter speed may be adjusted manually. In addition to its sixteen scene settings, the Canon SD990 features a brand-new Intelligent Contrast Correction mode.

The Canon SD990 captures movies using H.264 MOV compression, a more recent technology that allows for reduced file sizes while maintaining a similar level of video quality. The Canon PowerShot SD990 uses Secure Digital cards to store still photographs and videos, and it comes with a 32MB card already installed (very small). The Canon SD990 has computer access through USB 2.0 High Speed and video output in both NTSC and PAL formats. The power comes from an NB-5L lithium-ion rechargeable battery that is unique to the device.

The outside casing of the Canon SD990 was modified from the SD950, which it so closely resembles, with an eye toward curves that should nearly be termed hips. This was done to differentiate the two models.

If you don’t consider the special edition red model developed to mark the production of the 100 millionth PowerShot, the only available colors are black and silver. And much like the SD950, the Canon SD990 is somewhat cumbersome for a device that is being to as an ELPH. It is not what you would refer to as an ultra-compact device.

The Canon SD990, on the other hand, is a pocketable camera due to its small size. However, it feels about as awkward as holding a soap bar when you go around with it in your hand. The slick surface of the Canon SD990 is not kind to sweaty grips, but the device comes with a practical wrist strap.

Images may be saved to an SD card or an SDHC card using the Canon SD990. Additionally, it can read MMC, MMC Plus, and HC MMC Plus memory cards. A 2GB card can store about 306 JPEGs of excellent quality or contain 23 minutes and 49 seconds of broadcast-quality video.

According to Canon, a full charge of the rechargeable lithium-ion battery found in the Canon SD990 enables the user to take around 280 photographs (unless you use Quick Shot mode, which cuts it to 180). That number increases to 700 if you turn off the LCD, which is possible given that the camera also has an optical viewfinder. Therefore, if the battery power is low, turn off the LCD to increase the time spent shooting. According to Canon, playback can last for up to six hours. That is far more than I need for a day’s worth of shooting.

The Canon PowerShot SD990 IS, like other Canon PowerShots, generates vivid colors that are attractive to the eye but with a touch of oversaturation in the reds and blues (often more appealing to consumers). In terms of color, some shifts are seen in the cyans and yellows, and some reds are pushed toward orange. The darker skin tones have a somewhat higher saturation level, whereas the lighter skin tones are slightly accurate.

At an ISO of 80, there is already a slight loss of detail, although the chroma noise (color noise) is under control until somewhere near ISO 1,600. After that, the pieces get pretty fuzzy as early as ISO 200, with shallow detail definition occurring at ISO 400 and above. The Canon SD990 IS has a maximum setting of ISO 3,200, which lowers the full resolution to 1,600 by 1,200 pixels. However, the resulting images are grainy (though luminance noise appears less obtrusive).

The flash on the Canon SD990 works effectively at an ISO setting of 100 at wide-angle out to around 11 feet before it starts to fade, and even beyond that, the reduction in brightness is just modest. Unfortunately, it is already somewhat dark at six feet and worsens as you get into a telephoto.

The shutter latency is acceptable, coming in at about 0.50 seconds at wide-angle and 0.60 seconds at maximum telephoto when the autofocus is fully engaged. The prefocus shutter latency is 0.085, which is not lightning-fast but relatively fast overall. Although testing the Quick Shot option was challenging since we could not alter the shutter speed, we could get a much quicker time of 0.22 seconds. Therefore, this mode is recommended for action shots.

Despite some of our concerns regarding the image quality produced by its 14.7-megapixel sensor, the Canon PowerShot SD990 IS is, all things considered, a digital camera of high quality. The corners are blurry, and there is a chromatic aberration when the lens is set to its widest angle, but this is to be anticipated with cameras of this size. Image quality is improved when using a lens with a medium or telephoto focal length. When shooting wide-angle, barrel distortion is somewhat noticeable, but it is virtually undetectable when shooting telephoto.

Bright and brilliant color is produced with the Canon PowerShot SD990 IS. There is some small oversaturation in some reds, but overall, the color is still acceptable. Even at low ISOs, there is some noticeable luminance noise and a noticeable loss of clarity starting at ISO 80. The cycle times are a bit slow, which is not surprising given the quantity of data pouring off the sensor, but the shutter latency is good. A new issue we do not typically see with Canon cameras is that lens flare causes bright things to shine a little more than we would want to see.