The sensor of the Canon PowerShot SX130 has been upgraded from 10 megapixels to 12 megapixels, and its size has been reduced from 1/2.5 inches to 1/2.3 inches to accommodate the new resolution. The body of the Canon SX130 features a layout comparable to that of its predecessor, although it has been given a somewhat updated appearance. 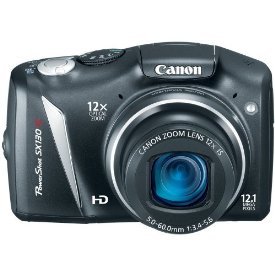 The dimensions of the new body are 4.5 inches by 2.9 inches by 1.8 inches (113 millimeters by 73 millimeters by 46 millimeters), and the weight has also grown somewhat to 11.1 ounces (314 grams) when adding the battery and the flash card. Even though it won’t fit in the pocket of your shirt, the Canon SX130IS isn’t an unreasonable amount of bulk.

The Canon PowerShot SX130 has a sensor with a resolution of 12 megapixels and a lens magnification factor of 12 times, resulting in a zoom range that extends from a usable wide-angle setting of 28 millimeters to a strong telephoto setting of 336 millimeters. However, the improved reach at the wide-angle end comes at a price — the maximum aperture changes from f/3.4 at wide-angle to f/5.6 at telephoto, making it notably less luminous than the previous camera. The “IS” in the name of the SX130 gives away the fact that it still has Canon’s Image Stabilization technology, which helps combat the effects of blur caused by camera shake. This is especially crucial when working with longer focal lengths.

This model does not include an optical viewfinder, which is not surprising given that it is a long-zoom camera. Images are framed and examined on a color LCD 3 inches in size and 230,000 pixels. The Canon PowerShot SX130 IS provides users with not just a variety of Scene modes and a Program auto mode but also the option to regulate the shutter speed manually and aperture settings of the camera.

Canon’s implementation of face detection is included, and the functionality of face detection is linked not only to the autofocus system but also to the exposure metering and white balance systems to ensure that portraits have the appropriate exposure. This is done so that the camera can accurately expose faces.

A bright orange LED is the autofocus aid when working in low-light conditions. Adjustments and adaptations are available in a wide variety for more experienced photographers. These include a range of ISO sensitivities (from 80 to 1,600 equivalent), metering modes (Evaluative, Center-weighted average, Center spot, and Face Detect AE), and white balance choices (Auto, Daylight, Cloudy, Tungsten, Fluorescent, Fluorescent H, Flash, Custom). Compared to its predecessor, the PowerShot SX130 has a flash range that is somewhat shorter when the ISO sensitivity is set to automatic control. The PowerShot SX130 has a maximum reach of 9.8 feet when shooting at wide-angle and 8.2 feet at telephoto.

The Canon PowerShot SX130 IS can save pictures to Secure Digital or MultiMediaCard media, including the most recent varieties of media with increased capacity for SDXC cards. The Canon SX120IS, just like its predecessor, the SX120, is powered by a pair of AA batteries. These batteries might be alkaline, lithium, or NiMH rechargeable types. You will find a pair of disposable alkaline batteries in the bundle of products you have purchased.

The Canon SX130 is more similar to that of a point-and-shoot camera than the designs of many other long-zoom cameras, which tend to replicate the designs of digital SLR cameras by having aggressive grips protrude and electronic viewfinders that are perched atop the lens.

Your left index finger can rest on small ergonomic support to the left of the lens barrel. This helps to secure your grasp on the lens. Although you can get away with holding the camera with one hand and still obtain good shots, I found that using both hands to gain a good grip on the camera was much more comfortable. In addition, even though it is somewhat more significant than a pocket camera, the Canon SX130 does not come equipped with a viewfinder.

The Canon SX130, when equipped with its memory card and battery, weighs 11.1 ounces (314 grams). This is the same weight as other cameras with more extensive zoom ranges. This heaviness is not necessarily a bad thing, nor is it a hardship since it does not prevent the camera from having a significant feel to it. The Canon SX130 has an ergonomic design that makes it easy to grip and use.

In addition to that, it has a certain amount of mass to it. The Canon SX130 is a touch on the tall and lengthy side, measuring 4.46 inches in height, 2.88 inches in width, and 1.80 inches in depth (113 x 73 x 46 mm). It is possible to carry it in a large jeans pocket, but doing so will not be exceptionally comfortable; thus, when going on extended travels, it is recommended that you use a more compact camera pouch or backpack.

In terms of its physical appearance, the Canon SX130 will not attract much attention, yet, the camera’s black-speckled finish and silver accents help to create a pretty subtle impression.

The boxy design of the PowerShot SX130 has at least one positive aspect: the control buttons are of good size. A pop-up flash is located on the top of the camera. This flash must be raised or lowered manually, as the camera will not do it independently; alternatively, it can be closed.

Within the confines of a zoom ring can be found a Shutter Release button that is both sizable and quick. Next to it, you’ll see a button almost flush with the camera’s body. Don’t worry—you’ll have no trouble activating it.

You’ll find a small Playback button on the back of the Canon SX130, as well as a pair of controls for face selection and exposure compensation, followed by a scroll wheel that doubles as a four-way controller that gives you access to ISO, Macro, and Manual focusing, as well as the flash and the self-timer.

This scroll wheel is a good addition because it helps speed up the process of making modifications, navigating menus, and playing back photos. The last set of controls is located beneath the Control dial, and they are used to operate the Display and the camera’s internal menu.

A little ramp to the left of the Playback button may be used as a thumb grip and helps keep your fingers away from the Playback button. Unfortunately, they did not add any texture to the painted surface of the Canon SX130, as this might make it more challenging to hold the camera.

The large zoom lens is one of the primary attractions of the Canon SX130IS. Its 28mm-336mm (35mm equivalent) optical zoom lens provides the advantages of wide-angle shooting in addition to the flexibility to zoom out to catch more distant action. There is no option to change the zoom speed on this camera, which means you cannot control the speed of the lens as it zooms from wide-angle to telephoto by varying the amount of pressure you apply to the zoom lever or by changing the settings in the camera’s menu.

Because of the nature of the focal length, the lens needs to have optical image stabilization, which is indicated by the letter “IS” in the name of the camera. The Canon SX130IS has several different image stabilization modes, so you may choose the one that best suits your needs. You may turn the image stabilization to Continuous mode by using the Menu. This mode (you guessed it) continually adjusts the lens element to maintain the sharpness of your photographs. The mode labeled “Shoot Only” remains inactive until the photographer presses the shutter button. There is also a panning mode available, which stabilizes the camera’s vertical movement. Last but not least, you can disable the picture stabilization.

Throughout our examination, the Canon PowerShot SX130 has generated photographs of satisfactory quality. The biggest shortcoming of the Canon PowerShot SX130 IS in terms of image quality is noise, with ISO 400 displaying some noise, blurring of detail, and moderate desaturation of color. As the ISO increases, noise and loss of information become increasingly noticeable until you reach the highest possible value of 1600.

The Canon PowerShot SX130 has performed admirably in handling chromatic aberrations, with only a few instances of purple fringing visible in high-contrast settings. The images captured with a resolution of 12 megapixels came out of the camera with a level of softness that required additional sharpening in an application such as Adobe Photoshop. If you want to avoid this, you should either increase the sharpening level performed in-camera or use a higher resolution.

The nighttime shot came out exceptionally well, and the maximum shutter speed was 15 seconds meant that you could catch sufficient light for almost any scenario. Even though there is a lot of lens distortion and shadows at such a short distance, the performance of the camera’s macro mode is a standout highlight, allowing you to focus as near as 1 centimeter away from the subject of your photograph. The built-in flash did a fantastic job indoors, producing images free of red-eye and with enough exposure overall. When shooting in low-light settings with the camera held by hand or utilizing the telephoto end of the zoom range, anti-shake performs well.

The Canon PowerShot SX130IS may be described as having a variety of strengths and weaknesses. Image quality and overall feature set are commensurate with the asking price and meet or exceed expectations. Not only does it include a wide-angle lens, picture stabilization, and a decent 12x optical zoom, but its HD video capabilities are pretty formidable for a tiny camera, giving you lots of creative possibilities for your movies.

Its performance is severely hindered by its poor speeds and short battery life, both of which are big drawbacks. When using conventional alkaline batteries, the Canon SX130 will not even make it through a single day of photography, let alone an entire trip’s worth. Although they can be helpful, using NiMH batteries will serve you considerably better in the long run. Regarding speed, the Canon SX130 might have a shot-to-shot lag that seems to go on forever when the flash is turned on.