The Canon SX150 IS is a superzoom camera with a resolution of 14.1 megapixels and an image-stabilized optical zoom that has a wide-ranging 12x magnification and offers an equivalent focal length range of 28-336mm. The SX150, like other more modern Canon compacts, comes with a comprehensive feature set. 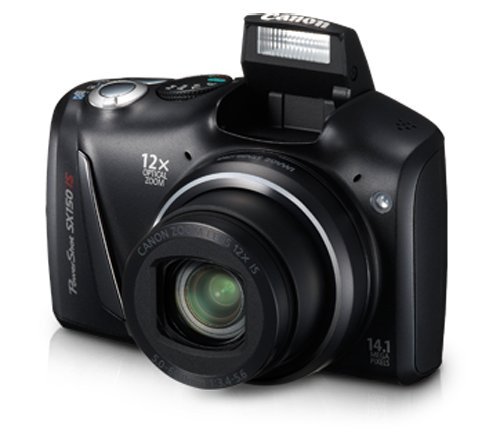 Although it is smaller and lighter than Canon’s SX40 with its 35x wide-angle zoom, the SX150 IS is somewhat hefty compared to Canon’s ELPH/IXUS cameras. However, it is offered in black or red and in both colors. When complete with batteries and an SD/SDHC/SDXC media card, it tips the scales at 306 grams (10.8 ounces). Although we wouldn’t call this a pocket camera, it is small enough to slip into more oversized pockets, such as those found on jackets and slacks. The camera is simple to use, and if you’re already familiar with the settings and menus of Canon PowerShot cameras, you’ll feel right at home. The Canon PowerShot SX150 IS has a built-in guide that explains the functions of all the menu settings. This helps make the camera a good learning tool, even if unfamiliar with the PowerShot user interface. This makes the camera useful even for people just starting with digital photography. You might also select the Easy or Auto setting and take pictures immediately.

Most of the time, the external controls are placed in an accessible and handy location and are simple to get to. A manually operated pop-up flash is located on the top deck (arguably more convenient than an auto-pop-up design). The mode dial, the shutter button/zoom, and a sizable button to turn the power on and off are all located to the right of the flash. Playback, exposure compensation, video, display, and menu buttons are located on the camera’s rear panel. Additionally, a four-way controller (which controls ISO, flash, self-timer, and manual focus/macro) may also be used as a turning dial to move through the menus.

The SX150 IS is powered by two AA batteries, which are included in the package and the camera. Because of this, the camera does not have an incredibly slim profile. However, using AA batteries comes with several drawbacks. On the one hand, AA batteries are easily accessible, so you are never too distant from a power source. The battery life of the SX150, on the other hand, is not that impressive. If you use the flash and spend a lot of time examining your photographs on the LCD, the batteries will run out of power much more quickly.

The most you can hope for from batteries, like the essential alkaline cells that come with the camera, is to obtain roughly one hundred shots from them. In addition to making appropriate use of the flash and avoiding spending excessive time going through your photos, you may slow down the rate at which your battery dies by adjusting the image stabilization option from continuous to Shoot Only and by setting autofocus to single.

When the conditions are just right, the SX150 can take photographs that are of very high quality (this camera likes good light). The exposures are typically well-balanced, except for strong highlights, which can occasionally be clipped. The colors are natural, although one of the camera’s color effects modes can be used to “punch them up.” Even while it is not completely eliminated, colored fringing around high-contrast scene objects is relatively minimal. This is especially noticeable at the frame’s outside edges.

The SX150 IS produces extremely high image quality when set to the macro mode, and the exposure in flash photographs lives up to the standards I’ve come to expect from Canon’s PowerShot range. Images taken directly from the camera are beautiful and crisp in the center of the frame at all focal lengths; however, there is a slight loss of quality at the corners of the frame, especially when the zoom is set to its most telephoto position. The level of detail acquired is sufficient for usage in tiny prints and on the web.

Noise is the SX150’s most significant shortcoming regarding the quality of its images. Its ISO range begins at 80, and following closer study, we discovered that even at ISO 100, there was some noise in the darker regions of the image. Noise and, of course, the need for noise reduction, which dulls the image’s finer details, grow in proportion to the ISO sensitivity setting. You should stick to its lower ISO sensitivity settings to get the most out of your SX150 IS. This is something that won’t affect you in tiny prints or online galleries, but if you want to get the most out of your camera, you should.

The resolution of the SX150’s high-definition video output is capped at 720p, while the solution of its standard-definition video output is 640 by 480. However, you are responsible for providing your own A/V cables, as no HDMI connector is available for connecting HDTVs. During the video recording, the zoom is active, but you will be able to hear the movement of the lens unless there is a significant amount of background noise. If there is a lot of wind, you should use the wind filter, but you shouldn’t anticipate miracles.

The video quality is decent but not exceptional, and the SX150 IS performs the best in intense light when it is set to video mode. Although we didn’t observe much of a rolling shutter effect, we occasionally ran into issues with moiré when panning across vertical fences and railings. The sound captured by the built-in mic isn’t terrible, but the zoom mechanism may occasionally be heard on the soundtracks of movies. This is because the degree of background noise affects how noticeable the sound is. One of the advantages is that you can zoom in while the film is being recorded, which hasn’t always been possible with affordable Canon compacts.

The SX150 is not the thinnest compact camera available. Still, it is comfortable and straightforward to use, and its stabilized 12X optical zoom offers impressive versatility along with good (for this class) image quality at low ISO sensitivity settings. Although it is not the most slender camera in its class, the SX150 is an excellent choice for anyone looking for a good camera. A feature set that is complete and well-rounded may accommodate the requirements of both casual photographers and those who are more experienced with manual settings (or wish to be).

This generally beautiful camera has a few severe flaws, the most notable of which are its sluggish performance and the image noise that becomes visible at middle and higher ISO levels. The SX150 IS a slow-feeling camera, except for its face detection and focusing capabilities, which are relatively speedy when there is enough light. It takes a few seconds to start up, and there is a significant delay between shots, which is especially noticeable when using the flash.

Load more
The Canon PowerShot SX150 IS is a nifty little camera that has a few fascinating features up its sleeve for users to explore. It is more comfortable to carry than some of its smaller competitors thanks to its weight and sculpted design, and the image quality is really high when taken in favorable lighting situations with low ISO settings. If you can live with the rather sluggish performance and the bad battery life, this is a terrific camera to take "anywhere," thanks to its adaptable lens and powerful image stabilization technology. However, the battery life is not very good.Canon PowerShot SX150 IS Review