The Canon PowerShot SX230 HS is a new travel zoom camera that will replace the previous model, the SX210. There is a 14x, 28-392mm optical zoom lens with an integrated image stabilizer, a 12.1 megapixel back-illuminated CMOS sensor, a 3-inch LCD screen with 460k-dot resolution, a DIGIC 4 image-processing engine, a full 1080p HD Movie Mode with stereo sound and an HDMI output, as well as a Smart Auto mode with Scene Detection Technology and an Easy mode for beginners. The only difference between the Canon SX230 and SX220 models is the addition of a built-in GPS in the Canon SX230 HS.

Additionally, the Canon SX230 HS features a full range of manual exposure modes, 8.1 frames per second of burst shooting at a resolution of 3 megapixels, a Super Slow Motion Movie mode, and a burst shooting speed of 3 megapixels. The Canon PowerShot SX230 can be purchased for a total of £299, equivalent to $349.99, and it comes in either pink, blue, or black. 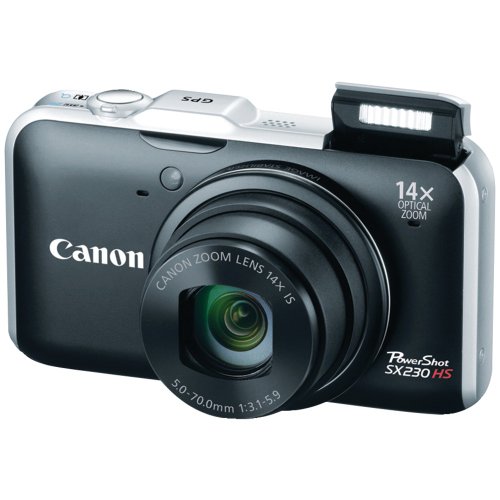 The Canon SX230 HS features a lens with 14x optical zoom and a 35mm equivalent focal length range of 28-392mm (actual zoom range 5-70mm). The lens may be extended away from the body, even though it still leaves a very slight projection from the body even when the device is turned off. The lens has a maximum aperture range of f/3.1-5.9 and a minimum aperture that remains constant at f/8.0 across the whole length of the zoom. The lens also features optical image stabilization, enabling somewhat crisper photographs to be produced even in low-light environments.

The Canon SX230 HS employs a CMOS image sensor that is a typical 1/2.3-inch size and has a total megapixel count of 12.8. However, the final image is cropped to an adequate length of 12.1 megapixels, which places the SX230 approximately in the center of the pack compared to its current (2011) competitors.

The Canon SX230 HS does not include a viewfinder of any type and instead relies on the 3-inch LCD on the back of the camera. This LCD has a resolution of roughly 460k dots. Because the LCD has an aspect ratio closer to 16:9 than the camera’s original 4:3, you will see black bars along the edges of your live view screen by default. This is similar to how other current Canon models’ LCDs are designed. This keeps the different shooting setting readouts off the image, which helps in framing, but as a result, there is less screen real estate dedicated to your image than there is with cameras that feature a 4:3 3-inch LCD.

On the Canon SX230 HS, you’ll find a conventional USB/AV port and a mini-HDMI port. The USB port has a slight hump to fit Canon’s AVC-DC400ST A/V cable, and the mini-HDMI port is more minor. The Canon SX230 HS, on the other hand, is compatible with regular mini-USB connections for the transfer of data to and from the camera. One problem we encountered was that when we tried to connect the SX230 HS straight to a Macbook, the computer would not recognize the Canon’s presence at all. Because of this, we needed to use a card reader. However, it functioned well when I used the camera on a Windows computer.

Even though it has a 14x zoom, we’ve found that lengthier lenses tend to lower the overall image quality. This pattern is continued by the SX230, which produces grainy, off-color, and distorted images in most shooting situations.

The SX230 HS produced detail levels that were above average; however, depending on the focal length that was being used, our findings were all over the place. At times, sharpness reached over 2200 MTF50s, which is pretty impressive; nevertheless, detail decreased below 800 MTF50s at longer focal lengths and in areas closer to the edge of the frame. In addition, there is a propensity for the edges to get oversharpened, which detracts from the realism of the exposures.

When zoomed in, there is a significant amount of blurriness. In the big scheme of things, even the image that has been stabilized will not be particularly appealing, even though the optical stabilizer of the SX230 will produce a relative increase in sharpness. The results of our experiment are based on percentages of improvement; this stabilizer does raise the level of detail by an average of 52 percent.

Regarding the precise reproduction of colors, Canon cameras often have a mixed track record, and the SX230 falls into the latter category. Even with a more miniature camera, the best we could get was a value of 3.82 for our margin of error, which is far worse than the norm. Particularly wrong were the flesh tones, with many different colors of yellow being green instead—a further discussion on how we evaluate color.

Due to how computer monitors portray colors, the photos that have been displayed above may not exactly match the originals that can be seen on the chart or in the photographs that have been collected. It is important to remember that the graph is meant to be used for judging the relative color change, not the absolute colors collected.

The primary way in which the Canon PowerShot SX230 HS is an improvement over its predecessor, the SX210 model, is that it provides a more significant number of features at a lower cost.

The effective built-in GPS distinguishes the SX230 from the SX220 HS model, which is slightly less expensive but identical in every other respect.

In particular, the addition of full 1080p HD movies makes the new SX230 a more than capable all-in-one camera for both still images and video.

This model undoubtedly achieves a decent mix in price and performance since it is £60 cheaper than the SX210 when it was first released while also being £30 more expensive than its younger brother, the SX230 HS. This model can be found here.