The PowerShot SX260 HS, which retails for $349, is Canon’s most recent offering in compact travel zoom cameras. The SX260 is the successor to the SX230, one of my go-to travel zooms from the previous year. Its most notable improvement is a zoom lens that is both broader and more powerful. Several other aspects of the camera, including its image processor, image stabilization system, Smart Auto mode, and burst mode performance, have also been enhanced. The SX260 is identical to its predecessor in terms of its 12.1 Megapixel CMOS sensor, 3-inch LCD, GPS receiver, and Full HD video mode. 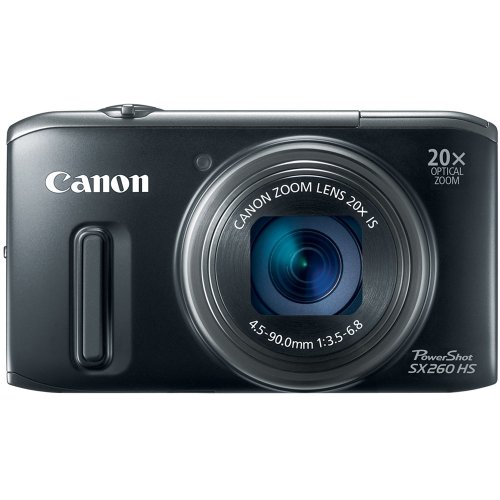 As is the case with all of Canon’s most recent cameras, the company does not incorporate memory within its cameras, nor does it offer a memory card in the packaging for its cameras. Therefore, if you do not currently own an SD, SDHC, or SDXC card (which is most likely), you will need to go out and purchase one as soon as possible. You’ll want a memory card with at least 4 gigabytes of storage space, preferably more if you intend to record a lot of films in full high definition. For the most outstanding performance, it is advised that you use a card with a high speed (Class 6 or higher).

Canon’s software bundle is consistently among the industry’s most impressive offerings. You will initially run into CameraWindow, the application that will download photographs from the camera onto your computer or Mac. On Windows computers, the primary picture organizing suite is ZoomBrowser; on Macs, it is known as ImageBrowser.

The program allows you to edit images, e-mail or print them, submit films to YouTube, and do some basic editing. Some functions available for editing photos are cropping, removing red-eye, adjusting the level and tone curve, and color tuning. Some tools for editing movies included in Image/ZoomBrowser include trimming, and frame captures.

In addition to the PowerShot SX260 HS camera, Canon includes PhotoStitch and Map Utility in the retail packaging for this model. Using the camera’s built-in Stitch Assist function, you may line up multiple shots to be stitched together into a single panoramic image with the help of the PhotoStitch program. Map Utility will point up exactly where photographs with integrated GPS data are located on a Google Map. You will also be able to view the path that you traveled if you have the logging feature enabled when you are traveling.

The user manual for the SX260 is identical to that provided for all other Canon PowerShot models. A pamphlet that will help you get up and running may be found inside the package. You’ll need to open the full manual, which is included on a CD-ROM in a PDF format for your convenience, to access any more information. Even though this manual is not the most user-pleasant reference available, it will answer any questions regarding the SX260. Your Mac or PC will be provided with instructions for the software that was packaged with the product.

The predecessor, the PowerShot SX230, has been succeeded by the PowerShot SX260 HS, which is a more streamlined version of the SX230. The camera is nearly entirely constructed of metal, and the device’s construction gives the impression that it is highly sturdy. Even though there is not much area for your thumb on the back of the camera, it is still comfortable to grip due to its small size. My thumb often rests on the button that records movies. The buttons on the back of the camera are flush with the body, making it impossible to know what you are pushing unless you glance at the screen first. This is another thing that bothers me about the camera.

The stereo microphones, speaker, and flash are all located on the very top of the Canon PowerShot SX260. As a result of the GPS being integrated into the body of the SX260, the “hump” that was present on its predecessor has been eliminated. On the rear of the SX260, you will see that it does not have the widescreen LCD that its forerunner did (this is something that I consider to be a positive change), and the buttons have been redesigned to have the flush design that I stated before. The power button used to be located on the rear of the SX230, but it has been moved to the top of the SX260. This is another significant change.

The SX260 has a three-inch LCD, the most notable characteristic of the camera’s rear. Instead of having a widescreen aspect ratio like the one on the SX230, the LCD now has the more conventional 4:3 aspect ratio. This is fantastic news for photographers who take stills, as arranging photographs on a 16:9 monitor may be challenging. The LCD has a resolution of 461,000 pixels, the same as its predecessor, and it has excellent visibility even when used outside. The screen will brighten up wonderfully when there is little light, making it easier to view the subject of the shot you are attempting to snap.

The new 20X lens is the most significant upgrade to the SX260 since it was first released. You shouldn’t expect this F3.5-6.8 lens to do miracles in low light because it isn’t a “quick” lens, particularly at the telephoto end. The focal length ranges from 4.5 to 90.0 millimeters, which translates to 25 to 500 millimeters. Because the lens does not have a threaded barrel, it is impossible to attach conversion lenses or filters. The pop-up flash of the camera may be found to the top left of the lens; it is raised and lowered electrically (depending on the flash setting). The flash has a working range of 0.5 to 3.5 meters when used at wide-angle and 1.0 to 2.0 meters at telephoto (both at Auto ISO).

Consider purchasing the slave flash that I mentioned previously. It has a range of up to 30 feet and can give you more flash power if you like. In addition, the AF-assist bulb is located on the front of the camera, doubling as a visual countdown for the self-timer. The mode dial, which can be found in the top-right corner, features many different settings. I’ll go into further detail regarding those many possibilities on the following page of this evaluation. Below, we have four buttons and the combination four-way controller and scroll wheel.

It is straightforward to deduce what each of the four buttons is intended to achieve, and as you can see, the four-way controller is capable of much more than just navigating menus. Adjusting the manual settings and browsing the menu system may be done with the scroll dial located around the four-way controller. Moving farther to the right, we get to the shutter release button, which has the zoom controller around it.

In only one minute and ninety-nine hundredths of a second, the controller changes the lens’s focal length from wide-angle to telephoto. I counted a little over twenty steps in the 20X zoom range of the SX260, which does not allow for a great deal of precision.

You’ll find the slots for an SD memory card and the slimline NB-6L lithium-ion battery with the camera on the bottom of the SX260 HS. Both of these components are included with the camera.

The I/O ports of the SX260 are on the right side of the device and shielded by a rubber cover. The ports available here include USB as well as A/V and mini-HDMI. The battery compartment door features a “hole” as an access point for the optional AC adaptor. The battery compartment and the memory card slot are both located on the underside of the PowerShot SX260, which also features a metal tripod mount. The door that covers this compartment is of ordinary quality. Remember that when the camera is mounted on a tripod, you won’t be able to access the device’s contents.

The Canon PowerShot SX260 HS is capable of producing photographs of exceptionally high quality. At ISO 100, 200, and 400, it captured photos with no noise; however, at ISO 800, it captured images with considerable noise and a minor loss of color saturation. While ISO 1600 exhibits more noticeable noise and a loss of color, the setting is still completely acceptable. Even the highest possible ISO 3200 does not suffer too severely from the effect.

Chromatic aberrations were handled competently by the Canon PowerShot SX260 HS, with the camera displaying a small number of purple fringing effects in high-contrast conditions and typically towards the frame’s borders. The built-in flash did a fantastic job indoors, producing images free of red-eye and with enough exposure overall. The night snapshot turned out wonderfully, and the maximum shutter speed of 15 seconds was more than adequate for most shots taken after dark.

When shooting in low-light settings with the camera held by hand or utilizing the telephoto end of the zoom range, anti-shake performs well. The macro performance is relatively strong, letting you focus on the topic from a distance as near as 5 centimeters.

When the default sharpening level was used, the photographs were soft right out of the Canon PowerShot SX260 HS. For the best results, you should do further sharpening in an application such as Adobe Photoshop; alternatively, you may modify the setting directly within the camera.

The Canon PowerShot SX260 is a travel zoom camera that is both sleek and small, and it features a lens with a magnification factor of 20 times. With an excellent focal length range of 25–500 mm, the lens is likely the most stunning component of the camera. The lens is sluggish, especially when it is set to its maximum telephoto, which is typical for cameras in this class.

The SX260 possesses an optical image stabilization system, which comes replete with a dynamic model for recording movies and a powered mode for use when taking telephoto photographs. Your camera will automatically select the most appropriate IS mode for the shooting conditions, allowing you to concentrate on your subject rather than fiddling with the camera settings. The LCD screen measures 3 inches and is located on the camera’s rear.