A new low-cost superzoom camera from Canon, the PowerShot SX430 IS, has been released. The Canon SX430 IS has a CMOS sensor with a resolution of 20.5 megapixels and a 45x optical zoom lens, which translates to a focal length range of 24-1080mm when measured in terms of 35mm film. Other essential features include networking by Wi-Fi and Dynamic NFC, movie recording at 720p resolution, and a clever Image Stabilizer for both still images and video. 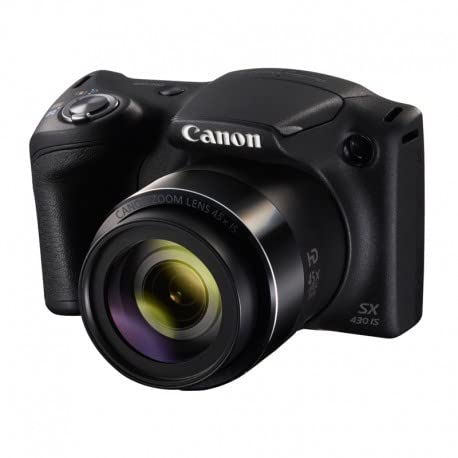 The Canon PowerShot SX430 IS, which was first introduced in February and has just recently become available, is a camera that resembles a consumer-grade SLR (or an enthusiast-level super zoom), but one that has been conveniently shrunk in the wash. It has a whopping yet impressively compact 45x optical reach, which is strapped to the front of a camera and looks like it has been shrunk in the wash. In our opinion, at least, the Canon PowerShot S

When you look at the press images of this camera before you get your hands on it, it may be pretty tricky to get an accurate sense of how little it is.

We could only get two of our adult-sized fingers within its handgrip, which left our forefinger hanging over the conveniently located shutter release button at the handgrip’s topmost edge, which was surrounded by the lever for adjusting the zoom.

While it is feasible to control the camera with just one hand (your right), you should use your left hand to hold the lightweight zoom. This will assist in maintaining the body of the camera (and your horizons) level and stability while you shoot.

Even though it would be challenging to fit the SX430 IS (which stands for “image stabilized”) into a trouser pocket due to its prominent lens barrel, which offers a maximum aperture of f/3.5 and a much more eye-catching massive 24-1080mm equivalent reach in terms of 35mm film, the camera will fit comfortably into any jacket or, for those traveling types on a weekend city break, a small rucksack or shoulder bag.

The camera performs quite well when using the Canon PowerShot SX430 IS during daylight hours. We get the impression that we are getting a lot of bang for our money regarding the amount of zoom power it offers.

And while shooting in stated daylight situations, it is conceivable to shoot handheld with the Canon and acquire sufficient clarity in our photographs, both at the broadest possible angle and the greatest possible zoom, to produce outcomes worthy of being kept.

When we were shooting handheld and using the rear LCD to compose our shots toward the furthest extremities of the zoom, the image relayed to the rear plate LCD screen moved around quite a bit. As a result, we had to make an effort to press the shutter button as soon as we saw the framing we wanted on the screen. As we mentioned in the main body of this write-up, this caused the image to jump around quite a bit.

To our good fortune, the camera’s autofocus is sensitive enough to allow us to achieve the necessary components in this circumstance.

Despite this, the sensor is somewhat tiny, and its resolution is just slightly over average. How well does it perform, then? In a general sense, quite satisfactorily. We did observe some purple pixel fringing between places with high contrast; however, this was only genuinely noticeable when we zoomed in to check out the finer details.

Again, this is something that is only obvious if you are actively seeking it in the corners of the frame, even though there may be some loss of clarity in certain areas. The performance of the Canon PowerShot SX430 IS, on the other hand, is not very impressive while working in low light; nevertheless, that is not why its target audience will be purchasing it.

Since we found that photographs began to blur at an ISO of 800, it is best to keep the camera set to an ISO of 400 whenever possible. This implies that photography may be done on cloudy days but not during all-night parties.

If you’re looking for a flexible, long-zoom travel camera, the PowerShot SX740 HS doesn’t disappoint, but neither will it astonish you. It performs everything very well, but besides the wide zoom range, there’s little to be excited about. Performance is perfect, but a contemporary top-end camera phone will trounce it for wide-angle image quality. Although in fairness, the latter applies to any modern small-sensor compact camera. While there may still be ‘new’ travel cameras like the SX740 HS being introduced, most are marginally refurbished versions of earlier cameras and are based on aging core technology.

Canon isn’t pushing the boundaries here, even from the perspective of tiny competitor cameras. The removal of a touch-sensitive screen hurts when cameras like the Nikon Coolpix A1000 do have this. The Canon’s lack of raw picture recording and an electronic viewfinder also appears poor on paper. Still, we recognize many consumers are unlikely to acquire a camera like this to shoot raw, and electronic viewfinders in this sector are more of a token marketing addition than a really useful feature.