The bridge area of the compact camera market is one part of the market that is still doing well in what is otherwise a declining segment.

Manufacturers are packing larger and larger zooms onto these cameras which, for many, act as an alternative to a DSLR, or a step up from a standard compact camera. 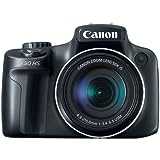 The Canon Powershot SX50 HS is styled very much akin to a miniature DSLR, with a pronounced handgrip, electronic viewfinder, hotshoe and mode dial. It’s also relatively heavy, giving the same kind of feeling as an entry-level DSLR with the kit lens attached, such as the Canon 1100D. But of course, the lens that is attached is far more flexible than a standard 18-55mm kit lens, with its 50x optical zoom. Unlike a DSLR, this is controlled via a switch around the shutter release button on top of the camera, rather than by manually twisting the zoom by hand.

Zooming in and out is quick plus smooth, meaning you can quickly go from the fully wide angle right up to the full telephoto with the minimum of effort. Thanks to the large hand grip, the camera feels very secure in the hands, making it easy to use when shooting one-handed – even when extending the entire range of the zoom. Anyone familiar with Canon’s selection of DSLRs will recognise the mode dial at the top of the camera. Here you’ll find access to full manual, semi-automatic, automatic, scene, movie and creative effect modes.

When using aperture/shutter priority, to change shutter speed or aperture, rather than using a dial on the grip, as you might do a DSLR, the wheel about the back of the camera must be used. If capturing in fully manual, it is possible to switch between shutter velocity and aperture by pressing up on the control pad. The Canon SX50 HS features a fully articulating, 2.8-inch PureColor II 461k dot LCD screen. It’s a bright and clear display, avoiding glare and reflections in a variety of lighting conditions. We’ve been unable to test it in the brightest of sunlight to fully assess that, though.

Having an articulated screen is very useful because it gives that extra flexibility when shooting at awkward angles. A small pop-up flash can be found near the top of the digital camera, which needs to be raised manually. There’s a button at the side of the flash which is used to access different flash modes once the flash is raised. It can take a lot of jabbing at the button to realise that it doesn’t raise the flash automatically.

You can either elect to have the camera decide autofocus points for you, or choose a singular point. This is achieved by pushing a dedicated switch on the trunk of the camera, then using either the arrow keys or the scroll wheel on the back of the digital camera to move the autofocus point into the correct position. An electronic viewfinder is included on the Canon PowerShot SX50 HS. Unfortunately there’s no eye sensor to automatically detect when your eye is lifted to the EVF, so you will need to hit the display button twice to switch it on.

This slows down the image taking process somewhat, and is a shame on a camera with an otherwise great specification. Next to the thumb grip on the trunk of the camera is a dedicated key to activate Full HD video recording. That is particularly handy and can be utilized even though the camera is not in video setting, which really speeds up capturing the moment as it unfolds in front of you.

We were pleased with the image performance from the Canon PowerShot SX40 HS, and given that the Canon PowerShot SX50 HS contains the same processor and 12.1 million pixel sensor, we were hopeful that picture quality would match up. Happily, we’re pleased to report that images from this camera are also very pleasing. There are bags of detail, especially for a sensor this small, making it a great option for a wide variety of different subjects.

It’s also relatively easy to achieve attractive shallow depth of field effects with the camera, though it would have been nice to see a wider maximum aperture, such as the f/2.8 constant aperture found on the Panasonic FZ200. Colours are represented well in images straight from the camera. There’s plenty of vibrancy and brightness, without it being over the top.

The addition of a Digic 5 processor was big news for this camera’s predecessor, and here it continues to deliver reduced noise levels. Images remain usable throughout the range to ISO 1600, only beginning to drop off in quality at ISO 3200, but we even found these looked acceptable.

There are some examples of image smoothing when zooming into the images at 100%, but certainly nothing which would be noticeable at normal printing or web sizes.

Digic 5 also helps to facilitate a high shooting rate, with the option to shoot at up to 10.3fps for up to eight frames at a time (when shooting JPEG only). This is a real boon when you’re photographing fast moving subjects, such as children or animals, and is great to see in a bridge digital camera.

Autofocus does a good all-round job of locking onto topics quickly and accurately, even when the lens is at the furthest reach of the zoom length. Of course, perhaps the biggest draw of this camera is its 50x optical zoom, making it the longest get to currently available on the market. Generally speaking, image stabilisation does a very good work of preventing picture blur, but at the furthest reach of the optical telephoto end of the lens, you will need a steady hand.

If you can steady it, either with a dedicated tripod or just via a nearby wall, table or other surface, then it’s a fantastic bonus to have while travelling or taking nature shots. Because even the slightest of movements can dramatically alter the composition when holding the camera at 100x or 200x its reach, it’s only really possible to use when the camera is secured in position. The digital zoom on the digital camera boasts its reach up to 100x, or 200x when engaging the very furthest achieve. At 100x, the images remain surprisingly good, and while they’re not on par with what an optical zoom could deliver, it’s useful to have if you need it. As is to be expected, image quality drops at 200x quite significantly.

This means that the resulting images should only really be used at the smallest web sizes. Again though, it is a nice to possess feature, rather than a necessity, and one that probably won’t be utilized all too frequently. As with the Canon SX40, there are a few art filters to experiment with on the Canon SX50. Unfortunately you can’t shoot these while using raw format, so if you decide you don’t like the filter later in post-production, you won’t be able to remove it.

Some of the filters are better than others, as you might expect, but it’s good to have a few different options to try out, while some of them are customisable, meaning you can achieve different results. You can choose to compose your pictures on the articulating LCD screen, or the electronic viewfinder. The LCD screen is bright and clear, and isn’t marred by glare or reflections, except in possibly the brightest sunlight. Having the ability to articulate is also very handy when you want to shoot from a difficult angle.

There have been some fantastic advancements in electronic viewfinder technology, with many cameras now boasting fantastic devices that are really useable. Regrettably, the Canon SX50 is not one of those cameras. Composing an image using the EVF is made difficult by the small size of the display. Although the little scroll dial at the side of the EVF can be used to adjust the sharpness of the display screen, it’s still tricky to use, especially in brighter conditions.

What we’ve got here is good image quality, lots of features, an attractive body and plenty to appeal to a wide variety of photographers. While it’s true that the Panasonic FZ200 offers a better maximum aperture value, of f/2.8 throughout its entire range, this camera boasts a whopping 50x optical zoom – something you won’t get anywhere else.

For anybody looking to purchase a bridge camera this year, the Canon SX50 is easily one of the best options currently available on the market. An articulating screen, raw format shooting and of course that giant zoom all add to a fantastic package in a neat little body. It’s just a shame about the EVF, though.