The Canon PowerShot SD500, also known as the Digital Ixus 700 in Europe and the IXY DIGITAL 600 in Japan, was introduced right before PMA in February 2005. It is the most recent model in a long line of ultra-compact ‘ELPH’ or ‘IXUS’ cameras that date back to the early 2000s (and a lot farther back than that in the film camera world).

The SD500, which has a resolution of 7 megapixels and is somewhat broader and curvier than its predecessors, has replaced the S500 (IXUS 500) as the flagship model of the line; it is also around 8 percent lighter than that model.

A redesigned mode dial, quicker USB 2.0 connectivity, more excellent performance owing to the DIGIC II processor, and upgraded movie capabilities are some of the other modifications that have been made. Many of these enhancements can also be found in the new SD400.

The SD500, much like its predecessors, does not have a tremendous much in the way of manual controls, but it does manage to pack quite a few high-end capabilities into the compact all-metal housing it comes in. 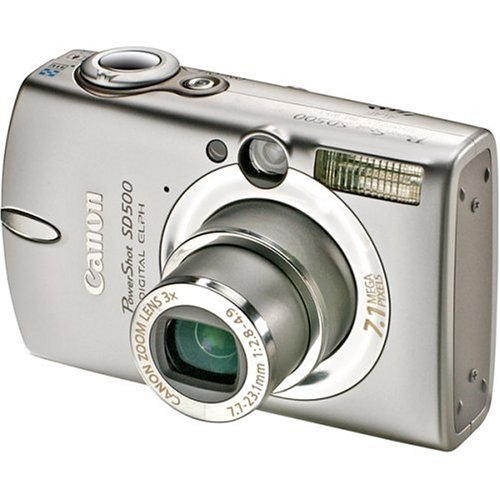 This translates into the SD500, having a pleasingly rounded left-hand side and an apparent absence of sharp edges. As befits a camera that is located at the higher end of the price range for ultra-compact cameras, it is beautifully built with admirable attention to detail. The SD500 has a silky stainless steel finish that is almost indulgently tactile, and its looks and feel exude quality. The SD500 also has an optical viewfinder.

The main drawback of the selected finish is that it appears prone to scratches and other types of blemishes (so keep it in a case when not in use). I also found the camera to be a touch on the “slippy” side, which meant that I felt a lot safer with the wrist strap in place than without it. But, again, I think this is because of how the camera is designed.

Although the control arrangement has been significantly modified (there is now a mode dial rather than a switch, and the majority of the buttons have shifted), the fundamentals remain the same as in most of the other models in the series.

This ensures you can access external controls for metering, flash, focus (macro or infinity), and self-timer/drive mode. On the other hand, the excellent FUNC menu is used to access the rest of the camera’s features.

The pebble-smooth shell, along with the lack of any apparent ‘grip,’ means that it can seem a bit difficult to handle in one hand but is, in reality, completely useable. The SD500 weighs around 194 grams when filled, which is just substantial enough to feel solid and sturdy in hand.

The placement of the shutter release and the zoom rocker makes operation with one hand simple; nevertheless, you should still ensure that the strap is wrapped around your wrist if the camera escapes your grasp and begins to move in the wrong direction.

And this is not without good reason; the combination of great external controls and the superb ‘FUNC’ menu, which offers single-screen access to virtually every other aspect of the camera’s operation, makes mastering a PowerShot simple and using it remarkably fluid, making it one of the most popular digital cameras on the market today.

This is a straightforward camera, a “point-and-shoot” type that offers extremely little control over the manual settings. What you do get, however, is control over the majority of the critical stages, including metering, flash, ISO, white balance, file size and quality, and so on.

What you do not receive, however, is any significant control over the apertures and shutter speeds of the camera, except a small selection of subject modes.

Even if you switch the camera off, it will keep the custom white balance setting that you have previously selected. When usually shooting outside, the auto white balance serves its purpose admirably (as confirmed by our studio tests).

Fluorescent illumination doesn’t pose much of an issue indoors, but incandescent (tungsten) lighting produces a solid orange color cast. This is something that we’ve experienced with the majority of Canon PowerShots.

If you want the colors to be more muted, it is best to remain with the preset (or use the one-push custom WB). When we asked Canon about its method of determining the white balance, we were told that the warm colors that appear on the camera’s display when it is shooting in incandescent light are deliberate and are done so to “try to keep some of the warm atmospheres of this kind of shot.” This information was conveyed to us after we contacted the company.

The flash performed well in our real-world tests, with almost no color cast but a slight tendency to underexpose (which is easy to fix and much better than burnt-out results). Additionally, some issues seemed connected to the choice of focus point when using the auto-focus mode, but these were quickly resolved.

Even with the red-eye reduction feature activated, the flash has a very short recycle time, ensuring you won’t miss any spontaneous photo opportunities. At the same time, you wait for it to fire. In addition, we discovered that the autofocus (AF) illuminator would enable focus in total darkness (or as close to it as possible) at distances of up to approximately one meter. When the light levels are poor, the autofocus assist illuminator can help you focus at distances of up to around two meters.

The macro mode of the SD500 is most effective at the broad end of the zoom, as is the case with most tiny digital cameras. At this end of the zoom range, you can get as near as 5 centimeters, which is not terrible for an “ultra-compact” camera. Even if the performance is less outstanding at the long end of the zoom (with a subject distance of 30 centimeters), it is still rather handy.

Regarding picture quality, an ultra-compact camera like this would inevitably involve some sacrifice on the user’s part.

First, the good news: this is a Canon, and it has all of the typical Canon hallmarks, including unique color that is both bright and natural, exact exposure and focus, and a very high level of detail (see resolution tests).

The photographs, particularly those containing delicate low-contrast detail such as foliage, sometimes appear soft or muddy (they are very smooth, almost too ‘polished’). Still, they react well to sharpening and print nicely when they are. Likewise, the information in areas of higher contrast is portrayed fairly crisply, although extraordinarily bright and contrasty situations can wreak havoc on the metering.

We noticed that corner softness was a minor issue at the wide end of the zoom range and maximum aperture. Still, it is much better than in prior generations, and it isn’t particularly noticeable in images taken in real-world environments. On the other hand, we also discovered that the typical Achilles heel of Canon-Kameras, purple fringing, was a severe problem in most high-contrast photos we took.

Ultimately, the SD500 produces results that very few people in the target market would find anything to complain about. On the contrary, it would make the ideal ‘always carry’ camera for anyone who ordinarily uses a larger, more sophisticated camera but doesn’t want to sacrifice too much image quality for portability.

There is noticeable purple fringing in all of the photographs with very bright regions, particularly those overexposed. In several of the pictures, it is powerful.

In most situations, it is not enough to ruin photographs, but when shooting with a wide-angle lens outside on a sunny day, you may end up with extreme fringes at the edges of the frame where bright and dark areas meet.

We discovered that extremely bright environments could occasionally result in major exposure difficulties (significant over-exposure). Even though the default contrast curve looks relatively steep, the dynamic range appears pretty decent. However, it would be best to get the exposure right to keep the information in the highlights and shadows.

The issue, as with other ‘intelligent’ multi-point AF systems, is that the camera will frequently choose a small foreground item to focus on. However, this can be readily avoided by observing the focus point being used (or sticking to a single-point focus).

It is not without good cause that the IXUS and Elph series has proven to be so popular; the mix of size, design and materials, performance, and reasonable image quality is appealing. The SD500 is no exception; it is quick, simple to use, and able to provide first-class results in the appropriate settings; in short, it has all the markers of a design classic, and it is no exception. But, unfortunately, it is not a camera that is devoid of issues. Some, such as the somewhat erratic behavior of the AiAF “intelligent” focus system, can be easily overcome (switch to center focus). In contrast, others, such as the SD500’s tendency to miss fine low-contrast detail, will only cause a problem if you print at sizes greater than 8×10 inches.

In the end, however, purchasing any camera designed to be as physically small as possible will always represent a compromise. I think the SD500 represents an acceptable trade-off on balance. It can produce sharper, more detailed results than most of its competitors, and its street price is pretty competitive at less than $500.

You may wonder whether you need a pocket camera with 7 million pixels. Still, the test results show that the SD500 can capture more detail in everyday scenes than any of its predecessors or competitors with 4 or 5 megapixels. This is especially true when shooting in low-light conditions. So even if it is hardly a revolutionary step forward, the SD500 will offer you the upper hand if you choose to print a little larger than usual.

The SD500 is a terrific small camera, but I had the impression that it didn’t quite live up to its promise. Perhaps I judged it too harshly. We did not experience any of the movie audio difficulties (a slight whine or hiss) that were described by some owners (and were, in fact, extremely pleased by the movie mode), and the results are frequently breathtaking when there is sufficient light and a lot of contrast.