The XF series of cameras from Canon has always been an excellent choice for workhorse cameras because of its form factor, which consists of a fixed lens and many buttons. The way they compressed the footage at high rates with open-source codecs and then saved the resulting MXF files on excellent, publicly available, and reasonably inexpensive media — SD cards in this case as opposed to CompactFlash – was something that we really appreciated.

The most recent version is the XF705, which comes with enhancements that are entirely foreseeable but are, all the same, astounding. You may now record UHD content to SD cards in 4:2:2 10-bit and 3840 by 2160 at 50 frames per second if you use the XF-HEVC codec. 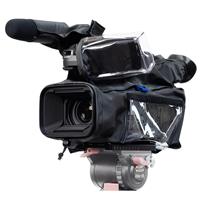 Using the two SD card ports on the side of the body and the 160Mbps setting, our 64GB Lexar cards provided us with around 110 minutes of 4K recording time.

If you are not yet ready for 4K Ultra High Definition, you may still shoot with Canon’s XF-AVC codec; however, the resolution and quality will be reduced to HD with a 4:2:0 8-bit output. It is quite unlikely that you will use XF-AVC given that the HEVC option provides support for 1920 by 1080. The only possible explanation for this would be if your NLE was unable of working with the latest HEVC codec, which might initially present some difficulties.

Canon employs a 1.0-type CMOS sensor and a DIGIC DV6 processor to handle the additional processing that is required for the significant increase in resolution as well as any other processing that is data-intensive. The body also contains many huge air vents to keep things cool, although because the model we tested was a pre-production version, this feature may or may not be available when you get yours.

It might be argued that with this new 1.0-type sensor, you have the ability to begin playing with depth-of-field to some degree. This is especially true when you utilize the touchscreen on the display to focus, which is another item that can be checked off the list. You may also think about using the XF705 as a potential backup camera for some of the cameras with bigger sensors.

In addition to that, there is five-axis image stabilization, which includes the well-known Powered IS mode, which attempts to replicate a tripod mode and does a fairly excellent job of it. This excellent L lens possesses three separate control rings, each of which is equipped with end stops, which enables the camcorder to have a respectable amount of manual control.

This lens is one of the genuinely striking characteristics of the XF705, and Canon, as it has done in the past, solicited the input of broadcasters and cinematographers throughout the design process for this camera. The handling of the lens is where this is most readily apparent. The focus ring features a calibrated scale as well as end stops, allowing it to function as a genuine manual control.

However, if you push a button and spin the lens barrel behind the focusing ring, the calibrated scale will vanish, and the focusing ring will change into an ‘endless encoder’, allowing you to manually focus as well as use the auto-focus feature. There is a straightforward slider control located just beneath the lens ring, which may be utilized in its place if you choose to use it as a zoom ring.

While we’re on the topic of autofocus, I should point out that the XF705 has Canon’s incredible, beautiful, and one-of-a-kind Dual Pixel autofocus. This approach is so amazing that it has convinced many photographers who are opposed to using autofocus to adopt it.

This allows for normal precise and quick autofocus on the XF705, along with face-detection AF and object tracking capabilities. Touch focus control is also available. When you make modifications manually, you not only get guidance but also a graphical guide to support precise focusing.

Not even the lens adjustments are the only things that have been meticulously examined. There is a generous supply of specialized buttons for zebra, peaking, picture stabilization, and other such functions, all of which are conveniently located and make sense. In addition, you will receive a motor-driven neutral density (ND) filter that comes with three different densities: ND 1/4, ND 1/16, and ND 1/64.

Because Canon has so many years of experience with this form factor, the hands-on control is exactly as you would expect it to be, with everything being just where it should be: at your fingers. On the top, in close proximity to the display, and on the fixed grip are a few record controls that are similar to one another.

It is possible to mount the monitor on either the left or the right side of the camera, and it features a tilt-and-slide action that allows you to change it around or even put it away, similar to the Panasonic AG-DVX200.

A magnification button is located next to the rocker switch, and the media controls as well as the built-in microphones are located on the top of the device. There are two XLRs accessible, with Input 1 located closer to the lens and Input 2 situated further toward the back. It’s possible that this is caused by all of the additional connections that are crammed onto the rear of the camera.

Included in the package is the 12G-SDI, which has a bandwidth that is four times more than that of the 3G-SDI and will enable 4K IP streaming over a single cable due to a convenient onboard ethernet connection. This type of camera is extremely new on the market. The camera also comes equipped with Wi-Fi for streaming video at a lesser resolution.

The XF705 is able to Livestream video through the use of IP transmission, and the video may be encoded using either the H.265/HEVC or the H.264/AVC codec. Data in either 4K Ultra High Definition or Full HD may be effectively sent to a range of systems using live H.265 streams operating at 16 Mbps and 59.94 frames per second. In addition, there are ports for HDMI, timecode, and headphones on the rear of the device.

However, the manner in which Canon incorporated HDR into the shooting settings is arguably the aspect of the XF705 that stands out the most. You now have the option of using anything from BT. 709 all the way up to HLG, PQ, and Canon Log 3 as presets.

It’s also important to note that the XF705 is the first camera in the XF series to offer support for Canon Log 3, which it does for the first time. This function gives a dynamic range of 13 stops, which helps smooth out the mid-tones and keep the details in the shadows intact.

“Many a manual focus purist has been converted into an autofocus enthusiast as a direct result of the Dual Pixel AF.”

A camera that can do everything, with the added benefits of a long and quick zoom, high bitrate 4K output, streaming technology that is simple to use, and immediate HDR film.

You won’t be able to get a depth-of-field that is as shallow as a wafer with a 1.0-type sensor, but you will be able to achieve nice bokeh and, of course, a very contemporary and high-resolution camcorder that is excellent for shooting run-and-gun footage, documentaries, or event coverage.

When utilized for the first time, the Dual Pixel AF will blow your mind. This is especially true if you’ve never tried it before. It has converted a good number of traditionalists who were advocates of manual focus into advocates of autofocus.

It is not inexpensive, coming in at £6999, but it is a sturdy workhorse that is packed with the most recent technologies and ought to offer excellent service for many years. One minor drawback is the frame rate, which only provides half the normal pace at 50 or 60 frames per second when several competitors provide 100 or 120 frames per second.

However, it is one of the first professional cameras to provide the H.265 codec, which reduces the amount of space required for 4K recordings. Additionally, it has HDR choices built in, which means that you will be somewhat protected from technological change as these formats gain in popularity.