There is no getting around the fact that the Canon XA10 is quite probably the most compact professional camcorder that has ever been brought to our attention. 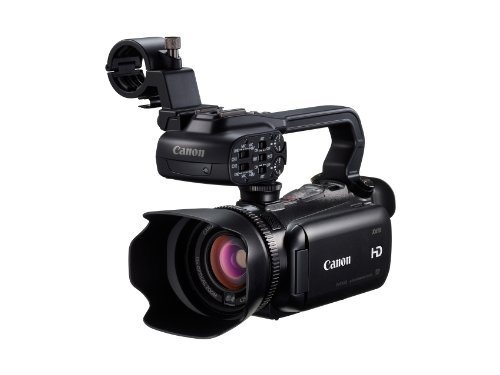 It became immediately apparent that the XA10 does not follow the same standards as other professional camcorders, which are characterized by having bigger form factors and a greater number of buttons located on the exterior of the camera.

Although the XA10’s body is not noticeably larger than that of some of its consumer cam relatives, it is immediately distinguishable from other cameras due to several features located on its outside. The removable handle, which is a good innovation as it gives another grip option for those handheld pictures, is maybe the most noticeable of all of the features.

Those difficult-to-capture low angles are now a snap to get thanks to the extra zoom control and lockable start/stop record button that is located at the front of the handle.

Nevertheless, the two phantom-powered XLR connectors, which come with manual audio controls and an external microphone mount, set the detachable handle apart from the competition and make it outstanding. When space is at a premium or you need to transport the item, having the handle that can be removed is a huge asset.

Your photographs will be captured by the XA10’s 1/3-inch CMOS Image Sensor; it will utilize the AVCHD codec; it will record at up to 24Mbps, and its color space will be 4:2:0. The 10x HD Zoom Lens has a 35mm equivalent focal length range of 30.4mm–304mm, and when paired with an 8-blade iris, it creates photos that have a fantastic appearance.

Whether you’re filming for the web or want to give your video a more film-like aesthetic, having options in frame rates (such as 60i, 30p Progressive, and native 24p) gives you freedom.

Canon has been successful in including a large number of features that are essential for any professional videographer to possess. The Touch LCD is the primary access point for most cameras’ capabilities.

The XA10 makes it simple to access the capabilities that are often hidden away in the LCD menu, which is especially helpful while you’re attempting to take a picture.

When a user navigates to a certain function, the LCD will show a shortcut button. Because of the shortcut, making changes to our settings was a breeze, which helped to speed up the entire setup process. The Custom button and dial, which can be found on the rear outside of the camera, are another excellent option to alter the images.

When filming in manual mode, pressing the Custom button allowed us to adjust the shutter speed, iris, and exposure while the video was being recorded. This proved to be a beneficial feature when the shooting conditions unexpectedly changed.

On the other hand, whether shooting in Av (Aperture Priority) or Tv (Shutter Priority) modes, the Custom button can only adjust the iris or the shutter speed, respectively.

When it comes to video production, having subjects that are in sharp and clear focus is of the utmost importance, and the XA10 provided us with a wide variety of possibilities for accomplishing this objective. A good place to begin is with the focus ring in front of the camera. When Focus Assistance is switched on, it will automatically engage whenever the ring is moved.

It offers a magnification of two times, which makes it much simpler for us to produce a focused image. In addition, a color peaking feature, an edge monitor waveform display, and a focusing distance indicator are all helpful in establishing perfect focus.

Touch focus, Face Detection, and Touch & Track assisted us in focusing while reducing the time spent setting up the camera, which is ideal for shooting on the move.

To get proper exposure, in addition to having complete manual control of the iris, shutter speed, and exposure, having zebra stripes and a waveform display are both helpful.

The addition of SMPTE standard color bars and tone (tone of -12dB, -18dB, or -20dB) is also possible with the press of a button.

The XA10 contains 64GB of internal flash memory, which enables it to record for approximately six hours at the maximum quality option (24Mbps), as well as over 24 hours at the lowest quality setting (5Mbps). If you feel that that is not enough recording time, the XA10 has two memory card slots compatible with SD, SDHC, and SDXC cards.

When the internal memory of the camera reaches its maximum capacity, Relay Recording enables the camera to transition recording seamlessly from the internal memory to the SD memory cards. In addition, the SD cards have a setting for Double Slot Recording, which enables you to record a backup copy of your work while recording it on the card itself.

Sometimes the best things come in the smallest packages.

The XA10 may be a beefed-up version of Canon’s higher-end consumer models; however, it has plenty of features that will satisfy the professional looking for a camcorder at a lower price point. Additionally, it gives those who are new to professional camcorders a healthy push in the right direction without making them feel overburdened by an excessive number of controls or a large form factor.

The XA10 may be a beefed-up version of Canon’s higher-end consumer models; however, it has plenty of features that will satisfy the professional looking for a camcorder at a lower price point. Additionally, it gives those who are new to professional camcorders a healthy push in the right direction without making them feel overburdened by an excessive number of controls or a large form factor.