Before the Fujifilm GFX 100 came around, Fujifilm had already done a decent job of redefining what we should expect from medium-format cameras. However, this third edition of Fujifilm’s GFX series is quite a change from the preceding GFX 50S and GFX 50R models that built its foundations. 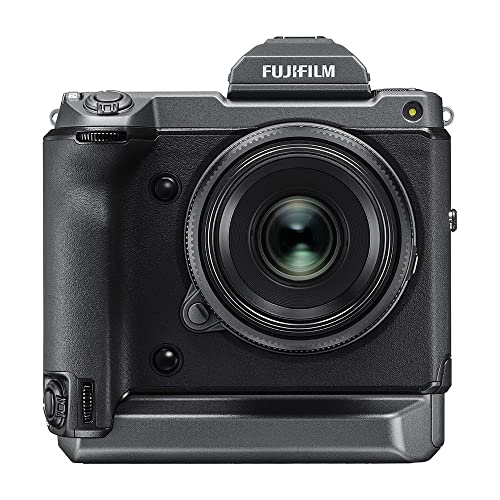 The sensor, which has 102 megapixels, is the main attraction in this case. It is neither a recent development nor exclusive to medium format cameras that the ability to generate images with this level of resolution possesses. However, the uniqueness of the GFX 100 may be attributed to the camera’s medium format sensor, mirrorless design, price point, and the fact that such photos are delivered as standard rather than through any sensor-shifting sorcery that is specifically designed for this purpose.

Although it has the same size as the sensors found in the GFX 100’s sister models, which Fujifilm categorizes as medium format, Fujifilm refers to the 102-megapixel sensor located within the GFX 100 as being “large” format.

It is not based on the X-Trans architecture found inside most of the company’s X-series models. Instead, it has a back-illuminated design that allows for better light gathering, and a conventional Bayer RGB color filter array fronts it. This design will enable it to gather more light.

The company’s G lens mount is situated in front of the sensor and is compatible with a limited but expanding number of GF lenses. These GF lenses include prime and zoom choices and now cover a respectable range of focal lengths and apertures.

A few of these choices come with their own Optical Image Stabilization (OIS) systems. Still, the GFX 100 comes standard with its five-axis sensor-based stabilization system that can function on its own or in conjunction with any of these other systems to achieve a total of 5.5 stops of image stabilization. This has never been seen on a medium-format camera before.

The Fujifilm GFX 100 has been designed with its vertical grip to give it a styling that is more comparable to that of the Canon EOS-1D X Mark II or the Nikon D5 professional sports DSLRs. This is in contrast to the initial GFX 50S, designed to resemble Fujifilm’s X-H1 X-series camera, and the GFX 50R, which was an enlarged version of the company’s rangefinder-like X-E3 model.

This grip cannot be detached from the body of the camera, perhaps for the best, given that it is home to the two large batteries responsible for providing power to the camera.

The grip may be the area of the GFX 100’s design that is the most lacking. Although it is equipped with a secondary shutter release button, as well as a set of command dials and other controls that make such a practical design for shooting in portrait orientation, the camera is significantly less comfortable to hold and operate in this mode compared to when it is in the landscape orientation. This is due to the camera’s thinness, the absence of any sculpting or rubber on its body, and an awkwardly recessed autofocus lever on one side.

It is possible to use it for the rare photo, but the design seems to have been something of an afterthought, and it is not even close to being as sophisticated as on a camera such as the Olympus OM-D E-M1 X.

With the same Single Point, Zone, Wide/Tracking, and All choices as on earlier models, as well as the ability to increase the default 117 points to 425 for finer control, anybody coming from these or an X-series model will feel very much at home with this one.

The ability to focus isn’t nearly as instantaneous as on some other mirrorless cameras, but the difference is slight, and the improvement over the earlier GFX models is readily evident. The GFX 100 performs a surprisingly good job of getting a lock on objects as rapidly as it does, and it continues to focus without any issue when light levels decrease. This is incredibly amazing when considering the size of the lenses for the system.

When you bring the Fujifilm GFX 100 up to your eye, the size and clarity of the electronic viewfinder (EVF) are the first things you notice. Now that 5.76 million-dot viewfinders are available on somewhat more reasonably priced cameras – albeit just two, the Panasonic S1 and S1R – we anticipate they will be included as standard on cameras of this type.

The resolution of those EVFs makes them appear comparable on the specifications sheet; nevertheless, the GFX 100 has an advantage in magnification, with 0.86x compared to the 0.78x of the two Panasonic cameras (in 35mm terms).

And the end effect is nothing short of spectacular: the picture is not only big and bright but also fills your field of vision with a crystal-clear recreation of the scene. Although we occasionally noticed some slight color fringing at the margins of certain elements, this is a common problem with viewfinders that are functionally equivalent to ours.

A 100-megapixel sensor for a medium format camera is enough to pique the interest of many photographers, and the resulting degree of detail in photos is genuinely astonishing. We were allowed to test the camera with the GF 110mm F2 R LM WR and the GF 32-64mm F4 R LM WR lenses. Both of these lenses proved capable when we used them with the camera, and you can view the results of our testing below.

The GFX 50R and GFX 50R have demonstrated that they are pretty good at controlling noise, and the GFX 100 follows in their footsteps by also being very good at handling noise. Images taken inside at sensitivities as high as ISO6400 or ISO8000 can still be used in their entirety, and superb details can be found hiding beneath extremely slight noise. If you opt to have this feature enabled for JPEGs, noise reduction in the camera does not do too much damage to the image.

Load more
Before the Fujifilm GFX 100 came around, Fujifilm had already done a decent job of redefining what we should expect from medium-format cameras. However, this third edition of Fujifilm's GFX series is quite a change from the preceding GFX 50S and GFX 50R models...Fujifilm GFX100 Review