Fuji released a new X-T1 Graphite edition in September 2014 with some additional features, including a high-speed electronic shutter, a Classic Chrome film simulation mode, and a new ‘natural live view’ option to make the electronic viewfinder appear more like a regular optical viewfinder. The original X-T1 is black, but the new X-T1 Graphite edition is graphite in color. 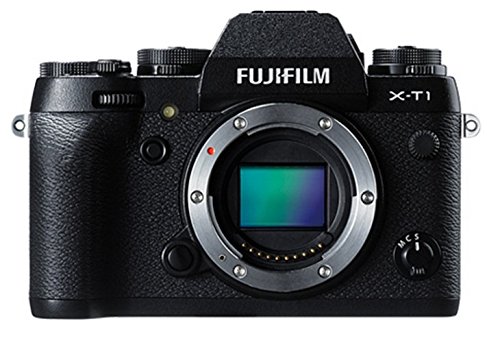 However, they were made feasible by modifications to the camera’s programming, and not the camera hardware. Additionally, in December 2014, Fuji released a version 3.0 firmware update for both models, which brought them up to date with the most recent technology.

Therefore, if you already own an original black X-T1, you aren’t losing out on anything. The newest version of Fuji’s firmware achieves full compatibility with the X-T1 Graphite. The Graphite version will always be a bit more expensive, but this is because it is more costly to apply the finish.

The X-T1 Graphite has the same design and layout as the first-generation X-T1, with the exception of the finish, of course. It is loaded with dials and buttons, and it has a beautiful retro design that is sure to make a broad variety of photographers salivate at the prospect of getting their hands on one. It has the form factor and operation of traditional film single-lens reflex cameras, in contrast to most digital single-lens reflex cameras that do not.

The Fujifilm X-Pro1 and the X-E2 both have a body that is rectangular and resembles a rangefinder, while the X-T1 has a design that is more like that of a DSLR. The electronic viewfinder (EVF) creates a somewhat prominent bump on the otherwise flat top when placed in its sitting position. The finger grip has also been smoothed off and made more visible.

There are a more significant number of direct control dials on the top plate of the XT1 than there are on the full plates of other cameras in the X series. This is explicitly done to appeal to traditionalists.

The body shell of the Fujifilm X-T1 was cast from magnesium alloy, giving it a substantial and hefty feel thanks to Fuji’s usage of this material. When a weatherproof lens is connected, the device is rendered impervious to the elements thanks to eighty seals preventing dirt and moisture from entering.

The Graphite model is the one that looks and feels the most sophisticated. When compared to the silver finish that is available on some cameras (such as the Olympus OM-D E-M1 ‘Silver’), it has more of a tone that is in between silver and gray.

This does result in a tiny price increase, which helps to explain why the Graphite version continues to cost more than the Black version, even though the specifications and features of both versions are now the same.

The X-T1 contains exposure settings designed in the classic form, and the top plate has a multitude of dials, just as we would anticipate from a camera in Fuji’s X-series. When you are using the camera, a sensitivity dial is located on the left side of the device. It goes from L1 to H2 and has numerical settings that range from 200 to 6400, as well as an automated option labeled A. There are markings for the places corresponding to a third of a stop in between the entire holidays.

To avoid making unintended adjustments to the exposure settings, there is a lock button located in the middle of the sensitivity dial. This button must be pushed before the dial may be adjusted. A second dial can be placed directly beneath this one, which is used to set the driving mode.

This provides access to bracketing, self-time, and advanced filtering settings, in addition to the single and continuous (high and low) shooting modes. Additionally, the motion panorama mode is available. You might mistakenly move this dial when adjusting the ISO speed using the dial above it, but this is something that you will most likely become accustomed to with time.

The standard mechanical shutter on the X-T1 has now been joined by an electronic shutter that has a maximum speed of 1/32,000 of a second and is made possible by upgrades to the X software. T1’s However, this is not intended to capture things that are moving quickly. Instead, it is there to take advantage of the small depth of field and the bokeh produced by Fuji’s fastest prime lenses, even while shooting in direct sunshine.

When you click the Q button on the back of the X-T1, the Quick Menu is activated, just like the other cameras in Fuji’s X-series. This allows for a more direct approach to essential functions such as the Film Simulation mode and the white balance settings. You first browse to the option you desire, then use the command dial on the back of the device to make the necessary adjustments to the ground.

The X-T1 has delivered an outstanding performance, which aligns with our expectations. Especially towards the lower end of the sensitivity range, the images are filled with great information. The absence of an anti-aliasing filter helps to make this degree of detail possible. Thankfully, the architecture of the sensor prevents it from bringing with it any moiré patterning that would otherwise be there.

The colors are rendered accurately. The various film imitation modes offered by Fuji help alter the appearance of your photographs. Switching to Velvia is a fantastic choice if you want to increase the saturation and contrast for deeper colors. It is also a good choice for shooting in Provia mode, which is usually suggested for everyday shooting.

The usage of Astia is beneficial if you require tones to be somewhat more impartial. It is also helpful to take advantage of the monochrome shooting modes. Taking the picture in raw format ensures that you always have a color version of the photograph at your disposal, should you require it later.

The Fujifilm X-T1 is capable of producing photographs of exceptional quality. It captured noise-free JPEG photos at ISO 100 up to 6400, with only a tiny bit of noise at ISO 12800 and more noticeable noise along with a small color desaturation at the faster setting of ISO 25600, which is an astounding performance for a camera with an APS-C sensor. Despite this, the new top speed of 51200 should be avoided at all costs. The RAW files were also very high quality, providing useable photographs over the whole ISO range (200-6400).

All of the cameras in the X series have garnered a lot of praise and admiration from our team. Fuji truly has a grip on manufacturing cameras with a retro appearance that delivers good results. Just a few short years after the first in the line, the X-T1 is another beautiful addition to the line-up of cameras that the company produces. There are a lot of people who like Fuji’s style, and it’s not hard to understand why.

Simply put, using the X-T1 is a beautiful experience. It is a throwback to an old-fashioned working method, although it is less demanding than the Nikon Df, which is created in the same style as this particular model. It also has a substantially lower price tag than that camera, despite the obvious disadvantage of having a less extensive sensor.