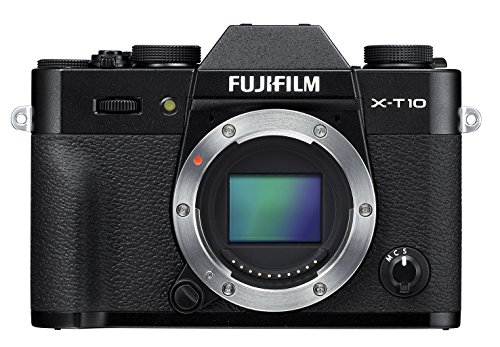 We are not the only ones who feel this way; it has also garnered a lot of support from amateur and professional photographers who are searching for a more compact (and funkier) alternative to an SLR camera.

There is the Fuji X-T10, a somewhat more compact mini-me version of the Fuji X-T1 that utilizes the same APS-C format 16-megapixel X Trans CMOS II sensor and EXR Processor as the Fuji X-E2 and Fuji X100T. The Fuji X-T10 is available.

This sensor also has phase detection autofocusing points, which are an integral component of the camera’s hybrid AF technology. Fuji says that this system has a focus time of under 0.06 seconds.

Even though it does not have the weather-resistant design of the X-T1, just like the other CSCs in the X-series, the X-T10 is extremely beautifully put together. It has a structure that is pleasingly sturdy thanks to the use of die-cast magnesium alloy. It has the appearance and feel of a high-quality piece of equipment and is a fitting addition to the X-series family of products.

The X-T10 doesn’t appear to be that much smaller than the X-T1 whether viewed from the front or the back. The new camera, on the other hand, seems to be quite a deal more slender when viewed from above.

The front and back grips are also less obvious, but they nevertheless function extremely well, and the camera feels secure and comfortable in your hand owing in part to their super-grippy coating. I carried it around by the grip for around two hours with the Fujinon XF50-140mm f/2.8 R LM OIS WR lens installed, and although it was a touch front-heavy, it felt secure the entire time.

The Fujifilm X-T10 has the same X Trans CMOS II picture sensor and processing engine as the Fujifilm X-T1, so it shouldn’t come as much of a surprise how high the quality of the photographs produced by the new camera is. Particularly remarkable for a camera with only 16 megapixels is the degree of detail that can be captured by it. This is possible in part because the architecture of the sensor does not call for an anti-aliasing filter, which helps prevent more interference.

Noise is very effectively controlled across the native sensitivity range. Even at the highest setting (ISO 6,400), photos have a good resolution even though the camera is set to its highest sensitivity.

JPEG files recorded using this option have an even pattern of luminance noise that is evident at 100%. Despite this, the files still appear decent, and sufficient detail is present to generate attractive A3 (11.7 x 16.6-inch) prints.

Raw files, as is customary, include some chroma noise, but this can be readily managed, allowing you to strike a nice balance between the noise and the quality of the image.

One of the most common complaints regarding the focusing performance of earlier X-series compact system cameras was their inability to track moving targets. The modifications to the focusing mechanism that were introduced by the X-T10, and which are currently being sent out to the X-T1 with a firmware upgrade, are aimed at solving the issue, and there is a significant improvement.

Even when shooting in Continuous High mode, it is possible to choose between nine individual points or, as described in Build and Handling, move the zone across 15 points. The greatest flexibility is offered when the camera is set to the Single-shot or Continuous Low mode when taking pictures.

As long as the active zone or single point is maintained over the subject, the camera performs a decent job, and it can produce crisp photographs in the majority of situations even when the light is low. On a cloudy day and in a covered location, I could get consistently crisp photographs of skateboarders. On a bright sunny day, I could capture consistently fine images of cyclists racing in a triathlon.

When a manufacturer below an existing model introduces a new camera model, the biggest challenge for the manufacturer is to make the new model appealing without taking away from the appeal of the existing model. We believe that Fuji has done an exceptionally good job with the X-T10 in this regard.

The X-T1 is now selling on the market for a price that is substantially more than the price of the new camera, which is enticing, but the general construction and feel of the new camera are very comparable.

The most notable distinctions between the Fujifilm X-T10 and the X-T1 are, in addition to the price, the absence of weatherproofing, the reduction in the size of the electronic viewfinder, and the removal of the sensitivity dial.

There is still a lot to offer enthusiast photographers thanks to the fact that the traditional exposure controls are still present, along with many of the features of the X-T1 (including, but not limited to, the sensor and processing engines).

An easier path to the drive modes and a fully automatic override switch, which gives the camera control of exposure, white balance, and color, are added to the new features that make the camera more user-friendly for inexperienced photographers.