Canon, a Japanese company, announced at the annual National Association of Broadcasters (NAB) trade conference that they would be releasing two new professional-grade XA camcorders this year: their newest XA30 and XA35 models. 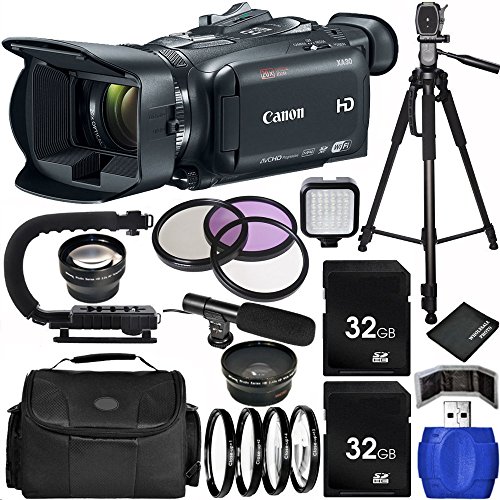 The fact that these camcorders are equipped with some of the most cutting-edge video-capturing capabilities should come as wonderful news to most of those who film documentaries or shoot events.

Even while amateurs shouldn’t run into any issues if they try to utilize them in the same way as experts, it is easy to deduce that these are designed for professionals (for the most part) simply by looking at their price tags and coming to that conclusion.

Your footage’s ability to perform well in low light will be much improved because of the inclusion of Canon’s new HD CMOS (Pro) sensor in both of these cameras, which have designs that seem incredibly professional despite their light weight. The fact that none of these cameras is capable of filming in 4K resolution is the most significant drawback of this release.

You should give this some considerable consideration before moving further. In this day and age, 4K is a crucial feature since it is gradually becoming the norm. However, most of the time, cameras in this price range that genuinely provide 4K resolution are not an enhancement to what you get with the XA30.

We will go through the most important features and improvements in such a manner that you will easily be able to compare them to those of other cameras, including 4K models, that you are thinking about purchasing and make an educated choice.

The key enhancement brought about by the new Canon CMOS image sensor is related to the camera’s performance in low light conditions and the overall quality of the photographs it produces. It is not uncommon for experts to have difficulty setting their cameras in such a manner that the photos that are captured are an accurate representation of what they are truly viewing.

No more, however. Images captured by the XA30’s brand-new sensor are of the sort that faithfully reproduces what the human eye can perceive near the camera. Instead of preoccupying yourself with the image quality, you are free to direct your full attention to the subject of the shot.

If you upgrade from an earlier XA model, the signal-to-noise ratio of your new device will improve by an additional 3 dB. Even when you’re photographing in low-light conditions, this causes the pixels in your image to be very clear.

The lens has a minimum object distance of 60.9 cm (23.6 inches), and it has an impressive zoom range of 35 millimeters. Your photographs will, in general, have a lot more realistic and natural appearing appearance as a result of an enhanced 8-blade design, and this improvement will be especially noticeable when used in conjunction with the upgraded image sensor.

It is equipped with a conventional zoom ring, which can be used with a great deal of ease. This ring lets you take advantage of the different sensitivity levels and customizable directions. For instance, the zoom speed can change from continuous to rapid, slow, or normal depending on whether or not you are taking video. This lens has a high degree of adaptability and provides practically every modification that could be desired.

Because the true high definition is the most crucial feature, you’ll be relieved to learn that the XA30 makes up for the absence of 4K resolution by combining the maximum degree of versatility in video recording. This will make you happy to hear that the XA30 does this.

You have complete control over everything, from the recording modes and codecs (such as AVCHD and MP4) to the frame rates and bit rates, and you can even film using several SD cards. If you are shooting a documentary or a film, you should stick with the standard frame rate of 24 frames per second (p).

As a result of the XA30’s improved software, you can now adjust the speed of your video as it is being played back, meaning that you do not have to wait until post-production to either speed up or slow down your footage when you are out in the field.

Numerous options allow you to speed up your film (useful if you’re recording a time-lapse) or slow it down (ideal for shooting fast-moving action scenes). In addition to that, you have the option to make use of the interval recording tool, which gives you the ability to successfully produce time lapses on the fly at any pace between two and one thousand and two hundred times the normal movement speed of your movie.

You will find the XA30’s many connectivity possibilities to be beneficial if you operate in a setting that is comparable to a small office and has a pressing requirement to transmit data as soon as you return to shooting. Wi-Fi connection is the feature that stands out the most. It even allows you to transmit your raw footage to any cloud-based or private server using FTP, thanks to its built-in dual-band Wi-Fi (which can cover connections at 2.4 GHz and 5 GHz).

In addition to this, it can connect to any Wi-Fi hotspot, as well as your iOS phone, any wirelessly equipped smart TV or PC, etc. You might wish to take advantage of this when you’re out shooting since, while you’re connected to the camera wirelessly, you’ll have the ability to manage the camera (recording start/end, zooming, shutter speed, white balance, and frame rate) using any standard mobile device. The program may be downloaded for free and is simple to use.

This is a specialized function that is only available on Canon’s higher-end models of cameras, such as the EX30: Said; it selects the sections of your video that have a high level of brightness, compresses them, and then increases the dynamic range by a few hundred percent.

This is all done automatically, but the main idea is that it takes the bright parts and smoothes them out, adjusts the colors so they are as near to reality as possible, and corrects any potential overexposure that may have occurred.

Compared to other pricey 4K cameras, this is one of the characteristics that sets it apart from the competition. You have reached the stage when you must choose between having higher image quality or superior resolution.

If you’re sick of your photos running out of memory or having to swap between memory cards, the XA30 will significantly reduce the frequency with which you have to do so. The panels are compatible with SD, SDXC, and SDHC cards respectively.

Even though the footage is already sufficiently stable, you should still try out the new optical image stabilization feature to reduce blur in circumstances where you cannot rely on stabilization hardware.

In addition, there is a mode called “Intelligent Image Stabilization” that will choose the type of image stabilization that is best suited for the footage you are shooting automatically.

It is an excellent choice for individuals ranging from student filmmakers to professional news crews due to the Canon XA30’s versatility as a professional-grade, compact camera that can be used for various purposes.

Suppose you’re coming from an earlier model of Canon camera. In that case, this one is an all-around improvement, creating footage that looks more natural than ever before while offering the highest level of customization options.