The XC10 is the Canon Cinema EOS camera that serves as the company’s entry-level model. On the other hand, in comparison to other models in the Cinema EOS lineup, like the C100, it is a very unique beast. 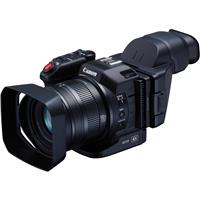 To begin, at a price of slightly more than 1,500 dollars, it is considerably more comparable to camcorders intended for consumer use. This camcorder does not have an EF mount and it does not have a large Super 35 sensor either. Instead, it has a lens that is permanently attached.

Despite this, the XC10 is equipped with a large CMOS sensor measuring one inch and has the capacity to record 4K video. Could this be the crossing between camcorders and DSLRs that everyone has been waiting for?

To put that one-inch CMOS sensor into perspective, it is significantly smaller than APS-C and Micro Four Thirds (MFT) sensors, but it has around four times the size of the 1/2.3-inch sensors that are often found in camcorders.

As a consequence of this, it should exhibit much greater sensitivity, coming closer to that of a DSLR, and it should also provide more film-like video characteristics, both of which have contributed to the popularity of DSLRs and camcorders such as the Canon Cinema EOS range and others of their kind among video makers.

Given that Canon offers such a high-quality selection of lenses with an EF mount, the fact that the XC10 comes with its own lens is very unexpected. If you paid this amount for a digital camera and it did not include a lens that could be swapped out, you would be quite dissatisfied with your purchase. In the past, camcorders of this price range typically came with lenses that were already attached to the device. It’s one of the many reasons why shooting video with DSLRs is becoming increasingly popular.

This is something that has the potential to throw off a lot of people, especially considering that small system cameras like the Sony A7S give 4K video and interchangeable lenses for around the same price; however, the fantastic Sony A7R II costs a lot more. In spite of the fact that it tries to bridge the gap between digital cameras and camcorders, the XC10 is most obviously a camcorder.

Having said that, the lens in question is rather impressive. It is not part of Canon’s most advanced L series, which may be found on some of the company’s early fixed-lens professional camcorders, such as the tape-based XH A1. In spite of this, it has a focal length range of 24mm to 240mm, which is similar to 35mm, and a maximum aperture that ranges from f/2.8 to f/5.6. This camcorder has a 10x optical zoom, which can only be replicated by one of the detachable Canon EF mount lenses that are now available, and that lens costs nearly the same as this camera does on its own.

Although I continue to have my doubts regarding Canon’s decision to exclude EF from the XC10, I recognize that this choice may be acceptable in some areas and may even be advantageous for users who do not have a great deal of prior expertise. Canon is going after people who are passionate about photography, producing their own films, using B cameras, and gathering news.

Although I believe that the majority of these people could become viable customers, independent filmmakers will still want greater lens flexibility. For example, they might want to add one of Canon’s cost-effective 50mm big-aperture lenses so that they can pull focus or achieve an extremely shallow depth of field.

Considering that this camera is intended for enthusiasts, one further decision that at first glance seems strange is the selection of recording media. There is, as might be expected, a space for an SDXC card, although this slot can only be utilized for recording still photographs and video in Full HD resolution. There is a CFast 2.0 slot available for recording in 4K.

This is due to the fact that 4K video may be captured at a rate of either 205 or 305 Mbits per second. The latter exceeds the capability of even the quickest Class 10 SDXC media, whilst CFast 2.0 media typically provides roughly 500MB/sec of transfer speed. Unfortunately, the price per gigabyte is also around five times more than that of Class 10 SDXC cards.

A 64GB CFast 2.0 card will allow you to record roughly 25 minutes of content in the highest quality 4K mode while using the MXF-based XF-AVC file format for video recording. Because it is encoded in the Long GOP format at a rate of 50 Mbits/sec, Full HD is capable of conforming to the criteria for broadcast television.

There is the option for slow recording as well as quick recording; however, this does rely on the shooting format that is being utilized. In 4K mode, you can allow time lapses of up to 1,200x, but there is no high-speed option. Footage may be captured in Full HD mode at up to 100 frames per second and then played back at 25 frames per second to provide a slow-motion effect equivalent to four times its normal speed.

Controls and User-Defined Settings for the Canon XC10

The control scheme of the Canon EOS XC10 is a bit of a mix between that of the Cinema EOS and the EOS DSLRs. On the very top of the rotating hand grip is a dial that functions as a function dial. This dial allows the user to choose between scene mode, auto, programmed auto, shutter priority, aperture priority, and completely manual, just like a DSLR. To spin this dial, you will need to click a button that is located in the middle of it. As a result, unintentionally switching modes will be difficult.

There is a wheel located just behind the button that operates the shutter or record function. It is not possible to quickly change the function of this dial by pressing a button in the same way that you can with Cinema EOS cameras. Rather, it has to have a purpose that is permanently assigned to it through the menu. It manages the iris by default, but it may also be reassigned to regulate the shutter speed or the ISO. The other two will be shown on the screen, but only the one that has been allocated to you will have an orange highlight and be able to be changed using the wheel.

In addition, three user-configurable buttons provide quick access to other options, but I would have liked to see a couple more of these accessible to customize. The two buttons on the left-hand side of the camera are used to manage Push AF and toggle the information display. The third button on the back of the camera is used to operate screen magnification, which allows for more precise focusing. Nevertheless, each of the three may be put in charge of a unique function, and there is a wide variety of combinations available to choose from.

What cannot be controlled using the different distinct buttons and knobs may be accessible using the tilting 3-inch touchscreen LCD, or by using the joystick that is located on the back of the hand grip. Both make use of the same menu system, which makes available a variety of features such as looks, such as EOS and Cinema EOS, as well as Wide Dynamic Range and Canon Log. The several image stabilization choices, such as power optical image stabilization and dynamic picture stabilization, may both be managed from this screen.

In the completely manual mode, the shutter speed may be adjusted anywhere from 1/2 to 1/2000th of a second, and the iris can be set anywhere from f/2.8 to f/11. The ISO settings go all the way up to a staggering 20,000, although anything beyond 2,000 starts to get fairly noisy because this setting is effectively video gain. The ISO settings range from 160 to 20,000.

Therefore, the ISO capabilities are not quite on par with those of Cinema EOS cameras equipped with Super 35, which are able to record clear film at sensitivities as high as 3,200 or even 6,400 ISO.

The Canon XC10 is a member of Canon’s professional Cinema EOS line; however, it does not have all of the professional capabilities that are available on other models. The camera does not include an XLR audio connection, however, it is unclear where such a sizable connector could be placed on a device of this size.

There are a variety of additional capabilities, such as control over Wi-Fi through a web browser, and a cover that is included in the packaging that transforms the LCD into a highly usable electronic viewfinder (EVF). This is especially helpful in a strong light when the LCD can become a bit difficult to read. This helps explain why Canon designed everything that can be done on the touchscreen also be done with the joystick.

Canon XC10: An Overview of Its Capabilities and Image Quality

It should come as no surprise that the high image quality that DSLRs provide is the primary reason why videographers find them so appealing. If the XC10 can demonstrate that it excels in this area, then its shortcomings may be overlooked. It has a good amount of capability, and the photographs it produces are superior to those that can be produced by camcorders with smaller processors. Particularly, the depth of field may be rather shallow when the aperture is set to f/2.8, which makes it feasible to achieve pleasing Bokeh effects.

Because of the high data rate, videos captured in 4K resolution have an incredible amount of detail, and there is not the slightest trace of any artifacts. Even when the color settings are left in their default state, the results are quite true to life. It is possible to produce the recorded video with exactly the appearance that is wanted or to match it to the recorded video that was captured on another camera by making extensive use of the additional Looks, the broad dynamic range, and the Canon Log choices.

In comparison to the absolute finest that the industry has to offer, the image stabilization on the XC10 wasn’t quite up to pace, but the camera is incredibly light and simple to operate when held by hand. The XC10’s big chip enables it to capture high-quality video regardless of the lighting conditions that are present. It is obvious that it is not as sensitive as the rest of the EOS Cinema series, which all have Super 35 sensors, but its low-light capabilities are significantly superior to those of non-DSLR camcorders that cost less than £2,000, which I have tested in the past.

Despite the fact that it has several shortcomings, the XC10 managed to win me over as a camcorder. But if you’re seeking the Holy Grail of a device—one that can act as a DSLR camera and a camcorder with equal ease—this isn’t quite it. It’s not quite the Holy Grail.

The XC10 places a greater emphasis on its video recording capabilities. However, the quality of digital photographs is far higher than that of a conventional camcorder. The majority of the time, you will probably be extracting stills from 4K video footage anyhow.

This might be an excellent camcorder for an enthusiast who takes more video than images in order to capture near-cinema-quality film of that vacation of a lifetime they will remember for the rest of their lives. Students of the digital film may benefit from it as well, as could those who shoot news events. In comparison to the DSLR option, this one is a bit more expensive; nevertheless, the 4K video format that it uses is far superior to that of any DSLR, and its video recording is significantly simpler to manipulate.