Since the release of the D2X, the expectations of a younger generation of Nikon fans who are eager to see their firm compete on the same level as Canon’s have increased.

Users of Nikon products have been let down by the fact that the firm has consistently lagged behind its main rival in the fight for the advancement of sensor technology. Since early 2003, customers of Canon cameras have had access to the 11-megapixel EOS 1DS, whereas Nikon users have only had access to 5.9-megapixels with the flagship D1X. (first introduced in 2001).

Although the D2X is not capable of matching the pixel quality of the new 16.7-megapixel EOS 1DS Mark II, understanding the post-capture process has educated professionals and amateurs alike that the number of megapixels is not the only thing that matters. However, a high-quality 12MP camera may be pushed further than its pixels might imply; in fact, it can reach the same ceiling as the EOS 1DS II. A solid 12MP sensor is suitable for most purposes.

The High Speed Cropped mode on the D2X is by far the most revolutionary and ground-breaking feature of the camera. This provides users with the ability to switch from shooting at a resolution of 12.2 megapixels at a burst rate of five frames per second to a smaller crop of 6.9 megapixels with a burst rate that matches that of the D2H at eight frames per second, even though the buffer is slightly reduced from that camera.

The D2H can save 50 JPEGs of full quality and 40 RAW files, however, the D2X can only store 35 JPEGs and 29 RAW files. This isn’t too much of a handicap, especially when one considers that Canon’s 8.5fps EOS 1D II only achieves 40 JPEGs/20 RAW, thus it’s possible that the D2H will become unnecessary for photographers who have the financial means to purchase a new camera.

While the D2X is somewhat inferior to the 1D II in terms of resolution while shooting in High Speed Cropped mode, it outperforms the 1D II when it comes to focal length multiplication. This results in a 2x magnification rather than a 1.5x one, which should eliminate the requirement for slower, more cumbersome lenses or even the use of teleconverters (a 300mm lens becomes 600mm).

There are a number of additional features that have been upgraded on the D1X, and there are a few upgrades that are particularly noteworthy on the D2H. (some of which are replicated on the new D2Hs).

The latter is especially helpful for extracting as much usable information as possible from shadow detail. It enables the user to clip highlights in a single channel (with due care) while remaining certain that the information will be recovered during the RAW conversion step.

The only significant step backward is a drop in the flash sync speed from 1/500 second to 1/250 second, which will irritate those individuals who are attempting to minimize the influence of ambient illumination with studio flash (High-Speed Sync mode covers the fill-in base for on-camera flash in bright light conditions).

The bulky body is a creative reworking of the D1X and closely resembles the D2H in that it is well-labeled and easy to read from the get-go, and it features recessed buttons to minimize accidental hits.

Even Canon users shouldn’t have any trouble getting a handle on the layout, since it is far simpler to understand than the 1DS II’s ridiculous button combinations for exposure mode, autofocus mode, bracketing mode, and drive mode.

Once you’ve figured out everything in the layout, it’s not necessary to take your attention away from the action because you can still see what shots are left in the viewfinder, and all of the essential image parameters are included as well. This means that you don’t have to worry about missing any shots. In addition, there is not the slightest bit of uncertainty that the addition of the Function button would improve the workflow for the overwhelming majority of users.

Because of the enormous screen, vibrant style, and user-friendly organization, navigating the menu system is a delightful experience. This helps a great deal. The more you use the camera, the more you’ll come to rely on the Recent Settings page, which provides access to the eight settings that you’ve modified most recently. This is something that you’ll find yourself relying on more and more as you continue to use the camera.

The same can be said for the shooting banks, which are an outstanding idea revived from the D1X and have the added benefit of being able to be labeled individually. The custom functions each have their own separate banks, and there are a lot of them that are organized in a logical fashion.

In addition, you can add speed to the expanding list of benefits associated with using D2X. The power-on delay is merely 37 milliseconds, and the viewfinder goes dark after just 80 milliseconds. Unless you truly go all out with the ‘Burst’ command, it’s going to be quite difficult for you to hit the buffer limit.

A test that was done in Burst mode with 16 compressed RAW and JPEG Fine (big) files was completed in 46 seconds using a 1GB Lexar WA 40x card from the commencement of the writing process. This equates to an amazing transfer rate of 4.6MB/s.

According to the handbook, timings are improved when using a SanDisk UltraII card; thus, it is quite plausible that our card was the cause of the bottleneck (80x Lexar cards are now available). Even more astonishing is the result of the same test carried out using a card that does not support WA and does not have a high speed. The lesson to be learned from this situation is…

The one area in which Nikon fails to deliver is with its decision to encrypt the white balance information on this camera. This means that third-party RAW conversion software, such as Adobe Camera RAW for Photoshop CS2 (CS does not have D2X compatibility as of yet) and Capture One Pro by Phase One, are unable to read the “as shot” white balance setting on the camera (though the less renowned Bibble Pro has found a way).

Because of this, those who routinely handle huge quantities of files in batches are going to find this to be a major pain in the neck because it implies that each instance will require manual intervention. Both ACR and Phase One have their own automatic white balance systems, but the results aren’t necessarily accurate all the time.

Using Nikon’s weak PicturePerfect 1.1 is not a viable alternative, and spending an additional £110 on Nikon Capture 4.2 is money that was wasted; the software is extremely sluggish and has a user interface that is difficult to navigate.

The wonderful piece of news is that the image quality produced by the D2X is of the highest standard. Due to the exceptional amount of information and sharpness displayed by the RAW and NEF files, less of the usual software sharpening that is required for DSLRs is carried out.

The dynamic range is quite strong, and we accomplished the remarkable feat of rescuing a tremendous amount of detail from shadows that had been cut by two entire stops without adding the typical prohibitive amounts of noise; this is a success that has never been accomplished before.

Once the white balance was adjusted appropriately, Nikon Capture, ACR, and Phase One did not produce any problems with the color accuracy of the images they produced (and JPEGs are perfect). However, there are typical yellow/green blotch issues with skin that occur when the green/magenta slider isn’t set correctly.

There are no issues up to ISO 400 with the D2X, but many people may place their bets on it at ISO 800 and above. The D2X does not quite surpass the competition in terms of ISO noise. Although photographers working in low light might want to exercise some caution, an otherwise outstanding performance shouldn’t be dissuaded by a little bit of additional ISO grain.

In light of this, considering that an additional $3,000 can get you a decent lens, the D2X provides a far higher return on investment than Canon’s EOS-1Ds Mark II does. You shouldn’t put any faith in Nikon’s plan to continue using cropped sensors. Full-frame 35 mm sensors may have long been the goal of digital photographers, but they do make considerably higher demands on the lens. The advantage of only using the “sweet spot” portion of the lens is obvious.

The D2X is a camera that won me over the more I used it because of its rapid responsiveness and robust build, which engender a degree of trust that is not accessible with cameras of a lower caliber. You are aware that the camera will respond immediately each time you touch the shutter release button, allowing you to take the photograph without fail. As a tool for photography, it is as close to flawless as I could ever conceive; in fact, there is very little else you could want from a camera at this point.

The D2X incorporates two cameras onto one body, saving Nikon the trouble of developing two distinct versions. The innovative research and development team at Nikon came up with the idea to offer a mode with a lesser resolution that could take photos at a faster frame rate. 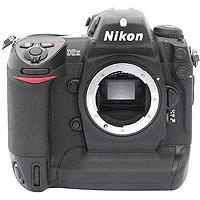 You'll need a wide range of photography equipment to get the job done. If you want to capture excellent photographs, you'll need more than...

The Canon PowerShot ELPH SD430 digital camera "rocks," in contrast to its predecessors. The Canon SD430 is resting on its slightly curved WiFi antenna...

Quick Tips for Recording and Editing a Vlog

Vlogging was formerly regarded to be a passing fad by many people; nevertheless, it is safe to state that this assessment was not correct....