Even though it has been on the market for well over three years, the Nikon D3500 is still our top selection for the best DSLR camera for beginners, and it even holds its own against some of the most formidable competitors for the title of best DSLR camera overall. 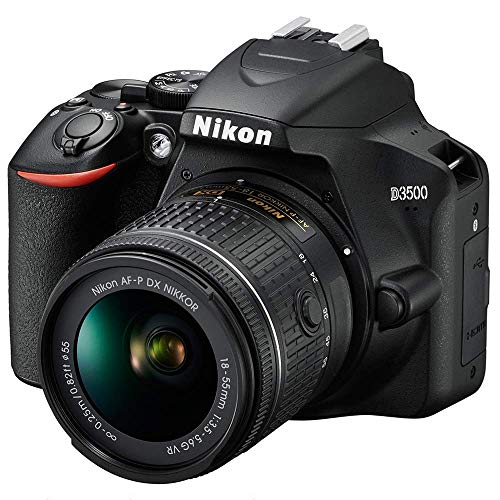 Why so? Although this is somewhat because of the absence of fresh competitors, as the majority of camera manufacturers have already discontinued production of new DSLRs, it is also because of the D3500 masters the fundamentals in a manner that very few other cameras have been able to accomplish.

To begin, it possesses all three of the major benefits that DSLRs have over their mirrorless counterparts, namely excellent battery life, excellent handling, and a reasonable price.

The latter is due in part to the fact that the D3500 utilizes an optical viewfinder, as opposed to the electronic viewfinders (EVFs) found on mirrorless competitors, and in part to the fact that its vast array of native lenses is no longer sufficiently fresh to warrant high price tags. Because of this, the Nikon D3500 is considered to be one of the greatest low-cost cameras that money can buy.

Although the D3500’s age works in its advantage in terms of pricing, it does mean that it is missing several functions that are common in more recent cameras. The first disadvantage is that it does not support 4K video capture, which is currently the industry standard for most new cameras. However, if you are OK with the 1080p resolution of the camera (or if you are not very interested in video at all), this should not be a major issue for you.

Although there were not many changes made to the Nikon D3500’s specifications when compared to those of the D3400, the camera’s design went through some revisions, and the aesthetics of the current model are more closely aligned with those of the Nikon D5600.

When picking up the D3500, the most noticeable difference is that the grip has been beefed up to provide a more robust feel. The bigger grip not only makes the camera easier to hold securely in the hand, but it also improves the camera’s overall balance, which is especially helpful when working with longer and/or heavier lenses.

The autofocus system is the same 11-point Multi-CAM 1000 AF system that covers a considerable area of the viewfinder in a diamond configuration. Additionally, this system features a couple more AF points than Canon’s closest competitor, the EOS Rebel T7 (known as the EOS 2000D outside the US).

When coupled with the kit lens AF-P 18-55mm f/3.5-5.6G VR and given that your subject is not located on the outside edges of the frame, the autofocus mechanism will perform an excellent job of locking onto stationary subjects.

It is inevitable that focusing will become somewhat slower in low light, and it is in these conditions that we would look to use the central AF point more, taking advantage of its enhanced cross-type sensitivity. Focusing is quiet and, in good light, nice and brisk; however, it will inevitably slow down a little bit.

There is also an AF assist lamp that can help out when the light levels are really low, although this feature can be turned off if you want because it can be distracting in certain conditions. If you choose to use one of the inner 10 AF points, you will notice that the camera will be able to lock on much more quickly than if you used any of the other AF points.

Because there aren’t as many focusing points as there may be, the camera often has trouble keeping up with subjects as they move across the frame. It is in this area where a few additional autofocus points would be helpful, as the currently available 11 points are dispersed a bit too wide, which might cause the camera to lose focus on your subject if they aren’t very prominent in the picture.

When compared to their mirrorless equivalents, entry-level DSLRs often have narrower and less comprehensive focusing coverage than their mirrorless counterparts, which tend to have broader and more extensive autofocus coverage. Although features like Eye AF and Animal Eye AF are available on some mirrorless cameras, such capabilities are more commonly found on models priced at the middle to upper ranges of the market.

The Nikon D3500 is not really a good camera for individuals who want to capture a lot of action because it only has a burst shooting speed of 5 frames per second (fps). It is faster than the slow 3 frames per second of the EOS Rebel T7 / 2000D, although other similar mirrorless cameras, like as the Fujifilm X-T30, are capable of shooting faster if speed is a primary concern. However, with the exception of sports and other activities involving fast-moving action, it should be enough for most shooting circumstances, even those involving racing dogs.

In our tests, the metering on the D3500 functioned quite well, providing constant exposures for most of the scenes and managing to avoid overexposing the subjects that were primarily dark.

If you do find that you need to dial in compensation, you can do it quickly and easily thanks to the dedicated exposure compensation button that is located on the top plate of the camera. This button works in conjunction with the rear command dial.

As was the case with the D3400, we discovered that the D3500’s Auto White Balance is just as competent, with only a number of instances in which it failed us during our study. It handled mixed lighting extremely well and performed very well under artificial lighting, with only a small bit of warmth being lost in some of the photos we took. It also performed very well under artificial illumination.

The great 24.2-megapixel sensor that the Nikon D3500 has is another one of its strengths. It is possible to record photos that are extremely rich in detail since there is no optical low-pass filter placed in front of the sensor. In fact, the results can rival those that are produced by cameras that cost much more than twice as much.

However, in order to get the most out of this sensor, you need to consider purchasing a lens that is not the 18-55mm VR lens that comes packed with the camera. However, you do not need to invest a fortune in order to do so: When paired with the D3500, Nikon’s AF-S DX 35mm f/1.8G (opens in new tab) is an outstanding choice for a lens, and it won’t cost you more than £200 / $200.

If you’re only going to shoot with the 18-55mm VR lens, images may be a little soft at the edges. However, this isn’t something that’s exclusive to Nikon’s bundled lens; comparable optics from competing brands deliver quality that’s on par with what you’d get with the bundled lens from Nikon.

The dynamic range performance is also quite good; it is possible to underexpose images quite significantly (around 3-3.5 EV stops) and still be able to recover detail in the shadows without the image becoming degraded by image noise (fuzziness).

The Nikon D3500 is not a flawless camera by any stretch of the imagination, which is to be anticipated at this price point. However, it is still an excellent choice for beginning photographers who favor the more conventional capabilities that DSLRs offer over those that mirrorless cameras provide.

It is unfortunate that there is no support for 4K video capture or touchscreen functionality. Additionally, it appears that some cost-cutting measures have been taken, as some of the external controls that were available on the D3400 have been removed from this model. Let’s get the negatives out of the way first.

Putting these concerns to the side, the Nikon D3500 is an excellent choice for a beginner who is interested in taking their first steps into the world of photography. Although the results produced by the 24.2MP sensor are excellent, you will need to make an investment in some additional lenses in order to fully realize its potential. Fortunately, Nikon’s DX system offers a vast selection of lenses that can be customized to meet the requirements of virtually any shooting style or budget.

This year, the Sony a7c II Black Friday deals have started early, and there are already lots of discounts available on a variety of...

Is “Red” visible to DJI? — Ronin 4D will not support ProRes RAW.

DJI released a specification update for the Ronin 4D in a tweet earlier today. Unlike previously stated (and unlike our evaluation, which used ProRes...

This year, the Sony a6100 Black Friday deals have started early, and there are already lots of discounts available on a variety of...

How to Buy a Used DSLR Camera: Tips

Let's face it: photography gear is expensive, especially for people who are just starting out and want to become professionals. New DSLR cameras come out...
Advertisment

The Meaning of Sigma Lens Abbreviations (An Easy Guide)

Sigma is one of the most well-known third-party lens makers, and it supplies lenses to several of the world's largest DSLR manufacturers. As a...

When it comes to architectural photography, real estate photography may be a fantastic way to get started, and depending on where you live, it...