Have you determined that you require more than twenty million pixels? Canon is of the opinion that this is the case, and the EOS 5D Mark II, which has 21 million effective pixels and retails for just over 2,200 dollars, can be purchased on the high street.

The Alpha 900, which has 24 megapixels and is Sony’s top model, can be purchased for close to 1,700 dollars. Sony shares this opinion. 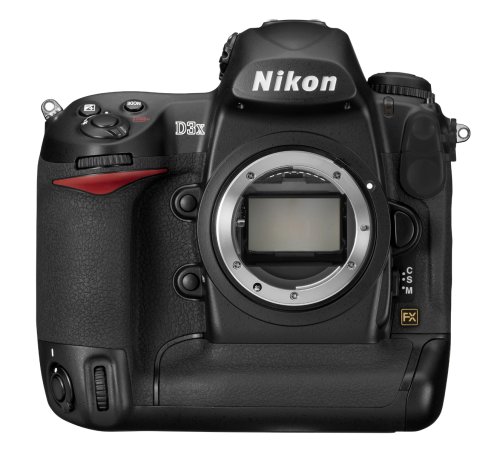 Nikon is the most recent digital single-lens reflex camera (DSLR) maker to get on the super high-resolution bandwagon, and the company’s brand-new 24-megapixel D3x can now be purchased for $5,500 at a photographic store near you.

Wait, that can’t really be correct, can it?

Quality That Is Professional

I guess you could say that. You have to understand that the D3x is a professional single-lens reflex camera, whereas the Canon EOS 5D Mark II and the Sony Alpha 900 are not.

This indicates that the D3x has full weatherproofing, including a magnesium alloy shell that is virtually bulletproof (although we wouldn’t risk testing that), and all of the little extras that professionals count on, such as viewfinder coverage that is 100%, the best autofocus, white balance, and metering systems available.

Therefore, in theory, you should be able to drop the D3x down the side of a mountain, wipe the dust off of it, and still be able to shoot better pictures with it than you could with a camera that cost less money.

In actual use, the idea is validated to a large extent. The body of the D3x is identical to that of the D3, which was first introduced in 2007 and has since won the hearts of thousands of professional photographers all over the world.

It possesses the same high-quality autofocus, white balance, and metering capabilities, as well as the same LCD screen and Live View system, and, well, you get the point. Pixels are something the D3x possesses that the D3 does not.

There are in fact an additional 12 million of them, and they are located on a sensor that is very similar to the one that is used in the Sony Alpha 900.

The D3X and the D3 are virtually indistinguishable from one another; the only change that can be observed on the exterior of the body is the addition of an ‘X’ label. Because the design is an extension of the D2 series, photographers who are familiar with previous Nikon pro series cameras will quickly feel at home with the D3/D3X.

The button layout is essentially exactly the same, and the alterations that have been made to the controls are incremental enhancements rather than wholly original ideas. This is excellent news for working professionals who frequently switch bodies, as is the fact that the control layout consistency extends down the line to the D700 and D300, making these models ideal for use as backup bodies.

The proportions of the D3X make it virtually square, and thanks to a magnesium shell, it is almost literally as solid as a brick in terms of its construction. A purposeful camera is one that has been created with the requirements of the professional photographer in mind and features elements like as robust surfaces, soft rubber on the grips, bigger buttons, locked controls, and environmental seals. This type of camera may be used in any environment.

The image parameters on the D3X are identical to those found on the D3, D700, and D300. You have the ability to load and preserve custom set configurations, in addition to the four standard ‘Picture Control’ presets (which are named Standard, Neutral, Vivid, and Monochrome).

In addition to the newly added brightness adjustment, the existing sharpness, contrast, and saturation controls now have a significantly greater range of motion to accommodate the enlarged range of user preferences. Take note of the ‘Quick adjust’ function as well, which enables related adjustments to be made to the image’s sharpness, contrast, and saturation.

Last but not least, there is a grid view that displays all of the active picture adjustment modes in the form of a saturation vs. contrast (plus sharpness) grid. This view is available.

The ability to raise the sensitivity of the sensor of a digital camera is referred to as the ISO equivalent setting. The “volume” (gain) of the sensor’s signal amplifiers is increased in order for this to work properly (remember the sensor is an analog device).

When you amplify the signal, you also boost the noise, and the noise becomes more apparent as the ISO value increases. At greater sensitivities, a lot of today’s cameras also make use of noise reduction and sometimes even sharpness decrease.

We take a series of pictures of a GretagMacBeth ColorChecker chart in order to determine the amount of background noise (controlled artificial daylight lighting). The exposure is balanced with the ISO (for example, ISO 200 and 1/200 of a second to maintain exposure uniformity between cameras).

Our in-house developed and patented noise measurement software is then applied to the image sequence (version 1.4 in this review). To obtain further details, please go here. (It is important to keep in mind that the noise levels that are displayed on the graphs above cannot be compared to those that are found in other reviews.) The temperature in the room is around 22 degrees Celsius (or 72 degrees Fahrenheit), and sunshine-mimicking lighting is used.

Off, Low, Normal, and High are the four different settings for the D3X’s high ISO noise reduction, which kicks in at ISO 500 or higher. This feature is only active when the camera is set to that sensitivity (with Normal as the default).

The Normal setting offers a good balance between the desire to keep visible noise to a minimum while also not sacrificing fine detail, and the four settings provide a good range of options from very low to high enough to keep noise at bay all the way up into the highest reaches of the ISO range. The Normal setting can be found by pressing the “Normal” button on your camera’s dial.

D-Lighting is a shadow and highlight enhancement that, on earlier models, was an after-the-fact filter that you could only apply to images when you were viewing them in playback mode. However, starting with the D3 and D300, ‘Active’ D-Lighting is a menu setting that is applied to all images if it is enabled.

Off, Low, Normal, High, and High, as well as Extra High, which is exclusive to the D3X, are the five levels that can now be selected.

In the end, the D3X materialized in the month of December. We’ve had it for a little over a month now, and after taking hundreds of test photos in the studio and out in the field, you may expect us to be able to firmly answer the question of whether or not the ‘X’ variant is capable of outperforming the original D3.

On the other hand, it should be obvious to anyone who has even a passing familiarity with camera technology that it is not possible to provide a conclusive response to this issue.

Due to the fact that a significant amount of the design of the D3X and the D3 are the same, it should not come as a surprise that the two cameras have comparable capabilities in many respects. However, despite the fact that the new model is unquestionably superior to the D3 in certain respects, in other respects it is inferior.

Both the excellent 51-point autofocus system and the 1005-pixel metering sensor have been immediately carried over from the D3 to the D3X, and they function just as well on the D3X as they do on the D3. The image resolution at low sensitivities is where the D3X really shines and outperforms the D3 by a mile or two. The build quality and ergonomics are both good as well, but this is where the D3X really thrives.

The output of the images at the lowest possible ISO (and with high-quality glass in front of the sensor) can only be described as breathtaking. The high-resolution sensor of the D3X, when combined with a relatively weak anti-aliasing filter and an outstanding JPEG engine, delivers a level of sharp detail that surpasses that of even the most formidable competitors, including the Canon EOS-1Ds Mark III, which was formerly ranked number one in this category.

It is simply incredible how, as you continue to zoom into the enormous image files, you can uncover an increasing amount of granular detail. If capturing fine image detail is at the top of your list of priorities, as it would be for many high-end studio photographers, there is little question that the D3X should be your top choice among the available options.

However, the image detail that is unrivaled in its class does come at a cost. It is certain that this will have an effect on in-camera processing, buffering, and continuous shooting because a 14-bit RAW+JPEG image will use almost 30 megabytes of space on your memory card.

Having said that, the D3X’s continuous shooting rate of five frames per second (12-bit RAW and JPEG) will still be sufficient for the majority of applications, and if it isn’t, you can always switch to DX mode to speed up the process and take 10.5-megapixel images at seven frames per second. Although it may not quite reach D3 speed, it is still an amazingly quick pace.

When and Why Should You Shoot in Different Frame Rates

I've been getting more and more into video stuff over the last few years. I understood what frame rate was and how to utilize...

How many cameras have the ability to record content in 4K? More than just a couple of them. However, there is a significant gap...

Have you determined that you require more than twenty million pixels? Canon is of the opinion that this is the case, and the EOS 5D Mark II, which has 21 million effective pixels and retails for just over 2,200 dollars, can be purchased on...Nikon D3x Review

Photographers who shoot with cameras in the M-series have been patiently waiting for the release of the Leica M9 camera. It is Leica's first digital...

Many of the same challenges are faced by compact waterproof cameras and other compact electronic devices. It is not always easy to fit strong...