Nikon is hoping that this summer’s Olympic Games will be covered by professional sports photographers and photojournalists using the Nikon D4. 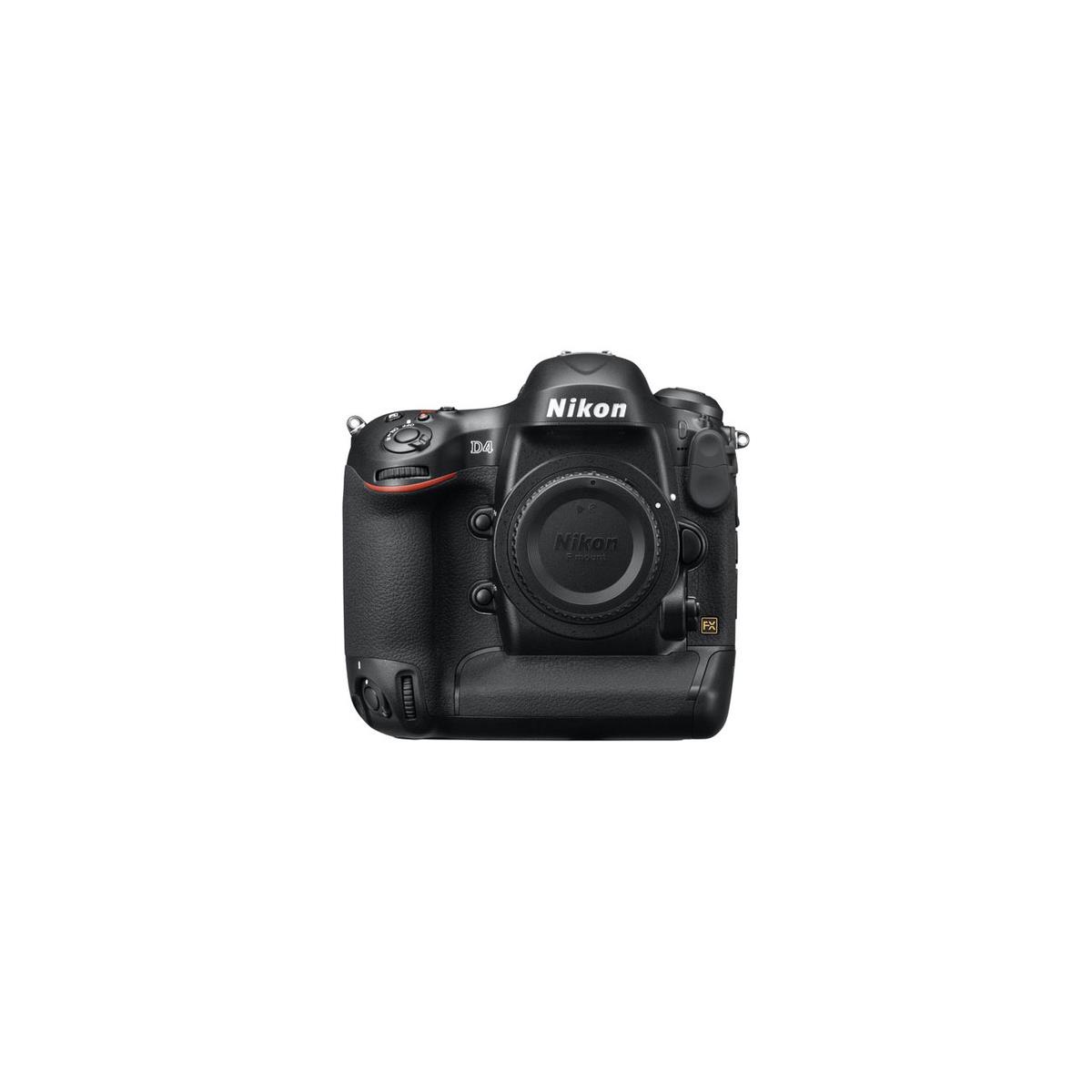 As a result, it is made to be an all-purpose camera that can be used anywhere and photograph anything, with increased low-light shooting capabilities and upgraded video technology.

The 24MP Nikon D3X continues to be the brand’s flagship camera, despite the fact that the Nikon D800 now has more pixels than it does, replacing the Nikon D3S in Nikon’s DSLR lineup.

While there are many reasons to be enthusiastic about the Nikon D4, the number of pixels may not be one of them. Although the Nikon D4’s full-frame (36 x 23.9mm or FX-format) CMOS sensor has “only” 16.2 million effective pixels, it should be able to produce quite clear photographs at high sensitivity levels.

This is fortunate because it has extension settings that can reach the equivalent of ISO 204,800 and a maximum native sensitivity setting of ISO 12800.

Owners of Nikon D3s cameras, on the other hand, might be a little more thrilled with the Nikon D4’s pixel count because it represents a significant increase from 12.1MP to 16.2MP.

Despite the increase in sensor resolution, the Nikon D4 can shoot continuously at 10 frames per second with full focusing functionality because of its EXPEED 3 image processing engine. Only 9 frames per second (fps) at full resolution or 11 fps in DX mode are possible with the D3s.

The full-resolution continuous shooting rate of the Nikon D4 may also be increased to 11fps if you’re willing to give up AF and exposure control.

The switch from a 1,005-pixel metering system to a 91,000-pixel system is another significant improvement over the D3s. As before, this is connected to Nikon’s Advanced Scene Recognition System to provide guidance for the AF, flash exposure, white balance, and face detection systems.

Nikon has maintained to use of the Multi-CAM3500FX AF system, which debuted in the D3 and was carried over into the D3s, but it has given it a bit of an upgrade for the Nikon D4.

The center 15 cross-type AF points are sensitive down to f/8, but there are still 51 AF points overall. This means that long telephoto lens and teleconverter combinations with an effective maximum aperture of f/8 will continue to be compatible with the AF system of the Nikon D4.

This is fantastic news for wildlife photographers because it makes it possible to utilize more accessible and lightweight lenses. Additionally, the Canon EOS-1DX cannot compete with it.

A full-resolution, uncompressed HDMI feed to other devices is also an option.

The Live View image can be viewed on an iPad when the Nikon D4 is connected to the new Nikon WT-5 Wi-Fi transmitter that is included. Additionally, the shooting mode, AF point, and shutter release can all be managed via the iPad.

Wildlife photographers who may prefer to sit away from their cameras may find this to be appealing as well.

In conclusion, the Nikon D4 very much offers everything a freelance photojournalist and sports photographer might want. Nikon reportedly chose a 16MP sensor because it offers a solid compromise between a large pixel count, which allows for more effective cropping or shooting in DX format, and good high-sensitivity performance.

In many ways, the Nikon D4 feels incredibly sturdy and would probably stop a bullet if necessary. However, a tiny bit of movement in the lid covering the memory card compartment detracts from the sample’s overall feeling of quality.

When holding the camera for use, this door rests under the fleshy base of the right thumb, and it feels as though the hinge might be moving. Even if it’s a minor fault, it is unsettling in a camera that costs about £5,000/$6,000.

The door and its seal are identical to those on the Nikon D3S, although our Nikon D4 sample’s door was prone to little movement while the door on the D3S sample we have is stationary. Nikon has been notified of this problem, but we have seen and used additional samples that don’t share the same problem, suggesting that this might be an isolated incident.

In keeping with the criticism of the memory card slot region, the door lock cover also seems a touch thin and might be easily ripped off by overly zealous use.

The Nikon D4 boasts two mini-joystick controls for choosing the AF point, which is a significant improvement over the D3S. When the camera is held for shooting in landscape or portrait format, one or the other is placed to be easily accessible to the right thumb.

To activate the AF system without using the shutter release button, each of these controllers is connected to an AF-on button. The vertical shooting shutter release button also has a configurable function button next to it, which eliminates the need to remove the camera from your eye or flip it over while using it.

Another excellent feature is the ability to dimly illuminate the camera’s buttons on the top, back, and sides when it is in use. Normal daylight doesn’t show this, however, at night the button icons are just bright enough to be seen. Given the Nikon D4’s low-light capabilities, it makes shooting in the dark considerably simpler, and it is sure to be a well-liked feature.

Prospective Nikon D4 purchasers are now far more likely to prioritize video recording capabilities, therefore the new camera includes a discrete Stills/Video switch next to the Live View button on the back. As a result, switching between still and moving image recording is rapid and simple.

Another notable difference from the Nikon D3s is that the aperture/shutter speed lock button has been replaced with a button on the top plate, replacing the metering switch that was formerly located on the pentaprism.

The Nikon D4 offers a variety of AF point selection modes, including single-point AF, auto-area AF, 9-, 21-, or 51-point dynamic-area AF, as well as 3D-tracking AF, similar to the Nikon D3s.

But the Nikon D4 adopts the same strategy as the D7000 and has a switch and button configuration next to the lens mount, unlike the D3s, which employs a switch on the back of the camera to select between the settings.

Using the switch, the Nikon D4 may be switched between auto and manual focus. When autofocus is chosen, switching between single and continuous AF mode is accomplished by pushing the central button while turning the rear command dial.

Pressing the button while turning the front command dial switches between the Single-point, Auto-area, 9-, 21-, and 51-point, and Dynamic-area AF modes in continuous AF mode.

It is simpler to make adjustments while maintaining eye contact with the camera with this method.

To lessen reflections, enhance the viewing angle, and increase brightness, Nikon filled the LCD screen’s space between the glass and crystal part with an optical gel. In most shooting situations, we discovered that the screen offers a clear vision, and reflections aren’t a significant problem even in direct sunshine.

Professional photographers will need to know this if they plan to capture the Olympics this summer under the scorching sun.

In conclusion, the Nikon D4’s construction is straightforward and seems sturdy and built to handle heavy use. Each joint and control has a seal to protect it from the wear and tear that comes with being a tool for a professional photographer.

Images appear good right out of the Nikon D4; when the general-purpose matrix metering system is employed, they are generally well exposed, and the colors and contrast look natural.

Images captured across the natural sensitivity range also display an outstanding level of detail. However, as one may anticipate, at lower sensitivity settings, the 16MP Nikon D4 falls short of the 24MP Nikon D800 in terms of detail resolution.

Given that noise is very well controlled across the whole native sensitivity range, Nikon’s choice to cap the effective pixel count of the Nikon D4 to 16.2 million appears to be a prudent one. Even photos taken at ISO 6400 and ISO 12800 look fantastic when printed in A3 format.

The D3s have been successfully expanded upon by Nikon to provide a versatile camera that can be used by professional photographers in a variety of settings.

Even while the Nikon D4 doesn’t have the greatest resolution, it boasts incredibly fast reactions, a fantastically high maximum shooting rate, and the ability to capture an astounding level of detail throughout a wide sensitivity range.

As the first of the recently announced high-end cameras to go through our testing process, the Nikon D4 prevents us from comparing it to its major opponent, the Canon EOS-1DX, at this time. But as soon as we get our hands on a 1DX, we’ll start doing this.

How is Artificial Intelligence (AI) Changing the World of Photography?

Photography is a continually changing technology. Every camera is controlled by a computer. As a result, there are several techniques to enhance information processing....

Some Point to Help You Improve Your Real Estate Photography

Real estate photography may be a successful extension of your present business, or you can specialize in the field and become a professional in...

Canon unveiled images of monster telephoto lenses that will compete with Nikon.

Canon has been teasing the introduction of its longest super-telephoto RF lenses for some time and a new leak hints that professional wildlife photographers...

https://youtu.be/fNoGVrygJjA When it comes to landscape photography, one of the most challenging aspects is the constant need to strike a balance between constantly shifting environmental...
Advertisment

The best SD memory cards for the Canon Rebel SL2 are listed below. Here is a complete list of the best and quickest SD...