The 6-megapixel Nikon D40 model cannot be upgraded, and the D80 cannot be replaced with the Nikon D40x. Instead, it awkwardly balances between the two models, broadening Nikon’s selection of enthusiast and enthusiast-priced SLRs.

In essence, it is a D80 sensor housed in a D40 housing. An odd turn for Nikon, and a difficult decision for someone purchasing a DSLR for the first time. 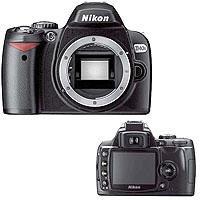 When comparing the D40x to the D40, the higher sensor resolution is the only discernible change. In every other way, the camera’s layout, features, and controls resemble Nikon’s entry-level model.

The higher resolution comes with a significant price premium of £200, so the D40x has a lot to live up to. Not to mention that the Canon EOS 400D, one of the Nikon 40x’s main competitors, is now being sold for about £100 less than the D40x.

The Nikon D40x DSLR camera, which was unveiled barely four months after its predecessor, is nearly identical to the D40 with the exception of one significant difference: its 10.2-megapixel sensor, which was directly lifted from the D80, as opposed to the D40’s 6 megapixels.

The D40x is essentially a 10-megapixel D40 with a few minor changes, however, the extra megapixels come at a higher price, and, more importantly, it now competes with the Canon Digital Rebel XTi/400D and the Sony Alpha A100.

If you’re upgrading from a compact digital camera to a more “serious” DSLR, the Nikon D40x is still a solid choice. However, are the additional megapixels worth the additional cost?

You can immediately tell why the Nikon D40x is so inexpensive when you first take it out of the package. It is incredibly lightweight because of its all-plastic design, especially if you have previously used a more costly DSLR. The included 18-55mm kit lens, which is also built completely of plastic, is the same.

Fit the body and lens together, and everything starts to make a lot more sense, even if you are still unsure about your purchase decision. All of a sudden, you are left with a well-balanced product that is light by DSLR standards but doesn’t feel skimpy or insignificant.

Additionally, Nikon refrained from shrinking the D40x to the same size as some of its primary competitors, namely the Canon EOS Rebel XTi/400D and the Olympus E-400. Instead, the D40x follows in the footsteps of the earlier D50, maintaining a thick handgrip and a “business-like” appearance that is more practical than attractive.

The D40x is undoubtedly made for “regular” hands, which helps to dispel the initial impression that the camera is overly lightweight and plasticky.

The D40x is a pretty complex camera in terms of functionality and the number of external controls it offers, with about 16 in total and some of them having more than one function, despite being targeted at new digital SLR owners.

The Nikon D40x has a lot of buttons and switches, but it doesn’t feel overly cluttered or scary, and using it quickly becomes second nature. When handling, the D40x is really pleasant. I was able to grasp the camera with three fingers and operate the shutter button with my right forefinger thanks to the deep, curved handgrip that is coated in a rubberized compound on the right side of the device.

Your right thumb sits in a small, curved space; the remainder of the body is covered in gleaming, smooth black plastic. The Nikon D40x’s regular 18-55mm kit lens snaps into place with a comforting mechanical click and seems well-balanced on the camera.

You will either love or despise the Nikon D40x’s shutter release movement because it is fairly loud and mechanical. I enjoyed it, but it’s not the best for close-up candid photography because your subject might hear you if you get too close.

In overall, the Nikon D40x is expertly constructed and created. The Nikon D40x is a typical DSLR, with a shooting mode dial on top of the camera that lets you choose between seven scene settings or an advanced mode like aperture priority.

The 10M Fine JPEG mode, which results in an average image size of about 2.5Mb, was used to capture all of the sample photographs included in this review.

The Nikon D40x has six ISO levels that you can choose from at any moment when the camera is in shooting mode. At ISO 100, 200, and 400, which are the slowest settings, there is essentially no audible noise. At ISO 800, noise begins to show up, but even at ISO 1600, it is still rather well controlled.

At the fastest speed of ISO 3200, as you might anticipate, a lot of detail is lost and the photographs have a “painted” appearance, but they are still excellent for small print sizes.

When Nikon sent me the D40X press releases, no one was more shocked than I was. With the exception of a base ISO 100 sensitivity and 3.0 fps shooting speed, Nikon was set to announce a ten-megapixel version of the six-megapixel D40 camera, which had been available for less than four months.

The fact that the D40 went from six to 10 megapixels in just four months raises the obvious question: why didn’t Nikon just issue the D40X in the first place? Why wasn’t the ten-megapixel sensor ready sooner? Did they have any remaining inventory of the “vintage” six-megapixel sensor? Probably never will we find out?

But one thing is certain: the new model is positioned to compete with Canon’s EOS 400D, the most prominent digital SLR on the market (Digital Rebel XTi). On paper, it checks all the boxes; the only things it lacks are a physical dust reduction mechanism, a vertical hand grip option, and a restricted ability to change image parameters.

As with the D40, devoted Nikon users may also be let down by the body’s absence of a focus motor, which prevents many non-AF-S/AF-I lenses (including some of Nikon’s greatest prime lenses) from autofocusing.

The D40 also has other drawbacks, such as the fact that when I shot RAW+JPEG, I only received JPEGs of Basic quality. As with most recent digital SLRs, automatic white balance was something you should really only use in natural light, and I didn’t like that there wasn’t a dedicated ISO or WB button on the camera (yes, you can program the Fn button, but I would have thought it more logical to use the four-way controller on the rear from day one). Other factors, like the absence of bracketing, depth-of-field preview, and fixed exposure stages, will be less significant to D40 owners.

Everything we liked about the D40’s operation and performance applies to the D40X as well: quick start-up speeds, quick responses, good autofocus, and a snappy shutter button that makes you want to take more photos.

The D40X is one of the simplest digital SLRs to “carry around,” thanks to its small size without sacrificing ergonomics or comfort. It won’t strain your neck or cause your back to hurt.

This year, the Panasonic Lumix S1R Black Friday deals have started early, and there are already lots of discounts available on a variety of...

With the release of the D810A, Nikon has at long last entered the market for astronomical imaging, despite the company's relatively tardy start in...

When it comes to architectural photography, real estate photography may be a fantastic way to get started, and depending on where you live, it...
Advertisment

Canon's EOS R5 is available in a video-centric iteration known as the EOS R5 C. As a member of the Cinema EOS family, it...

The tiny Canon SX730 HS is ideal for families going on vacation together as well as parents who prefer to picture their children participating...

Best Lenses for Sony a1