The Nikon D70 has been one of the biggest and most touching success stories in digital photography. This camera was able to help Nikon reclaim its proper position as the archrival nibbling at the heels of Canon by fusing excellent appearance, excellent performance, and alluring pricing. 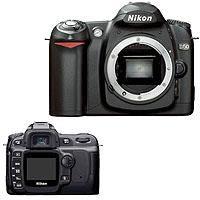 The Nikon D50 advances the concept by providing an even greater number of features in a more compact and affordable design, along with increased performance. This throws the camera into a fight with the Olympus E300, Pentax *st DS, and Canon EOS 350D. Let’s examine how the D50 performs in comparison to this field.

A kit that includes the new AF-S DX 18-55mm f3.5-f5.6G ED lens is available for the camera. This creates a very tidy, small package, and its rakish lines obviously reveal its Nikon heritage. Its heavier-than-expected weight when picked up contributes to its reassuringly robust chubbiness. This meshes well with the overall positive and solid clicks of the controls.

The typical DSLR controls are located on top of the body: an on/off switch around the shutter button, a display next to it with a self-timer, and buttons for exposure override. Simply pressing the self-timer button causes it to switch modes. It’s too simple to do given where the button is, and because the LCD indication is so little, it’s easy to miss.

Two characteristics distinguish images taken by the camera: purity from noise and high dynamic compression. This describes the photographs as having smooth gradations that go smoothly from mid-tone to darker tones.

If a dynamic compression technique is effective at handling a wide range of brightness, more detail will appear in the highlights while shadow features will also be preserved. However, this does have the unintended consequence of giving the photos a little flat or soft tone.

The mid-tone contrast makes up for this, and the overall impression of the photographs is extremely positive. This is partial because of the lens, which performs admirably for its class. Images are beautifully drawn, however, the details could be presented with more clarity.

Overall, a camera that handles and performs well gives all of the necessary shooting features, and is so reasonably priced makes for an excellent entry-level model. It may readily expand to meet growing demands or serve as the ideal backup for a more complete set-up.

Exposure adjustment can be adjusted in steps of 1/3 or 1/2 EV up to +5 EV. A button for auto-exposure and auto-focus lock is also present. The lens that comes with the camera has a maximum aperture of f3.5 for wide-angle shots and f5.6 for telephoto shots. The shutter speed range is 1/4000 to 30 seconds, and there is also a Bulb option. Four ISO speeds, spanning from 200 to 1600, are available.

There are four different methods of focusing: continuous-servo AF (AF-C), single-servo AF (AF-S), and manual focus (M). Five autofocus points on the camera can be chosen automatically or manually.

It is immediately apparent why the Nikon D50 is so inexpensive when you take it out of the box because of how light it is thanks to its all-plastic design, especially if you have previously used a more expensive DSLR. The included 18-55mm kit lens, which is also built completely of plastic, is the same.

Fit the body and lens together, and everything starts to make a lot more sense, even if you are still unsure about your purchase decision. All of a sudden, you are left with a well-balanced product that is light by DSLR standards but doesn’t feel skimpy or insignificant. The Pentax *ist DL and Canon EOS Rebel XT/350D are two of Nikon’s key competitors. Nikon refrained from shrinking the D50 to the size of these cameras.

Instead, the D50 follows in the footsteps of the D70s that I just reviewed, featuring a thick handgrip and a “business-like” style that is more practical than attractive. The D50 is undoubtedly made for big hands, which helps to dispel the initial impression that the camera is overly light and plasticky.

The Canon EOS 300 film SLR, an incredibly well-liked camera that was also totally built of plastic, comes to mind when I think of the Nikon D50. Canon sold a ton of EOS 300s, making it one of the most popular film SLRs ever. I don’t want to spoil the rest of this review, but I think Nikon will also be successful with the D50.

The JPEG Fine (3008 x 2000) option was used to capture each sample image for this evaluation, which results in an average image size of about 2.5Mb.

Nikon made the decision not to compromise their reasonably priced digital SLR, unlike Canon when they created the EOS 300D (Digital Rebel). Instead, the D50 maintains performance and photographic flexibility despite sacrificing some of the capabilities of the D70, which is crucial for first-time consumers who (surely) the manufacturers hope will eventually advance to a more expensive D-SLR.

The sensor and image processing pipeline of the D50 are obviously different from those of the D70/D70s; while it shows fewer moire/maze artifacts, it isn’t quite as sharp as its “older siblings.” Having said that, the D50 is more than capable of delivering some incredible results and is set up to give vivid and colorful images straight from the first exposure. If you choose, you can customize the image processing to create photographs more akin to the D70.

The D50’s noise levels arguably caught us off guard the most; Nikon has obviously made modifications to its design to reduce noise since the D70 was introduced. Even though they are all fairly clean, we’re talking about little amounts of noise here, and the D50 has the lowest noise levels of any of the low-cost digital SLRs we’ve examined.

Though I’m all for making cameras lighter, there’s a limit to how small you can make an SLR before the hand grip feels cramped and controls start to get in the way. The best thing about the D50, however, is that it just feels right. In terms of build, it’s a step above the Canon EOS 350D and Pentax *ist DS. It’s also not too small.

The D50 is a joy to use and feels just as snappy as any film camera. The only modification I might do is probably to add a larger viewfinder (a la the Pentax *ist DS).