The D5300 is Nikon’s “advanced beginner” digital single-lens reflex camera. It replaces the D5200 in the company’s APS-C lineup, which places it between the entry-level D3200 and the D7100, which is aimed at enthusiast photographers. 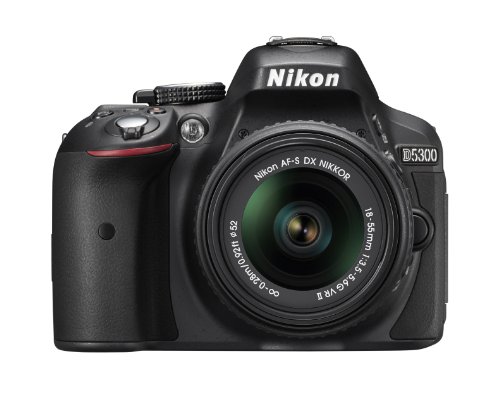 The D5300 is almost an exact clone of its predecessor in terms of both its appearance and its ergonomics (albeit it is somewhat lighter and slightly smaller than its predecessor), but it is a more powerful camera on the inside in a handful of significant respects.

The D5300 has a sensor with 24 megapixels, but it does not have an anti-aliasing filter. This gives it a higher resolution than the D5200, which is similar to what we found when we tested the D7100 and the D800E. Even if the difference is little (especially when a built-in zoom is coupled), it is always encouraging to see advancements in essential image quality possibilities, particularly in models that fall in the middle price bracket.

The D5300 features an improved video mode that is now capable of recording full high-definition video in 1080p at 60 frames per second. Because of this, as well as the fully articulated 1.04 million-dot LCD screen, the D5300 should appeal to filmmakers in addition to still shooters. The screen is 3.2 inches, which is somewhat wider than the screen on the D5200, which measures 3 inches.

Built-in Wi-Fi and GPS are both industry firsts for Nikon’s DSLR line-up, but they are features that are easy to overlook despite their potential utility. The battery life has also been improved; according to the numbers provided by CIPA, the D5300 has an endurance of 600 shots, whereas the D5200 only had an endurance of 500. Keep in mind, however, that this figure does not take into account additional functions like as Wi-Fi or GPS, and that activating these additional services would reduce the amount of time you can spend shooting.

Users with less experience will have no trouble becoming used to the ergonomics and controls of the D5300, which are designed specifically with them in mind. The controls are more or less the same as they were on the D5200, with the exception of a slightly bigger screen on the back of the camera. It has a good set of external controls, but they are by no means the best in its category. Additionally, it features a fully articulated LCD screen that measures 3.2 inches and provides advantages for both live view and video filming.

It is wonderful to have direct access available at this level, which can be accomplished by using the four-way controller located on the back of the camera. This controller is used to shift the active focus point within the viewfinder’s total of 39 selections.

The amount of direct control is comparable to that of the more affordable D3300, which means that the majority of the features can only be accessed through an on-screen fast menu. The D5300 does not have the touchscreen capabilities that some of its rivals’ devices have, which is something that we value very highly in their goods. The D5300 has a body made of plastic, yet it has a very substantial feel to it; there is no bending or creaking.

Both the Canon EOS Rebel T5i and the Pentax K-50 belong to the same class as the Nikon D5300. Although the degree of external controls on the D5300 appears to be enough for an entry-level user, both of these competitor models have greater direct access to exposure adjustments. The D5300 is Nikon’s entry-level DSLR camera. Both the K-50 and the T5i have dual command dials, but the T5i also features a touch screen and physical buttons for adjusting the ISO and the white balance.

The quality of the video clips captured by the D5300 is comparable to that of the D7100, i.e., it is excellent. It is even faster than the D7100’s maximum framerate of 1080/60i, which can only be achieved in a crop mode of 1.3x. In our testing, we did not discover that the D5300 is more susceptible to a rolling shutter than any other camera in its class. Some of the effects can be seen on moving things that have vertical lines, such as autos, although it is not substantial.

To put it another way, the D5300 offers image quality comparable to that of the D7100 but in a body that is around $400 less expensive. It generates JPEGs that are of high quality and a great deal of detail, and those who are interested will discover a great deal of room for editing Raw data.

The Raw files of the D5300, much like the Raw files of its predecessor, enable the shadows to be opened up without adding an excessive amount of noise. The default JPEG rendering is also nice to look at because it does not have any artifacts caused by excessive sharpening.

The video quality of the D5300 is outstanding in the same way that its still picture quality is notable. It provides a resolution of up to 1080p at 60 frames per second and does so without the crop mode that the D7100 applies to videos recorded at its greatest possible quality. As a direct consequence of this, the video captured by the D5300 has increased levels of detail and fluid motion.

The D5300 is an affordable option for a professional videographer looking for an inexpensive backup camera because of its ability to output Raw footage through HDMI and connect to an external microphone. If you are just starting out in the world of videography, the D5300 is an excellent choice.

When it comes down to it, you just cannot argue with a resolution that lacks an AA filter and has 24 megapixels. The D5300 produces images of great quality; in fact, it seems to produce images of somewhat higher quality than its different kit lenses are truly capable of generating. When seen from this perspective, it is an excellent choice for anyone who wishes to begin with the kit and then upgrade to finer glass at a later time.

The Nikon D5300 is a fantastic choice if you are searching for a digital single-lens reflex camera (DSLR) and want something that is approachable but serious but not quite as professional as the Nikon D7100. In terms of picture or video quality, it will not fall short of the expectations of anybody in this category.

Those who are completely new to photography may start taking pictures right away by selecting the Auto mode, while those who are somewhat more experienced will discover that all of their fundamental exposure parameters are rather simple to reach. It is not the finely tuned, semi-professional instrument that the D7100 is, but the quality of the images it produces may fool you into thinking that it is.

Many of our concerns regarding the D5200 have not been addressed, despite the fact that it possesses a robust feature set. There are a few interface issues that prevent us from feeling that warm and fuzzy connection with the camera that we would like to feel, and there are a few things that are still missing that the competition has nailed down, such as a touch screen.

If we’re talking about improvements over the previous model, the addition of Wi-Fi connectivity is perhaps the most important one. Even while it doesn’t make for a very interesting tale, it’s still a handy tool to have along when you’re out shooting.

The Nikon D5300 is definitely going to be overkill for you if you don’t place a high priority on instant photo sharing and you don’t spend much time shooting video. Aside from that, it is an excellent choice for a beginner enthusiast seeking a DSLR that has all the essential features plus a few extras.

Astrophotography-specific enhancements have been made to Canon's full-frame mirrorless EOS R camera, resulting in the creation of a new model called the EOS Ra....

After the success of the Nikon Z50, Nikon has released the Z fc, which is the company's second mirrorless camera with an APS-C crop...