The new 10-megapixel entry-level digital SLR from Nikon is called the D60.

It replaces the D40x and looks fairly similar on the outside.

However, there are some notable advancements beneath the surface. 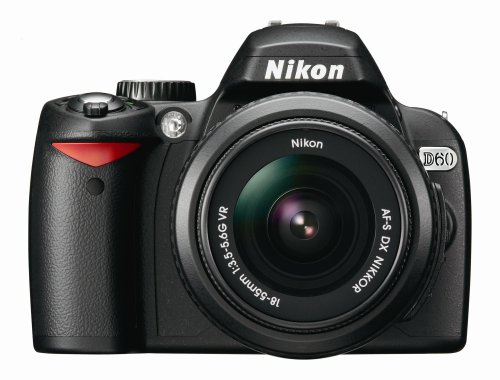 To begin with, the D60 receives a new dust-removal system in accordance with the majority of other digital SLRs available today. Additionally, it incorporates an eye-sensor that turns off the LCD when you place it to your eye just below the viewfinder eyepiece.

The introduction of a new VR (Vibration Reduction) version of the 18-55mm kit lens, which we utilized for our review, is the other noteworthy development.

There isn’t much else to report. The D40 series’ D40 body design is “inherited,” and it is quite compact—possibly too small. The buttons on the rear do feel a little crowded because the body isn’t as tall as a larger camera, making it harder to hold it securely.

The D60 is made with beginners and those looking to enhance their photographic abilities in mind. The UI is appealing and easy to use for new users, but it could irritate more seasoned users. To make the screen display interactive, you must first press the “info” button. Then, using the navigational controller, you must highlight the option you wish to edit.

After choosing this, you can then scroll up and down a list of choices by using the navigational buttons once more. Although everything is quite clearly written out, it takes time.

It does feel like a waste of the Command dial on the camera. Couldn’t this be used to modify the menu selections here? There would be less of this tiresome button pressing, and it would undoubtedly save some time.

Since the D60 lacks a secondary LCD, all settings and status information are changed on the main screen on the back. On the D40 and D40x, this was a little annoying because the LCD remained lit when you held the camera up to your eye and only turned off when you partially depressed the shutter release.

Now that Nikon has added a sensor below the viewfinder eyepiece, this problem has been resolved. As soon as you bring the camera up to your eye, the display goes away. When you flip the camera to capture vertical images, the information display rotates as well, which is a wonderful feature.

The 18-55mm kit lens on the D60 is relatively lengthy despite the D60’s compact body, giving the device a generally imbalanced sense. The D60/lens combination is notably longer than the Canon EOS 400D and the Olympus E-410 in particular, though it is hardly a significant difference.

For this camera, there are now two kit lens options. With a list price of £500, the outdated non-VR Nikkor 18-55mm kit zoom is the least expensive option. However, for only £30 more, you can purchase a D60 equipped with Nikon’s new 18-55mm VR (Vibration Reduction) lens.

This is a great deal, and Nikon’s VR performs admirably. Given the cost, the lens also seems to be well-made. Although the front element rotates while focusing, making it less ideal if you use a polarizing filter, the zoom and focusing operations are good for a budget lens.

Really excellent picture quality can be seen. The D60 can shoot both RAW and JPEG files, although while the RAW files have a somewhat wider dynamic range, there isn’t much of a difference in sharpness.

The JPEGs are completely adequate as long as the exposure is set correctly. Only JPEGs of Basic quality can be taken at the same time as RAW data. This is frustrating because it reduces how beneficial this feature could have been.

For some people, the variety of options for changing the image’s color and contrast may be bewildering.

On the mode dial, you can select a scene mode or change the color to one of several options, such as Standard, Softer, Vivid, Vivid+, and Black and White.

While the manual adjustments are excellent for photographers who want to use the more intuitive PASM modes and change the color settings manually, the scene modes are best for those who prefer to let the camera pick the settings.

The D60, though, does more. You may perform basic in-camera image optimization and improvement in playback mode.

Additionally, if you shoot RAW files, you can edit them in camera as well. This lets you adjust various camera settings and create a second, JPEG version of the image.

Instead, you can use the included View NX image browser to edit JPEGs on your computer. Even if there are just a few RAW conversion choices available, this is still helpful.

Interesting is the Active D-Lighting system. Despite already being present on the D300 and D3, this is another improvement over the D40x. Without influencing the mid-tones and highlights, Nikon’s D-Lighting system softens intense shadow detail.

Before, it was just a software adjustment made after the picture was taken. However, Active D-Lighting first performs the shadow-lightening technique while adjusting the exposure to ensure that the image keeps its strong highlight detail.

In high-contrast images, it occasionally works incredibly well, preserving good detail in both the shadows and the highlights. However, occasionally the shadow “masking” can be seen as a soft-edged “glow” surrounding the darker portions.

This is a common occurrence with this kind of shadow correction, not a defect with the Nikon equipment. It might be useful or useless depending on the situation.

The D60 receives good marks for both the quality of its pictures and the variety of options available for editing photos both during the taking and after they have been saved. Although the control interface is simple, regular modifications require an excessive amount of time.

The D60 is fantastic for beginners, but as you gain experience and desire to work more quickly, its attractiveness can diminish.

The step up from the D40 to the D40X was significantly greater than the step up from the D40X to the D60 (even though Nikon’s naming convention might seem to imply the opposite), and the D60 takes the successful formula established in the D40 / D40X and, well, if we’re being honest, doesn’t do much with it at all.

There are some pleasant new features, and including the new “VR” (stabilized) kit lens is a wise choice that makes the entire package more enticing, but it’s fair to say that the D60 is more of a subtle improvement than a complete overhaul of Nikon’s best-selling entry-level model.

It’s not that this is a bad thing; the D40’s success (and continued success) can be attributed to the fact that it ticks all the right boxes for its target market: it’s compact, well-made, incredibly simple to use, produces excellent results, and—most importantly—it’s most reasonably priced Nikon digital SLR ever produced.

The D60, like the D40X it replaces, offers a significant performance boost (both in terms of resolution and shooting speed), and the user interface improvements, D-addition, Lighting’s excellent dynamic range, the new kit lens, and the dust reduction system make an already excellent camera even better.

The D60 can now perform a few new tricks thanks to the new Expeed processing, which also lessens the visibility of chroma noise at higher ISO settings. However, the difference in output is really small; it’s still vibrant, bright, and “consumer friendly” (though purists may find it a little over-saturated by default).

Meike has just released an unique and intriguing adapter that lets you use EF (or EF-S) lenses on more current Canon cameras with an...

What is the specific issue with Olympus?

https://youtu.be/Sxlhj4C7xmg In January of 2021, OM Digital Solutions completed the acquisition of the imaging division of Olympus. Even if cameras and lenses are still being...

The Canon PowerShot ELPH 190 IS Digital Camera is a pocketable point-and-shoot with a flexible zoom lens. It is a compact, handy camera with...