The Nikon D2Xs that I use is the company’s top-of-the-line model from the year 2006. Since 2004, Nikon’s model for advanced amateur photographers has been the D70. It had a CCD sensor with a resolution of 6 megapixels, a sensitivity range from ISO 200 to 1600, five customizable focusing points, three frames per second (fps) continuous shooting, a maximum shutter speed of 1/8000, a single CF card, a 1.8-inch display screen. It sold for $999 (body only). In addition to that, it features an LCD display that can be found on the top of the device. 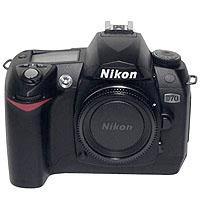 This camera is an excellent alternative to my previous DL model, which is why I decided to get it. Both of these cameras have a resolution of 6 megapixels and make use of the same Sony sensor. The *ist DL was produced a year later for about half the price, however, its autofocus is horrible, there are few buttons that are dedicated to specific functions, and it has a different lens library. Would the D70 have been a more suitable option in this situation? Let’s find out!

The D70 is virtually incomparable to the D2X in every conceivable manner. It is largely made of plastic, and while it still has a sturdy feel, there is no mistaking the fact that it is made of plastic. It has a weight of 1.5 pounds, which is equivalent to half a D2X. The fact that it is lighter yet chunkier than my D750 gives it an impression of being quite hollow.

In comparison to my current DL, it seems extremely thick and enormous. Although it isn’t quite as programmable as a D2X or my D750, it still has lots of specialized buttons, including bracketing, drive mode, ISO, white balance, image quality, metering mode, exposure compensation, and two control dials. In addition, it also has two control dials.

These place the functionalities that are utilized the most front and center, rather than burying them under a maze of menus as my other app does. Even though it has a number of modifications that bring it closer in functionality to my D750 (such as control dial exposure compensation and viewfinder grid lines), it still has a backward exposure meter that I am unable to adjust.

Actually, I find the chunkiness of it to be really appealing. Despite the fact that its design is an improvement on that of the D100, which it is based on, it still has the appearance of a film camera that has had digital guts stuffed into it. When viewed from the rear of the camera, the screen is about the size of a postage stamp.

The button layout is very similar to that of my D750, but the buttons themselves are much smaller, making it difficult to press them while keeping your eye on the viewfinder. When I want to change the focus point, the four-way selector is too small and difficult for my thumb to comfortably hit.

Because it takes up approximately 20 percent of the back, the CF Card slot makes it difficult to position buttons. If it were put on the side, like modern Nikons, it would be more effective. These issues have been resolved in more recent cameras, and the D70 is the camera that paved the way for such improvements.

The D70 behaves and operates fairly similarly to other modern Nikons in terms of both its handling and its shooting capabilities. The viewfinder is bright, and the 5-point autofocus mechanism performs adequately enough for most purposes. Aperture priority and exposure compensation may be easily adjusted thanks to the camera’s two control dials.

Even with screw-mount lenses with comparable aperture sizes, autofocus is undeniably faster than my manual focus method. The AF-S lenses that have built-in focusing motors can be used with the D70, however, my *ist cannot utilize this kind of lens. It also has an advantage over the menu-driven nature of the *ist because of the specialized buttons on the device.

It uses the same strange picture review mechanic as the D2Xs, in which you need to press two buttons and scroll the command dial in order to zoom in on an image. This can be annoying.

It also has several advantages over my D750, such as having a greater maximum shutter speed (1/8000 vs. 1/4000) and a higher flash sync speed (1/500 vs. 1/250), which enables an additional stop of light reduction and the use of flash while shooting in extremely bright daytime.

It does have Auto ISO, but the only way to get it is through a menu setting; unlike other Nikons of the same vintage, the ISO button cannot be used to access it directly like it can on my D750.

The majority of the photos were shot in RAW format, and their quality was on par with that of the photos produced with my DSLR. The photographs are better in general, but that may be because I now have access to a lens library that is significantly larger and of a higher quality than before, in addition to having improved my skill set.

In comparison to other kit lenses, the ones that came with my camera are very sharp, but their ability to take in light is severely restricted. The D70 makes it much simpler to take high-quality photographs because of its improved autofocus, as well as its superior lenses and additional buttons and settings.

If I had bought a camera in 2005, would the Nikon D70 have been a better choice for me? Absolutely, without a doubt. The autofocus is significantly more refined, the camera is significantly more modifiable, and it possesses a lens library that is significantly more extensive, all of which contribute to superior autofocus and additional shooting possibilities. If I had purchased a D70, I most likely would not have converted to a Canon and instead would have graduated to a D300 before settling on a D750 as my final camera purchase.

Having said that, I don’t think I would have found it to be the ideal camera for me at that point in time. First, it was more than twice as expensive as my Pentax because it required additional lenses to be purchased. Due to the fact that I already owned wide angle and telephoto zooms for Pentax, I decided to only get the *ist body. Given my college student budget, this was a challenge in itself. In addition, I wanted a camera that was easy to use and compact, so the D70 would have felt too large and clunky in comparison. It was enough to convince me to carry my itty-bitty Pentax everywhere; I think the D70 would have been a lot less inclined to come along for the ride.

A further enjoyable excursion into the past. Even though many of the digital components have been upgraded, the experience of using a contemporary DSLR is almost the same as what it was when using a D70. Each generation brings along some incremental improvements to image quality, noise reduction, shooting speed, autofocus speed, and ergonomics, but maintains the same basic capabilities as its predecessor. There isn’t much that I can accomplish with my current camera that I couldn’t do with this one; the only difference is that it would be rather more challenging. I’m going to hang on to this one since you never know when the lads might be interested in joining me for some target practice.

Why is it so difficult to locate a consumer camcorder that can capture a quality image in low light? This problem should have been...

Far out! The James Webb Space Telescope takes the first picture ever of something outside the sun.

Don't bother with consumer cameras or cameras on phones. NASA's James Webb Space Telescope is one of the most exciting ways to take pictures...

This year, the Sony a7 IV Black Friday deals have started early, and there are already lots of discounts available on a variety of...

The Canon PowerShot ELPH 170 IS Digital Camera is a versatile and convenient point-and-shoot that offers high-resolution imaging and a long-reaching zoom in a...

This year, the Panasonic Lumix TS7 Black Friday deals have started early, and there are already lots of discounts available on a variety of...
Advertisment

The Canon VIXIA HF G30 Full HD Camcorder can record Full HD video with a resolution of 1920 by 1080 pixels at a frame...