We had to wait a little bit longer for the Nikon Z6 to arrive than we did for the Nikon Z7, but this camera may have the most widespread appeal of Nikon’s two full-frame mirrorless models, especially among photography enthusiasts. 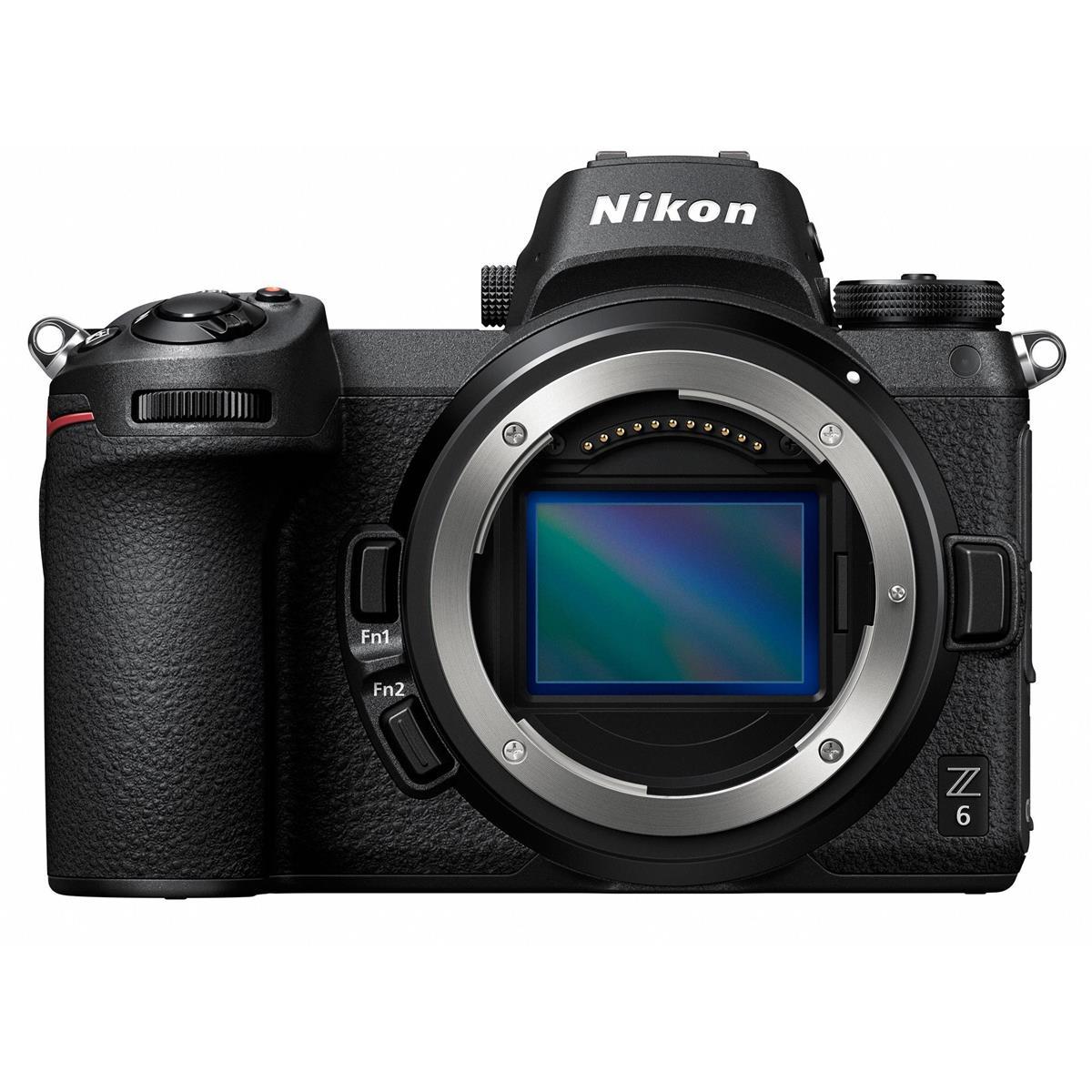 The Nikon Z6 and Z7 share the same design and a pretty much identical spec sheet, but there are three significant differences between the two cameras. These differences include the resolution, the autofocus, and the burst shooting speed. Nikon is adopting a two-pronged strategy that is similar to the strategy that Sony employed when it launched the original Alpha A7R and A7.

The Z6 is positioned as more of an all-around camera, in contrast to the Z7, which is Nikon’s high-resolution offering and features a sensor that is densely filled with 45.7 megapixels. Has Nikon, on the other hand, arrived at the party a little bit too late, considering that Sony has already taken the lead thanks to the outstanding Alpha A7 III?

The design firm Italdesign is responsible for the aesthetic of some outstanding Nikon DSLR cameras, including the D4 and the D800. However, the Z6, which has a more practical appearance, does not quite reach such heights.

As soon as you get your hands on a Z6, any concerns you might have had about how this would affect the way it handles are immediately put to rest. Because of the broad and comfortable handgrip, the camera can be held rather easily with one hand. Those who have larger hands may discover, similar to what we discovered with the Z7, that their little finger hangs just a touch off the bottom of the Z6, but this shouldn’t be too much of an issue for most people.

Even though the Z6 is smaller than a typical Nikon DSLR, the build quality has not been compromised in any way by Nikon’s design choices. Along with a comfy thumb rest and plenty of high-quality textured rubber around the grip and backplate, the Z6 also boasts magnesium alloy in its top, front, and back covers, much like the Z7 does.

The result is that the camera has a very hard feel to it, and Nikon says that the Z6 has the same amount of weather sealing as the D850. The culmination of these factors results in a camera that is extremely robust and of high-quality construction.

In the same area as the button that releases the shutter, there is a switch that turns the camera on and off. However, there are separate buttons for video recording, ISO, and exposure compensation. Simply push down on the selected button, then use the command dial located on the back of the camera to make the necessary adjustments, such as adjusting the ISO or dialing in exposure compensation. Any changes that you make will be shown on the little LCD that is located on the top plate.

While the control layout at the rear of the Z6 is slightly different from that of a Nikon DSLR, the various buttons are clearly labeled and easy to find. Additionally, the Z6 features the same joystick control as the D850. Formerly known as the sub-selector, this is weighted nicely, and it provides easy control of AF area selection. The fairly “Coolpix”-like four-way control pad is the only marginally disappointing aspect of this product.

The methodology that Nikon employs to make the handling of its mirrorless cameras comparable to that of its DSLRs has been carried over to the user interface of the Z6. The numerous sub-menus run down the left-hand side of the display, which is indicative of this philosophy.

And although those who are already familiar with Nikon will surely feel perfectly at home with the Z6, this accessibility is extended to those who are entering Nikon’s ecosystem for the first time – the Z6 is undoubtedly a camera that Nikon novices should have no trouble getting to grips with.

In the Z6’s Single AF mode, you have the option of selecting Auto-area, Wide-area (with either small or big focusing areas), and Single-point focusing, as well as Pin-point focusing, if you wish to achieve a really high level of focusing precision.

The Single AF (AF-S) setting of the Z6 performs exceptionally well for shooting in common situations. Although we found that we utilized Single-point mode the most here, with the joystick that was described before making it simple to shift the AF point across the frame, Wide-area mode on the Z6 can also be highly adaptable when you’re moving around with the camera.

The process of focusing happens fairly quickly, and the only time it takes longer is when there is less light. At this point, the autofocus assist beam will begin to work to aid you in acquiring focus; however, you have the option to turn this feature off if you so want.

However, similar to what we experienced with the Z7, the buffer on the Nikon Z6 is relatively tiny; however, it ought to still be more than acceptable for the majority of users. When we used a 64GB Sony XQD card that had read and write rates of 400MB/s, we were able to shoot 12 frames per second with 35 raw files (12-bit NEF files). When shooting 14-bit NEF files, the burst shooting speed reduces to 9 frames per second, and the buffer size lowers to 33 raw files. Things will go much more smoothly if you slow the frame rate down to 5 fps and take 200 raw files at this rate.

Do you wish to fire in complete silence? The Z6 offers a silent shooting mode that replaces the Z6’s mechanical shutter with an electronic shutter while taking still photographs. The only minor issue is that this mode is hidden at the bottom of the Photo Shooting Menu and is not an option in the Z6’s drive mode list.

Are 24.5 megapixels adequate for you? That depends depend on what you take and how you want to publish your photos, but for many people, the results from the sensor in the Nikon Z6 will be more than high resolution enough.

After putting the Z6 through its paces with the brand new 24-70mm f/4 and 35mm f/1.8 S-Line lenses, we found that the camera’s image quality more than lived up to our expectations. The metering is dead on, and there is a propensity to expose towards the highlights in order to prevent any detail from being blown out. In spite of this, the photographs seem snappy and are richly saturated.

Detail is also extremely good; although more densely filled sensors undoubtedly have the advantage, with superb optics on the front of the Z6, you will be able to shoot photos that are rich in detail and have great corner-to-corner sharpness.

In addition, the Z6 works quite well over the whole ISO range; the results at ISO1600 hold up to careful scrutiny, and there is very little discernible difference between them and photographs shot at ISO100. When you go above ISO1600, the fine detail in your photos may start to suffer a little bit, and you’ll notice some smoothness in your JPEG files. However, shooting at ISO3200 and ISO6400 will still provide very usable and good pictures.

The dynamic range is also quite good, allowing a great deal of versatility; it is possible to recover significant amounts of the shadow detail that would otherwise be lost.

It is possible to recover this shadow detail even at ISO1600 and 3200, and even though it diminishes above that, you can still push files to a useful degree. What is particularly impressive about this flexibility is that it is not limited to the lower sensitivity range of the camera.

When you first hold up the camera, any concerns that it would fall short of expectations are immediately put to rest because it is clear that Nikon has not held back at all with the Z6.

The Nikon Z6 is an extremely nice camera to take pictures with because it has refined handling, a robust build, excellent image quality from the 24.5MP sensor, a brilliant electronic viewfinder, and a ton of other little touches that make the camera more enjoyable to use.

The adoption of a new lens mount is a significant step for Nikon, but if the two lenses that we tested are any indication, it’s one that will pay dividends in terms of improved optical performance as the lens range grows. Additionally, the availability of an optional FTZ mount adapter ensures that you won’t necessarily have to start from scratch if you’ve already made a significant investment in Nikon glass.

It's safe to say that the Canon PowerShot SX210 IS has a lot going in its favor. To begin, there is the remarkable 14x...

Looking for the best gimbal for Sony a7C? Here is our top recommended gimbal for the Sony a7C mirrorless camera. The Sony a7C is the...
Advertisment

We had to wait a little bit longer for the Nikon Z6 to arrive than we did for the Nikon Z7, but this camera may have the most widespread appeal of Nikon's two full-frame mirrorless models, especially among photography enthusiasts. The Nikon Z6 and Z7...Nikon Z6 Review

Best Flash for Sony A9

A new camera flash for the Sony A9 is something you may want to consider purchasing. However, are you feeling overwhelmed by the sheer...