The Panasonic Lumix FZ72, or FZ70 as it’s known in North America, is a super-zoom camera with a 16.1 Megapixel compact sensor and a whopping 60x stabilized optical zoom. That’s the longest zoom range currently available on a compact camera, so in a single bound Panasonic has leapt over the competition including Canon’s best-selling PowerShot SX50 HS and Sony’s Cyber-shot HX300, both of which sport lenses with a ‘mere’ 50x optical zoom.

The big zoom is clearly the headline feature on the FZ70 / FZ72, but it has plenty of other features worth talking about. There’s a fixed 3in 460k dot LCD screen and a 0.2in electronic viewfinder, built-in flash and hot shoe, and twin stereo microphones with a built-in windshield to reduce wind noise. Continuous shooting is possible at 5fps with AF and 9fps with the focus and exposure fixed on the first frame and there’s a raft of video modes with both AVCHD and MP4 encoding offering both 1080i50 and 1080p25 modes among others. 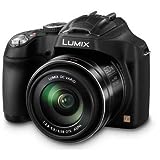 The FZ70 is similar in size and form factor to a small SLR with a kit zoom attached, but its zoom lens covers a wider breadth than any starter SLR lens can manage. It measures 3.8 by 5.1 by 4.7 inches (HWD) and weighs about 1.3 pounds when loaded with a battery and memory card. It’s not far off in proportions from other cameras in this class, even ones with shorter lenses like the 50x Olympus Stylus SP-100 (3.6 by 4.8 by 5.2 inches, 1.3 pounds).

The 60x zoom lens covers a 20-1,200mm (full-frame equivalent) field of view with an aperture that starts at f/2.8 and diminishes to f/5.9 when zoomed all the way in. It’s the widest angle in the class-Canon’s SX60 HS comes close with a 21mm wide-position lens-and the extra coverage at the wide angle shouldn’t be discounted when shopping for a long zoom camera. The Nikon Coolpix P600 also features a 60x zoom ratio, but its 24-1,440mm contact lens doesn’t capture quite as broad of a field of view at its widest setting.

Many zooms in this class, including the SX60 HS and the P600, include a framing assist function. This is usually a button or lever that temporarily zooms out, so that you can reacquire a subject you’ve lost track of. A box is added to the LCD or EVF to show you what the zoomed-in see captures, and releasing the button or flipping the lever again returns the zoom to that position. The FZ70 doesn’t have this, and it’s a shame, as it’s a function that’s very useful when capturing images with such a narrow angle of look at.

Controls are located on the top and rear plates. On top you’ll find a mode dial, with the power switch located at its side, the zoom rocker and shutter release, and buttons to record movies, adjust the burst shooting mode, and adjust the active focus area when the FZ70 is set to its 1-Area focus setting. Other focus modes include Face Detection, Tracking, and 23 Area (which automatically selects a focus point); by default they’re set via the programmable Fn2 switch on the rear.

Other back controls add a mechanical release for the pop-up flash, a switch to switch between the rear display and EVF, and the programmable Fn1 key, which activates exposure and focus lock automagically. There’s an AF/Macro AF/MF button that adjusts the concentrate mode, the standard playback and delete controls, and a four-way controller with a center Menu/Set switch. Its directional presses include the aforementioned Fn2 key, and dedicated control keys to adjust the ISO, white balance, and self-timer. The final rear control is a dial; it can adjust aperture, shutter speed, or exposure compensation depending on the capturing mode. You’ll need to press it in to toggle its functionality. That’s pretty typical for a Panasonic camera-the FZ1000 has a control dial that behaves similarly-so you’ll want to take care to note which function it’s arranged to regulate before turning it. Its function can change from how you’ve established it if the digital camera goes into sleep mode.

The FZ70 uses Panasonic’s on-screen Q.Menu system for additional adjustments to shooting settings. It’s only energetic once the camera is defined to capture pictures (it doubles as the delete button when reviewing photos). It allows you to make quick modifications to the picture output settings, change the flash output, set the video and still resolution, change the autofocus and metering settings, and modify aperture, shutter velocity, or exposure payment. The menu runs across the top and bottom of the Live View feed, so you can still see what the lens is able to capture while making changes.

You can frame images via the trunk LCD or eye-level EVF. The LCD is a 3-inch panel with a 460k-dot resolution. The display is adequately sharp for shooting, but it does fall a bit short when reviewing images when compared with a 922k-dot panel of similar size. Canon uses one of those on the SX60 HS, and mounts it on a vari-angle hinge so it can be viewed from above, below, or the front of the camera, just in case selfies are your thing. The SX60 HS also has a sharp (922k-dot) EVF, which is noticeably nicer to look through than the 202k-dot EVF Panasonic uses in the FZ70. The disparity isn’t as large in real life as it sounds on paper, but it’s easy to tell that the FZ70’s EVF doesn’t offer the same level of crispness as that of the Canon.

The Panasonic Lumix FZ70 / FZ72 is a 16 Megapixel super-zoom with a jaw-dropping 60x stabilised optical zoom lens. That’s the longest range available on any super-zoom camera and outreaches the hugely popular 50x Canon PowerShot SX50 HS, although to be fair Canon’s model is now a year old and likely to be updated soon. However, don’t make the mistake of assuming the FZ70 / FZ72 has a longer telephoto than other models. It has the same 1200mm maximum telephoto as the PowerShot SX50 HS, so the additional range is at the other end of the scale, providing it with an ultra-wide 20mm focal length, perfect for panoramic landcape shots and interiors.

The 16 megapixel MOS sensor is newly developed, but is no doubt a close relative of the 16 Megapixel sensor in 2012’s FZ60 / FZ62. But unlike that model the FZ70 / FZ72 now offers RAW support. The new sensor and Venus Engine processor support similar shooting modes to the FZ60 /62, including PASM control, Intelligent Auto with scene detection and Creative Control Effects. Additionally the FZ70 / FZ72 includes the Panoramic shooting mode introduced on the FZ200.