If you want a camera that is rugged, waterproof, and able to withstand a lot of abuse from the elements, but you don’t want to shell out the money for the most expensive model, or if you prefer a model that is a little bit smaller, the Panasonic TS30 should likely make it onto your short list of potential purchases. 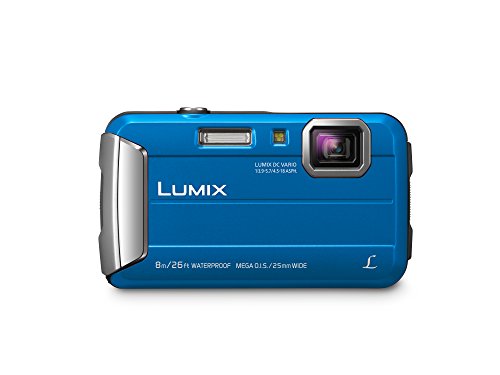 The TS30 is the successor to the TS25, which was released in 2014. It has several features that explorers on the move are likely to covet, such as the ability to withstand drops of up to 5 feet, submersion depths of up to 26 feet, temperatures as low as 14 degrees Fahrenheit, as well as dust. These attributes, along with the fact that it comes in lightweight packaging, make it an appealing alternative for skiing, scuba diving, camping, or anywhere else your quest for adventure may take you.

If you are already familiar with the TS25, there won’t be anything about the TS30 that will surprise you. The color schemes have been revised, but for the most part, Panasonic just removed white from the list of possible possibilities, so now the TS30 only comes in blue, black, and red.

The rest of the kit is virtually identical to the TS25, including the same 16.1-megapixel 1/2.33″ CCD sensor, 4x optical zoom Lumix DC Vario lens with a 25-100mm eq. Range spanning max apertures from f/3.9 (wide) to f/5.7 (tele), and a 2.7″ 260k dot LCD. However, we did notice one difference in the specifications: the amount of internal memory has doubled over its predecessor, going from roughly 70 MB to a lot more generous 220 MB. This is a significant improvement.

Advanced underwater mode and a torchlight feature have also been transferred from the TS25. These functions are essential for aiding snorkelers and scuba divers to catch life below the water’s surface.

The model features many creative choices that make it simpler to create images in a range of shooting circumstances. These options include 12 creative control modes as well as 13 scene modes. In addition, there is a useful time-lapse capability that may be used to record occurrences over time. Continuous shooting is rated at around 1.3 frames per second, although this may be increased to 8 frames per second in high-speed burst mode at the expense of a reduction in quality.

The MP4 format allows for the recording of high-definition video with a resolution of 1280 by 720 pixels at a frame rate of 30 frames per second. This device does not come with Wi-Fi, Near Field Communication, or GPS since the manufacturer wanted to keep the price lower. You’ll want to look at the Panasonic TS6, which was introduced at the same time as the TS30, for these more extensive customization possibilities.