The Sigma sd Quattro is a tiny system camera with a 39-megapixel Foveon X3 Quattro sensor that is scaled to fit the APS-C format.

The one-of-a-kind sensor in the sd Quattro produces raw photographs with a resolution of 5424 by 3616 pixels when it is set to its highest possible level. This sensor consists of four different layers, three of which are devoted to catching red, green, and blue light. 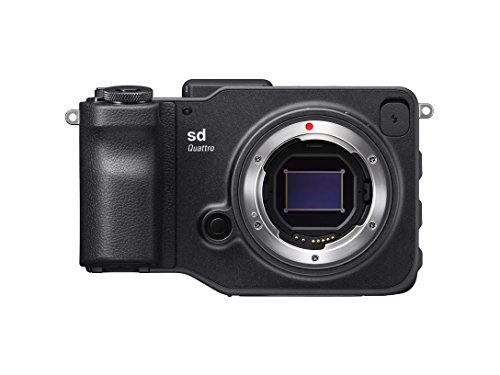 The Sigma sd Quattro is a tiny system camera with a highly distinctive design that is entirely different from any other camera that we have seen in the past. It is comprehensive and hefty, measuring 147 millimeters (W) by 95.1 millimeters (H) by 90.8 millimeters (D), and it has a highly prominent hand grip with a leatherette covering, which enables you to retain a firm grasp and accommodates a wide variety of hand sizes. The device’s dimensions are as follows: There is a sizable thumb grip on the back of the camera.

The Sigma sd Quattro is a very well-built camera that makes use of a magnesium alloy for its body. This camera is unquestionably on par with the most capable models that other manufacturers have to offer.

The sd Quattro features an understated design that is entirely black and has a gently textured surface. This, in conjunction with the camera’s higher weight, gives the camera a more professional image and feel. The fact that the tripod attachment is made entirely of metal and is placed precisely in the middle of the lens is a dead giveaway that this is meant to be a professional-grade camera.

All of the sample photographs used in this evaluation were captured at the High JPEG preset, which results in an image size that is around 13 megabytes on average.

When shooting in the RAW format, the Sigma sd Quattro produces exceptional picture quality, with excellent results from ISO 100-1600 over the whole ISO range.

Because there is a lot of noise and color desaturation at the higher ISOs, our recommendation is always to use the sd Quattro’s RAW mode if possible. Curiously, the quality drops off noticeably when shooting JPEGs, with only ISO 100-400 being worth using, thanks to the limitations imposed by the higher ISOs (despite the so-so Sigma Photo pro software and the huge file sizes).

The night shot came out well, and the fact that you could use the maximum shutter speed of 30 seconds meant that you could catch sufficient light for the vast majority of after-dark scenarios.

Once again, if you enjoy shooting photographs in a more relaxed manner, the sd Quattro will reward you with some stunning images, provided that you can get along with the “strange” user interface.

The Foveon X3 Quattro sensor makes a comeback; regardless of whether you think it has the 39 megapixels that Sigma claims it has or the inherent 20 megapixels of the top blue/luminance layer, it is capable of producing photographs that are extremely clear and high in quality.

Since this is a tiny system camera, you can use any Sigma SA-mount lens. This is in contrast to the DP Quattro compact cameras that were popular a couple of years ago, as those had fixed lenses.

Despite some improvements to the operational speed in the form of not one but two Truepic III processors, the Sigma sd Quattro is still a rather unresponsive camera that is only suited to shooting static or slow-moving subjects. This is especially true given that the combined phase/contrast-detection AF system still takes about half a second to lock on to the subject after it has been detected.

The most recent radical new design is again divisive among consumers. The Sigma sd Quattro is comparable in size and weight to a DSLR camera, but its battery life is startlingly inadequate for a contemporary camera. However, we did like making use of the outstanding EVF as well as the rear LCD panels.