The new Sony A37 is an entry-level interchangeable lens camera that utilizes Sony’s proprietary Translucent Mirror Technology to provide high-speed shooting in a chassis far more compact than previous models. 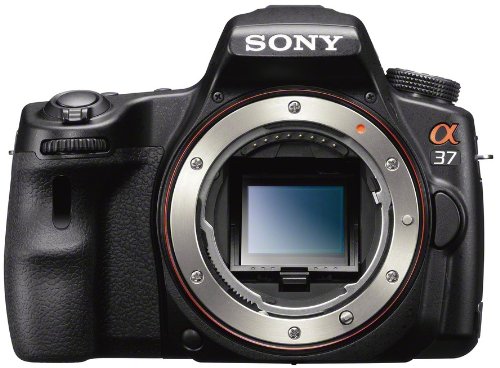 The 16.1-megapixel A37 features 7 frames per second burst shooting, full 60/50i AVCHD video with control over exposure and continuous autofocusing, a 15-point phase-detection autofocus system with 3 cross sensors, an ISO range of 100-16000, a 2.7-inch tiltable LCD screen, a high-resolution Tru-Finder (Electronic Viewfinder) with 100% coverage, 3D Sweep Panoramas, Auto HDR, and Multi-frame Noise Reduction The Sony A37 body with the 18-55mm f/3.5-5.6 zoom lens may be purchased together for a total cost of £530 or $600.

The new Sony SLT-A37, on the surface, appears to be virtually identical to the more costly A57 model placed above it in the hierarchy of Sony products. As was the case with its before, the A37 lacks an optical viewfinder in favor of an electronic one. It uses a fixed semi-translucent mirror instead of the movable non-translucent mirror found in DSLRs.

Because the mirror of the A37 is translucent, sufficient light can pass through it to the sensor, which enables the sensor to remain fixed at all times. The A37’s mirror also can reflect some of the light onto a phase-detection auto-focus array that is located at the top of the body of the camera.

Because of this combination, the Sony Alpha A37 can offer full-time DSLR-like focusing speeds, even while recording video. Additionally, it is equipped with an excellent Live View system that provides 100% scene coverage and a quick continuous shooting rate of 7 frames per second, all while being physically smaller and lighter than a comparable DSLR.

The Sony A37 weighs 506 grams and has dimensions of 124.4 x 92 x 84.7 millimeters, making it a bit more compact and portable than its predecessor, the Sony A57. The A37, which has a body made of plastic and is the least expensive SLT, is just the appropriate size and, in terms of its structure, it is spot on.

The A37 is a solid piece of equipment with a build quality that is on par with competing DSLR cameras in the same price range. In the end, it is neither inexpensive enough to put you off nor robust enough to compete with more expensive models. Even though it has a slightly plastic-y feel, the A37 is still a solid kit.

During our evaluation, the Sony A37 captured photographs of exceptionally high quality. The ISO range of the Sony A37 is highly useable and stretches from 100 to 16000. The range from 100 to 800 ISO is noise-free, while the range from 1600 to 6400 ISO delivers results that are more than acceptable, and even ISO 12800 and the fastest setting of 16000 are appropriate for usage in an emergency.

The 16-megapixel images come out of the camera a little soft when using the Standard creative style as the default. For the best results, you should sharpen them some more utilizing an application like Adobe Photoshop; alternatively, you can adjust the level of sharpening that the camera applies automatically.

When shooting at slower shutter speeds while holding the camera by hand, the built-in SteadyShot anti-shake feature performs quite well.

The High Dynamic Range mode combines the results of two separate images taken at various exposures into a single image. The result is an image that has a higher dynamic range than what would be produced by a single photograph. However, it does yield some excellent effects even though it can only function with JPEGs and stationary subjects. Even after all these years, using Sony’s Sweep Panorama is still a delightful experience.

The 11 creative effects allow you to produce unique looks quickly, which would otherwise require you to spend a significant amount of time in the digital darkroom. On the other hand, the 6 Creative Styles provide a quick and simple method for adjusting the JPEG images captured by the camera.

The Sony A37 is a compelling entry-level DSLR camera that outperforms its primary competitors in terms of features, still and video picture quality, and overall performance. An otherwise great camera that will more than fulfill the requirements of its intended users is let down by a non-articulating LCD screen that is just a few inches in size and does not support an exceptionally high resolution.

The A37 is the most affordable SLT camera since it combines most of the essential capabilities in its older and larger sibling, the A57, with the more compact body seen in its predecessor, the A33.

Thankfully, this has not been accomplished by limiting the capabilities of the A37, except for the LCD screen. The A37 boasts an extensive list of desired features that belie its relatively cheap price tag. The electronic viewfinder found on the A37 may not have quite the same level of detail as the one found on the A65 and A77 models. However, it still has sufficient resolution to compete with and outperform a more traditional optical viewfinder.

The electronic viewfinder (EVF) and transparent mirror of the A37 offer up a whole new world of possibilities for Sony, including rapid burst shooting rates, fast autofocus for still images and video, and complete coverage of any given scenario.

Image quality is good, with the results from the 16 APS-C sensors rivaling the major DSLR competition and, in most cases outperforming the Compact System Camera alternatives. This is especially true if you wish to produce shallow depth-of-field effects with your photographs.

Even though noise doesn’t become visible in JPEGs until ISO 3200, the A37 does some rather substantial noise reduction to keep the files clean. Unfortunately, this causes a considerable loss of finer detail in the images.

You can get the most out of the A37, especially if you want to experiment away from a computer, thanks to the plethora of creative effects that are offered, such as HDR, Dynamic Spectrum Optimisation, creative styles, the novel sweep panorama mode, and the range of in-camera Picture Effects.