As Sony’s flagship APS-C Alpha product, the Sony A6300 succeeds the A6000, which has been on the market for two years. The A6300 keeps the same outer design as its predecessor, but the new camera has full weather sealing to prevent dust and moisture from entering the device. 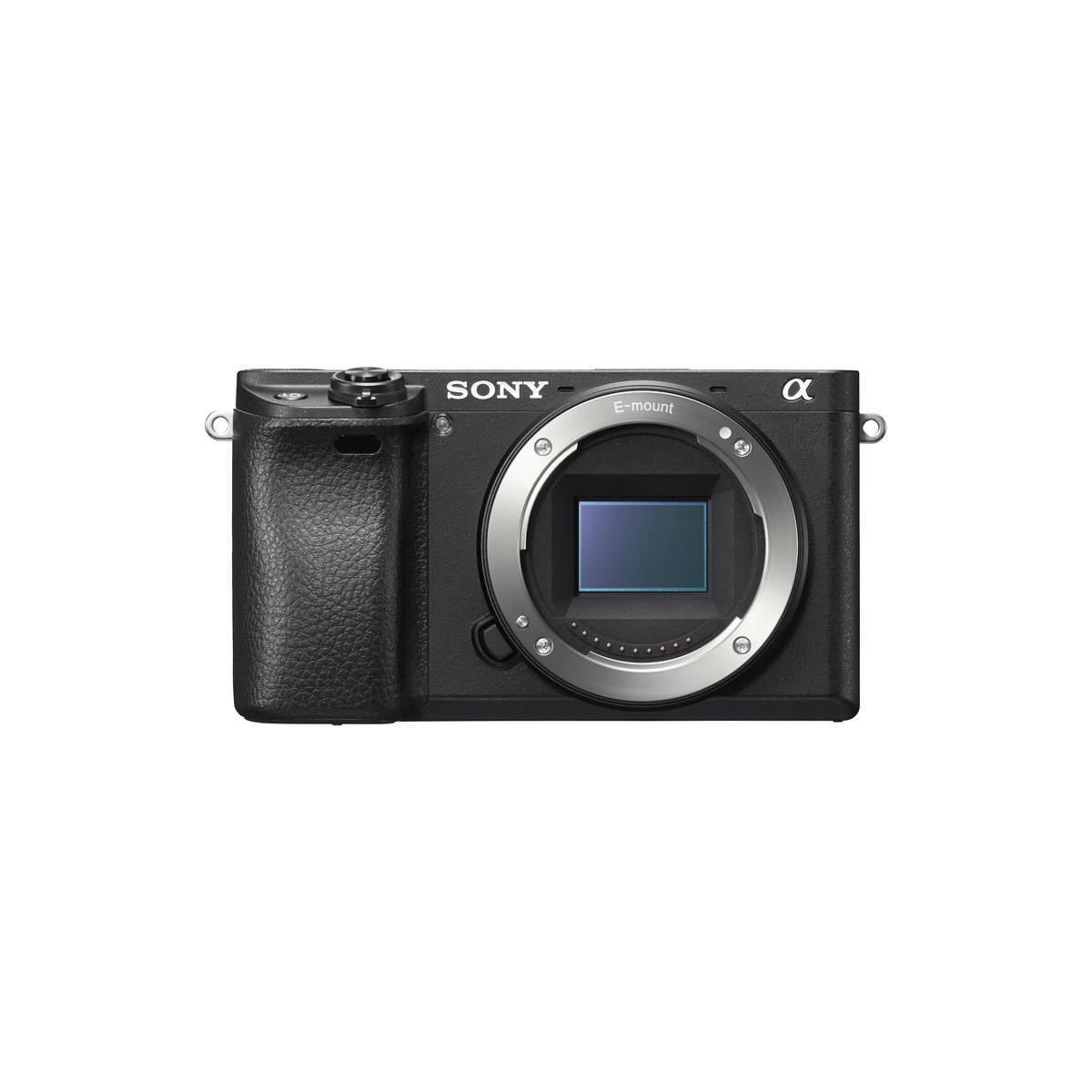 On closer inspection, however, one will notice that the most significant shifts occur beneath the refortified surface. In addition to recording Full HD 1080p video at 120 frames per second, the A6300 can now record Ultra HD video at a resolution of 3840 by 2160 at 30 frames per second. The A6300 can register at an ISO of 51200 thanks to its superior light sensitivity, which is made possible by the cutting-edge design of the 24.2-megapixel sensor.

The autofocus performance has also been significantly improved, and the camera now boasts no fewer than 425 phase-detection AF points that cover practically the entirety of the image frame. This helps to ensure precise subject tracking, and with the assistance of Sony’s fast Bionz X image processor, the A6300 is said to have a focusing speed of only 0.05 seconds.

Considering the comprehensive control customization, built-in Wi-Fi, enhanced viewfinder with 2.36 million dots, and tiltable 922k-dot LCD screen of the Sony A6300, the body-only pricing of £999/$998 seems to be well justified.

The Sony A6300 has a design that is quite similar to the now-retired Sony A6000, and this is not a bad thing at all because the design and control arrangement is both extraordinarily user-friendly and ergonomic. The sculpted hand grip is not especially deep, yet, it is somewhat broad and provides a comfortable grip despite its lack of depth.

When shooting with one hand, the A6300 provides a sense of unwavering confidence thanks to its substantial back thumb rest. Beneficial since the new camera weighs in at 404 grams when combined with its battery and memory card, which is 60 grams more than its predecessor. The A6300 has dimensions of 120 millimeters in length and 66.9 millimeters in breadth, but it is 3.7 millimeters thicker, coming in at 48.8 millimeters.

This additional weight gain is due to utilizing a newly developed, more robust magnesium alloy body shell with comprehensive weather sealing. It is the crowning achievement of a design that exudes quality and contributes to the justification of the high price tag.

The outside of the camera has seen very few changes; nevertheless, this does not mean that Sony has not modified any of the camera’s other external components. The 1.33 million dots electronic viewfinder found in the A6000 has been replaced in the A6300 with the 2.36 million dot OLED electronic viewfinder seen in the RX10 II. This provides a valuable improvement in resolution.

The new viewfinder also has a preset for a high frame rate of 120 frames per second, which makes it possible to follow moving subjects more smoothly and with almost no lag. When taken together, these factors produce a viewing experience that is uncannily accurate to the real world in terms of color, detail, and contrast.

The same can be said about the 3-inch widescreen LCD, even though it still possesses the exact 922k resolution as the A6000. Additionally, it makes use of a tilting bracket that is equivalent to others, providing 90 degrees of rotation in the upward direction and 45 degrees of tilt in the downward trend. When photographing from a high or low perspective, it’s a massive aid, but an even more adaptable solution would be to have the screen fold out.

Unfortunately, Sony did not include touch sensitivity on the display of the A6300. This would have made some operations, such as the selection of the focus point, much simpler and more apparent, in addition to placing extra pressure on the competitors of the A6300.

The sensor resolution of the Sony A6300 is roughly equal to that of the A6000 at 24.2 megapixels, but the A6300’s technology has concealed other depths that were not there in the A6000. Sony accomplished the same data transmission speed utilizing smaller gauge cabling by switching out the aluminum data transfer wire that surrounds each photosite on the sensor for an alternative made of copper.

This frees up space, which may then be used to increase the size of the photosites and their sensitivity to light, which, in turn, improves the signal-to-noise ratio of the sensor and decreases picture noise. It is because of this technological advancement that Sony was able to increase the A6300’s maximum sensor sensitivity to ISO 51200.

When taken together, these factors result in visual quality that is quite remarkable. While the Sony A6300 and the Canon 1300D that were also being assessed belong to quite distinct market categories, the results of our side-by-side comparison testing made it abundantly evident that APS-C picture quality has advanced significantly in recent years.

Whereas the aged 18MP sensor in the Canon struggles to create acceptable low-light image quality at ISO 3200, the A6300 can produce immaculate photos at the same sensitivity with minimum grain and detail loss. This sensitivity setting is entirely workable even though there is a minor rise in noise and a decrease in detail when using ISO 6400.

Only at an ISO setting of 12800 does the grain and detail smoothing become more pronounced, even though it is not at all unpleasant to look at. Due to the high amount of grain, loss of information, and limited dynamic range, ISO 25600 is essentially the ceiling for acceptable image quality. Using this setting is not recommended. Because of the distracting grain and color speckling, ISO 51200 is a setting that should be avoided if possible.

However, if you turn things down to more reasonable sensitivities, the A6300 can record an exceptional dynamic range, particularly when helped by Sony’s Dynamic Range Optimisation. The ability to accurately reproduce colors while yet retaining a good color vibrancy helps the overall visual attractiveness of an image; however, the settings of your camera allow you to customize this quality to suit your tastes.

Our Vario-Tessar 16-70mm f/4 ZA OSS test glass undoubtedly helped maximize the A6300’s capacity to resolve a remarkable level of information. Still, the amount of detail that can be captured will depend quite a little on the lens that you choose to use.

It is important to note that the A6300, in contrast to Alpha bodies such as the a7 II, does not have sensor-shift stabilization and instead depends on the more traditional lens-based optical stabilization.

Increasing the camera’s sensor sensitivity to adjust for camera shake isn’t a huge concern owing to the A6300’s decent high ISO image quality. This is true even if you don’t have an optically stabilized lens attached to the camera.

Because of the widespread recognition that Sony’s Alpha 7 and RX series cameras have received over the past several years, the company’s APS-C CSCs have begun to give off the impression that they are being overlooked. To our great relief, Sony has revitalized the NEX family of cameras with the release of the A6300 model.

It may look similar to 2014’s A6000. Still, Sony’s decision to keep the same ergonomic design and easy control arrangement makes a lot of sense, even though it may give the impression that the two cameras are almost identical. Why try to fix something that isn’t broken? However, this theory does have one drawback, and that is that it does not have a display that is sensitive to touch.

It is a peculiar omission considering that Sony currently provides a touch-enabled LCD with the A5100 camera model. Much while the A6300 works quite well with the standard controls it has, having the option to tap a focus point or utilize touch gestures when playing back footage would make the camera even simpler to operate.

Load more
As Sony's flagship APS-C Alpha product, the Sony A6300 succeeds the A6000, which has been on the market for two years. The A6300 keeps the same outer design as its predecessor, but the new camera has full weather sealing to prevent dust and moisture...Sony a6300 Review