The new Sony A68 is an interchangeable lens camera that uses Sony’s Translucent Mirror Technology to allow for rapid shooting while simultaneously reducing the size of the camera’s body. 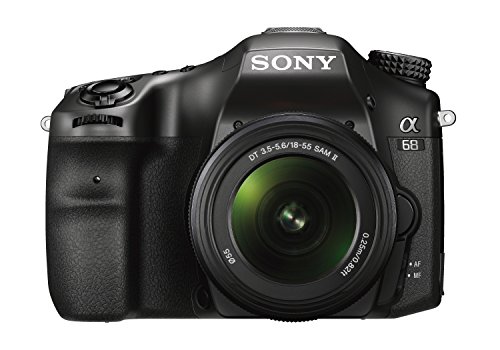 The 24.2 megapixel A68 is equipped with a burst shooting speed of up to 8 frames per second, the ability to record 1080p Full HD movies in the XAVC Sv format, a 79-point auto-focus system that includes 15 cross points, and a dedicated F2.8 AF sensor point, in-body image stabilization, a 2.7-inch tilting LCD, an XGA OLED electronic viewfinder with 2359k dot resolution, a backlit top LCD,

When compared to a conventional DSLR camera, a camera that utilizes Translucent Mirror Technology has a translucent mirror that is fixed in place. This mirror divides the optical pathway between the primary image sensor and a separate phase-detection autofocus sensor.

Additionally, the camera’s mechanical design is more straightforward, which enables it to be more compact. The body only of the Sony A68 may be purchased for $599 in the United States and £480 in the United Kingdom.

The Sony A68 has an appearance comparable to that of the company’s flagship A77 II model. The A68 replaces the traditional optical viewfinder with an electronic one and employs a fixed semi-translucent mirror in place of the moving non-translucent mirror found in a DSLR camera.

Because the mirror of the A68 is translucent, sufficient light can pass through it to the sensor, which enables the sensor to remain fixed at all times. In addition, the mirror can reflect some of the light onto a phase-detection auto-focus array located at the top of the A68 body.

Because of this combination, the A68 can offer focusing speeds comparable to those of a full-time DSLR even while recording video. Additionally, it has an excellent Live View system that provides 100% coverage of the scene and a respectably fast continuous shooting rate of 8 frames per second, all while being physically smaller and lighter than a comparable DSLR.

The Sony A68 has dimensions of 142.6 x 104.2 x 82.8 millimeters and weighs 596 grams. It has dimensions that are comparable to those of the A77 II. Even though it has a plastic body, the A68 is a sturdy piece of equipment; nonetheless, it does not have the same level of weatherproofing as the more costly A77 II.

The night shot turned out well thanks to the camera’s maximum shutter speed of 30 seconds and its Bulb mode, which allow lots of room for creative experimentation during nighttime shooting. When shooting at slower shutter speeds while holding the camera by hand, the built-in SteadyShot anti-shake feature performs quite well.

Even after all of these years, they are using Sony’s Sweep Panorama is still a delightful experience. Picture Effects offer a quick and simple method for modifying the JPEG photographs produced by the camera. At the same time, the Creative Styles enable you to develop unique looks in a short amount of time, which would generally need you to spend a significant amount of time in the digital darkroom.

The auto-focusing capability of the Sony A68 is on par with that of the top-of-the-line A77 II camera, making it an excellent choice for anyone looking for an alternative to a DSLR in the mid-range price bracket.

The 24.2 APS-C sensor also produces exceptionally high-quality images for the camera. Although the A68 applies some rather substantial noise reduction to keep the files clean, as indicated by the considerably noisier RAW photos, noise doesn’t appear until ISO 1600 for JPEGs, and even the fastest settings prove to be perfectly acceptable.

Getting the most out of the A68 is made more accessible because of the plethora of creative effects that it offers, including HDR, Dynamic Range Optimisation, innovative styles, image effects, and the tried-and-true sweep panorama modes.